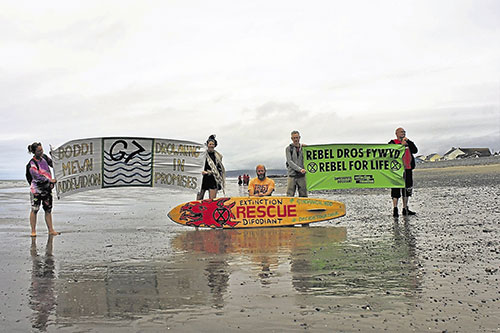 ‘People shout “have a wash”, “get a job” but I have a full-time job’. Curly, one of the Cardiff Red Rebel Brigade who performed in Porthcawl on 5 June, explains that the Rebels are ‘everyday, regular people’, taking action for change.

‘We’re urging world leaders to act now. Out politicians and our governments are failing us all at the minute and we need them to act now on the real causes of the crisis. We need them to act on global inequality, unchecked corporate profiteering and neocolonialism. We’re really drowning in promises and we need urgent, meaningful action to prevent climate and ecological chaos.’

The Porthcawl action was part of the ‘Make the Wave’ action in more than 80 UK coastal communities to highlight local effects of sea level rise and, specifically, to send a message to the G7 summit in Cornwall, to urge world leaders to prioritise action against climate change.

Along the Welsh coastline, action took place in many locations. Curly pointed out that ‘three million people are predicted to be affected by annual flooding in the UK by 2050. Cardiff itself is the sixth most at-risk city in the world from ocean-based flooding.’

Further up the Welsh coast, on 9 June, Cardigan took part in the Wave with an information stand on the Quay, street theatre by Small World Theatre and a large artwork on Poppit Sands by St Dogmaels sand artist, Rachel Shiamh. The public were invited to participate and leave their own message in the sand. The installation was filmed by drone and sent to the G7 leaders. King Canute appeared with his ‘rabble’ of (socially-distanced, of course) courtiers to challenge the sea, attempting to hold back the tide.

The groups also acted jointly in Aberystwyth with the Aberystwyth branch of the Climate and Ecological Emergency Bill Alliance. Activists followed the floodlines of the local rivers to the sea, handing out leaflets with maps of expected 2030 flooding of the area.

A wave was carried round town and people were invited to draw sea creatures on the pavement, before gathering on the beach.

Susanna Kenyon explained how she developed the idea for the event: ‘The leaflets we were handing out were taken from Climate Central (CC). I came across CC last August when I was reading an article in Wales Online about how Cardiff would be largely submerged by 2050. Then I saw the BBC using them as a resource on the programme about Bangladesh, Climate Change: Ade on the frontline.

‘When I used the CC tools to look at annual flood risks in our local area in just a few years’ time, 2030, I was horrified for our own coastline, but if you look at the maps for Thailand, Bangladesh, Vietnam, your heart breaks.

‘All that wonderful fertile agricultural land becoming salinated and useless for food production – what will the populations do? At present they are already migrating to their capital cities. Consequently, it felt right to use the CC maps in our Wave Action.’

Susanna continued: ‘We all agreed that the climate crisis has to be the G7’s top priority, but that they have to show the world that they mean it by actually coming up with the resources and solidarity for vulnerable nations to address unsustainable debt and accelerate climate investments.’

Susanna added: ‘We love the pageantry and fun of climate change actions. We told the story of Seithenyn [a prince who neglected the sluices and sea defences and caused the submerging of the realm of Gwyddno] and took his image (a strangely familiar Boris look) to the water’s edge, expecting to stage a rescue attempt at high tide. However, children on the beach kept rescuing him little by little as the tide came in! So, we still have him for another day.’

In North Wales, climate activists gathered in Penmaenmawr, Conwy. They featured stories from those already affected by sea level rise, children’s letters to the Earth, litter-picking and a ‘litter-pickers’ dance’, the Red Rebel Brigade and more.

The action comes as oceanographers from Bangor University warn that rising sea levels could cut off the A55, wash away railways and swamp north Wales’ coastal communities by the end of this century.

A retired resident of Fairbourne, a Gwynedd village already set to be decommissioned in the face of sea level rises, said: ‘I feel very strongly that, since the Paris agreement, little to nothing has been done about the urgency related to climate change. I truly believe that the promises are fickle and duplicitous.’

Will the G7 listen?