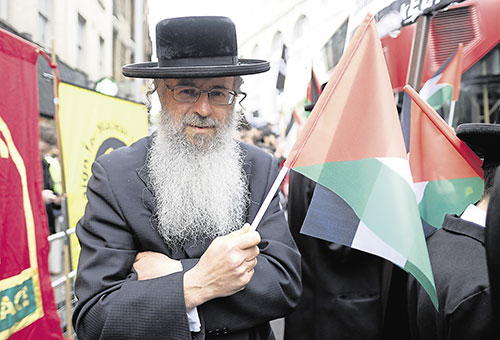 Opinion is changing within and beyond the Jewish community. Defence of the Israeli state’s actions is becoming more and more difficult even while there continues to be understanding for the desire for a safe haven for Jews.

For more and more Jewish people, the risk of rejection by friends and families is nothing compared to the risk of not speaking out, of not saying loudly and clearly: ‘Not in my name!’

There is a mistaken impression – spread by the mainstream media and Jewish establishment organisations – that all Jewish people support the actions of the Israeli state.

In this view, those Jews who do not ‘support Israel’ are (at best) an insignificant minority who do not count.

However, as with any other community, there is a range of views among Jews about most things, including, of course, Israel.

Jewish people who do not agree with this false picture are often subjected to untrue and harmful statements.

This goes especially for those Jews who are critical of Zionism and/or highlight the injustices experienced by Palestinians at the hands of the Israeli state.

They are, for example, accused of being: self-hating, Jews in Name Only (JINOs), antisemitism-deniers and, worse, being ‘kapos’.

Kapos were prisoners in Nazi concentration camps who collaborated with the SS, serving in leadership or administrative roles over other prisoners.

Many of us in Jewish Voice for Labour sum all this up as being ‘the wrong sort of Jews’.

We consider it to be antisemitic to assume that all Jews have one opinion.

We acknowledge that for many Jewish people and mainstream organisations, Israel is a central part of their Jewish identity.

On the other hand, for the strictly Orthodox Haredi Jews, for example, Judaism is the centre of their Jewish identity.

Many Jews – secular or religiously-observant – place justice at the centre of their identity.

This might be because of the Torah’s call: ‘Justice, Justice, Thou shalt pursue’ (Deuteronomy 16:20). (The first five books of the Hebrew Bible, including Deuteronomy, are known as ‘the Torah’.)

This is one of the central declarations of the Torah, echoed in many other instructions. For example: ‘You shall not be partial in judgment; hear out low and high alike. Decide justly between the Israelite and the stranger alike.’ (My emphasis.)

Their emphasis on justice might be because centuries of Jewish oppression have heightened their recognition of, and sympathy for, those experiencing oppression, especially when it is because of something people are born with, such as their race, faith or nationality.

“There was a very visible Jewish presence making it clear that there were Jewish people who stood with the Palestinians.”

There have always been non-Zionist or critical Jewish voices, albeit changing from a majority to a minority Jewish voice since the Second World War and the horrors of the Nazi Holocaust.

Today, in country after country, Jewish organisations supporting Palestinian rights are getting stronger and stronger and, consequently, coming in for more and more criticism.

In the UK, the Jewish Socialists’ Group was one of the first to speak out for Palestinian rights.

Then, in 2002, Jews for Justice for Palestinians was set up.

More recently, Na’amod: British Jews Against Occupation was created. Its members are generally both younger and also more religiously observant than those Jewish groups that have existed for longer.

The biggest such organisation is Jewish Voice for Peace (JVP) in the US – where around 5.7 million Jewish people live (a number similar to that in Israel).

As well as being much larger (around 15 times bigger), JVP is also younger and more diverse than most groups in Europe. The group has also mobilised to support Black Lives Matter and to protest against immigrant detention centres and much more.

Jewish Voice for Labour is working with colleagues from JVP and Jewish organisations in Argentina, Australia, Belgium, Canada, Chile, France, Germany, New Zealand, the US and, of course, Israel.

Israeli opponents of the occupation of Palestine can be more free to speak out than those of us in many other countries, despite the clampdown on opposition in Israel and despite the oppressive laws that reinforce the second-class status of Palestinians.

One reason for their greater freedom to speak out is the spread of the so-called definition of antisemitism (from the International Holocaust Remembrance Alliance) which has limited free speech on Israel.

This is the title of a Human Rights Watch (HRW) report published in April: A Threshold Crossed: Israeli Authorities and the Crimes of Apartheid and Persecution.

HRW write: ‘In pursuit of this goal, authorities have dispossessed, confined, forcibly separated, and subjugated Palestinians by virtue of their identity to varying degrees of intensity. In certain areas, as described in this report, these deprivations are so severe that they amount to the crimes against humanity of apartheid and persecution.’

B’Tselem published This Is Apartheid in January.

Their report says: ‘The entire area Israel controls between the Jordan River and the Mediterranean Sea is governed by a single regime working to advance and perpetuate the supremacy of one group over another.

‘By geographically, demographically and physically engineering space, the regime enables Jews to live in a contiguous area with full rights, including self-determination, while Palestinians live in separate units and enjoy fewer rights.

‘This qualifies as an apartheid regime, although Israel is commonly viewed as a democracy upholding a temporary occupation.’

Jewish people in the US are starting to agree.

A quarter of US Jews (25 percent) now agree that Israel ‘is an apartheid state’, according to a poll published on 13 July.

Some 22 percent agreed that ‘Israel is committing genocide against the Palestinians’.

Only nine percent of US Jewish voters agreed that ‘Israel doesn’t have a right to exist’.

Among US Jews under 40, however, agreement reached 20 percent.

More than a third of under-40s agreed that Israel is an apartheid state.

The survey of 800 voters was carried out by GBAO Strategies at the end of June, after the most recent Israeli attacks on Gaza.

The poll was commissioned by the Jewish Electorate Institute (led by Jewish Democrats). It had a 3.5 percent margin of error (six percent for those under 40).

Incidentally, back in 2015, 58 percent of British Jews agreed with the statement that Israel ‘will be seen as an apartheid state if it tries to retain control over borders that contain more Arabs than Jews’. That was an Ipsos Mori poll for the Jewish group Yachad.

The right to resist

Earlier this year, the sight of Palestinian houses being demolished or being taken over by settlers in Jerusalem led to actions from Gaza, in the West Bank, in East Jerusalem and throughout the Palestinian diaspora.

In response, Israel carried out a heavy bombardment of Gaza.

On many of the demonstrations around the world, there was a very visible Jewish presence with banners and very often speakers making it clear that there were Jewish people who stood with the Palestinians.

It is clear that as ordinary people learn more about what is happening to Palestinians, they are increasingly siding with them and regarding the Israeli state as the oppressor, despite huge sympathy for those dreadful historical experiences of the Jewish peoples across centuries.

Leah Levane is co-chair of Jewish Voice for Labour: jewishvoiceforlabour.org.uk