Joel Bakan, The New Corporation: How ‘Good’ Corporations Are Bad For Democracy 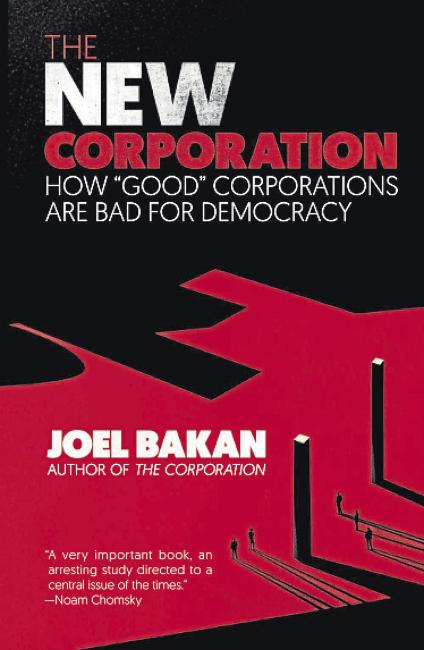 Joel Bakan’s The Corporation: The Pathological Pursuit of Profit and Power, was published in 2004 alongside a film documentary of the same name. Those were timely and influential assaults on the central institution of contemporary capitalism.

Bakan has now written a sequel, a response to the ‘trend of corporations claiming to be different, to have changed into caring and conscientious actors – ready to lead the way in solving society’s problems.’ This shift is, it seems, a reaction to public concern. Larry Fink, of investment management firm BlackRock, wrote to business leaders in 2018: ‘Society is demanding that companies serve a social purpose.’

Bakan, professor of law at the University of British Columbia, is having none of it.

‘Making money for themselves and their shareholders remains their top priority’, he notes about these ‘new’ corporations. ‘So while they might care about social and environmental values, they care only to the point such caring might cut into profits.’

Despite their progressive-sounding public rhetoric, these profit-seeking entities fight against policies aimed to promote social welfare – including workers’ rights and unions, taxes on wealth, and regulations that restrict the power of big business to rule the world.

Bakan weaves several shocking examples of corporate wrongdoing into the book, including Volkswagen fitting a ‘defeat device’ in diesel engine cars sold in the US. This detected when the car was being tested and changed its environmental performance to improve results.

Elsewhere, Bakan highlights how Johnson & Johnson were caught hiding from consumers and regulators the fact that some of its products used by children included harmful materials.

With corporate influence weakening democratic institutions, Bakan’s solution is more and deeper democracy – to ‘expand the floor of the cage’, as Noam Chomsky says.

‘Protest is not enough’, Bakan argues. ‘Electoral movements are needed to put sovereign power behind the values and energy people express in the streets’. He highlights the successes two municipal politicians have had in taming corporate power: activist-turned-mayor of Barcelona Ada Colau and Seattle city councillor Kshama Sawant, who was re-elected in 2019 despite a multimillion-dollar lobbying effort by Amazon.

Though perhaps not as hard-hitting or revelatory as his 2004 book, The New Corporation is nevertheless a hugely important polemic.

Written in an accessible journalistic style, with plenty of footnotes for those wishing to investigate further, it could be a valuable and inspiring campaigning tool for both experienced anti-corporation activists and those new to the topic.