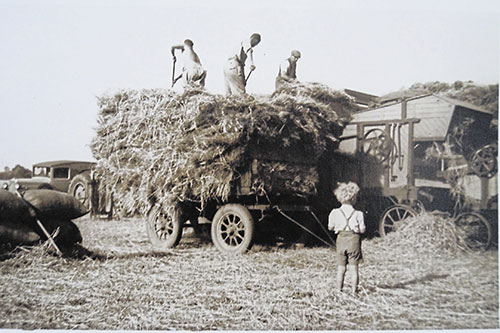 The young Martyn Thomas watching the unloading of sheaves of corn at Frating Hall Farm, circa 1948. BY KIND PERMISSION OF MARTYN THOMAS.

When pacifism and ‘the new life’ headed to the countryside

Following the horrors of the First World War, many people – especially those with strong religious beliefs – turned to pacifism. This included those who had fought and suffered in the trenches and resolved: ‘Never again’.

Vera Brittain’s memoir of the loss of her fiancé, her brother and her two best male friends in the carnage, first published in 1933, went on to sell 120,000 copies. Testament of Youth made her a formidable public figure.

As a leading campaigner against war, Brittain joined the charismatic Anglican priest and dean of Canterbury, Dick Sheppard, in setting up the Peace Pledge Union (PPU) in 1936, along with the poet Max Plowman and the literary critic and close friend of DH Lawrence, John Middleton Murry.

By the end of the 1930s, the PPU had nearly 100,000 members, all of whom had signed this pledge: ‘War is a crime against humanity. I renounce war, and am therefore determined not to support any kind of war. I am also determined to work for the removal of all causes of war.’

Back to the land

Much of this story is well-known. Less known is the rapid and widespread cultivation of links between pacifism and agrarianism, or the ‘back-to-the-land’ movement, which took root at the same time, and to which it was strongly related.

Farm work offered a way for pacifists, as non-combatants, to remain within the law, and a lot of those who would be conscripted made this choice.

At this time, two proto-pacifist settlements in Essex played a major role in developing the link between the peace movement and farming. Brittain, Sheppard, Plowman and Murry were involved in both: the Adelphi Centre in Langham (1934 – 1942) and Frating Hall Farm (1943 – 1954).

The former was nominally a socialist education centre with a degree of agricultural self-sufficiency; the latter a full-blown Christian pacifist community based on a 300-acre farm providing a home for more than 50 people, including refugees and former prisoners-of-war.

While the Adelphi Centre is remembered for its links with George Orwell, Middleton Murry and other intellectuals, the story of Frating Hall Farm – a far more compelling story – has until now remained ‘hidden from history’.

In No Matter How Many Skies Have Fallen: back to the land in wartime Britain, I have tried to bring to life again the unique world of the Frating community, based on the reminiscences of those who grew up there, supplemented by personal artefacts, documents, photographs and other memorabilia.

The book’s title is taken from the opening paragraph of Lawrence’s novel, Lady Chatterley’s Lover, first published in 1928, a work full of references to ‘the new life’, a heady and persuasive mixture of political idealism, lebensreform [lifestyle reform] and sexual freedom, to which many at this time subscribed (in theory if not in practice):

‘Ours is essentially a tragic age, so we refuse to take it tragically. The cataclysm has happened, we are among the ruins, we start to build up new little habitats, to have new little hopes. It is rather hard work: there is now no smooth road into the future: but we go round, or rather scramble over the obstacles. We’ve got to live, no matter how many skies have fallen.’

Now published, No Matter How Many Skies Have Fallen offers a kaleidoscopic history of the Frating community during its 11-year occupation, as well as documenting the passionate religious and political ideals of the back-to-the-land movement in wartime and postwar Britain.

“Farm work offered a way for pacifists, as non-combatants, to remain within the law.”

Not only had Plowman been involved in the setting up of the PPU in 1936, he also established the ‘Forethought Committee’, one of whose principal objectives was advocating farm work and humanitarian aid as an alternative to military conscription.

The overlap between pacifism and agrarianism was not only promulgated by the PPU. In addition to Plowman’s enthusiasm for agricultural communes, a PPU member, Henry Carter, had started to organise the Christian Pacifist Forestry and Land Units.

Not surprisingly, the Quakers had already been active in this field, supporting smallholding schemes in England after the First World War, known as ‘Group Holdings’. These were aimed at unemployed miners.

The first scheme was launched at Potton in Bedfordshire, but the scheme soon came to Essex, leading to the formation of the Land Settlement Association (LSA) in 1932 (traces of which can still be found in parts of rural Britain).

In a moving collection of short memoirs written by conscientious objectors during the Second World War – and published by the ‘Friends of Colchester and Coggeshall Monthly Meeting’ – two contributors reflect on their experiences.

Hugh Clunes recalls that a Chelmsford Quaker and businessman, on declaration of war, promptly sold his family home and bought a 150-acre farm nearby where ‘he would employ as many Conscientious Objectors (COs) as possible and the group would live together as a community with free board and lodging and a little pocket money.’ The farm soon was able to provide work and shelter for eight adults and three children.

Bill Skinner, then a Methodist, ‘decided to follow my ancestors onto the land and went to a small community farm at Clavering in Essex run by War Resisters International.’

Not all COs faced public disapproval. Hospital worker Albert Pike, tells a remarkable story. ‘One memory sticks out: the number of men who came up to shake my hand when I registered as a CO at Romford Labour Exchange in 1940. All eyes were on me when I walked forward to answer the clerk’s shout of “Where’s that CO?” I’m sure he was as surprised as I was at the reception I got from the crowd.’

In 1947, anarchist George Woodcock – friend and later biographer of Orwell, a pacifist who would spend much of the Second World War working on a farm in Suffolk – reflected on this rapprochement between pacifism, agrarianism and communitarianism in his short book, The Basis of Communal Living. This described the growth of pacifist sentiments in Britain in the 1930s, and the transformation of these sentiments into the practical business of setting up self-sufficient communities:

‘In the years before and during the war, there has been a strong movement to found communities in Britain, arising largely out of the peculiar circumstances of the British pacifist movement at the beginning of the war. The communities which arose during this period were numerous, running into several hundreds. Some lasted only a few months – others are still alive and thriving after seven or eight years. Their sizes range from two or three up to a hundred members; their theoretical approaches were equally varied, ranging from Christian mysticism to materialist anarchism, while they presented a variety of economic structures, and their functions ranged from farming units to living communities in towns, from free schools to travelling theatre groups. The majority, however, were connected in some way with agriculture.’

All those I interviewed while researching the story of Frating Hall Farm had been children when they lived there.

All recalled growing up with an extraordinary sense of freedom and happiness, coming and going into each other’s houses to eat or sleep, wandering the fields and woods when not at school, playing in the barn, feeding the animals, going on trips to the seaside on the back of a lorry, and much else.

The young Shirley Williams, who sadly died earlier this year, had, on leaving school, taken up the job of second cowman at Frating, as her mother, Vera Brittain, had been a keen supporter of both Langham and Frating.

It was only in adult life that those I spoke to realised how difficult it had been for their parents at times, yet all remembered the community with pride in what had been attempted and for a while achieved.

The story of Frating Hall Farm provides a new chapter in the history of pacifist communitarianism, and the ways in which the peace movement intersected productively with rural issues.

As concerns are raised again on the ways in which industrialised farming practices are in danger of reducing the countryside to a series of animal factories and sterilised plains, environmental politics offers renewed opportunities to bring together the cause of peace and the cause of preserving the natural estate.

The young Martyn Thomas watching the unloading of sheaves of corn at Frating Hall Farm, circa 1948. BY KIND PERMISSION OF MARTYN THOMAS.

Ken Worpole is an author and social historian. No Matter How Many Skies Have Fallen: back to the land in wartime Britain is published by Little Toller Books, 2021 (£14).