David Wallace-Wells, The Uninhabitable Earth: A Story of the Future 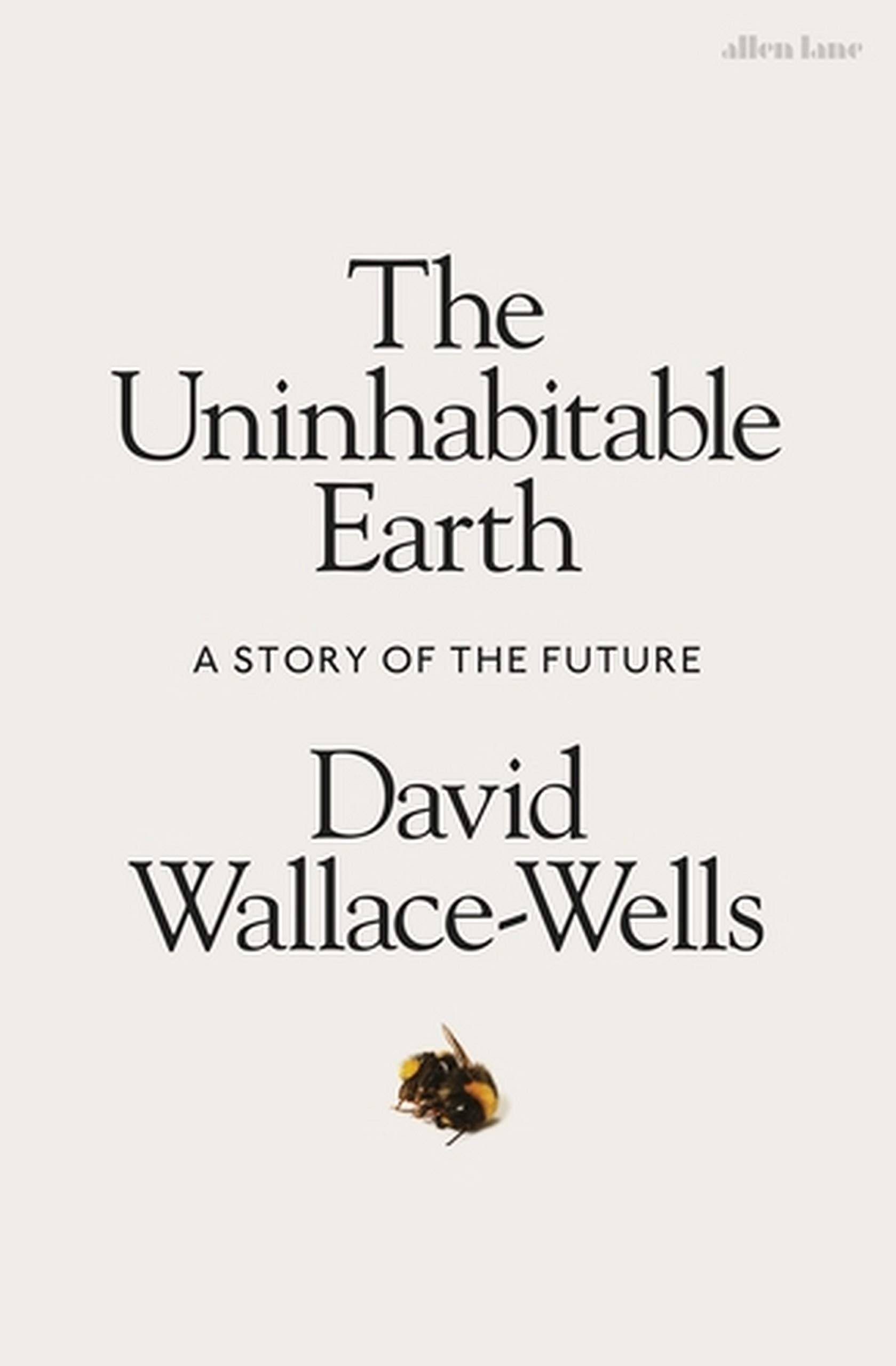 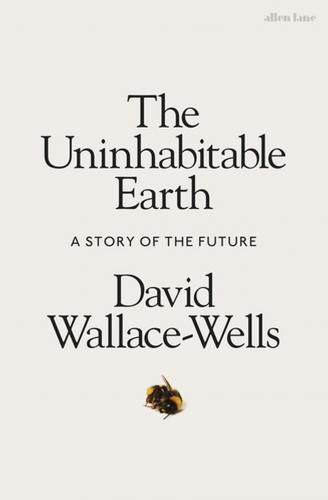 In the future, there may be recriminations. Scientists will say that politicians failed to manage the quantified risks of climate change, while politicians will claim that the scientists didn’t shout loudly enough.

Whether because of laziness, corruption or ignorance, the dry facts have failed to prompt anything like adequate implementation of technical solutions. Maybe the idea that carefully nuanced refinements to the science could directly lead to a winding up of the fossil fuel industry within 20 years skated over some necessary intermediate steps including a change of consciousness and mass political action.

Suddenly this gap is being filled by Extinction Rebellion, the school strikes for climate, and BirthStrike. ‘Our house is on fire,’ says Greta Thunberg in a simple metaphor, and: ‘once we start to act, hope is everywhere’.

Meanwhile in The Uninhabitable Earth, journalist David Wallace-Wells tries to give insight into the scale of the crisis and look at possible intellectual and emotional responses. ‘I am alarmed,’ he writes. It should be hard, after reading this book, not to accept that as a rational reaction. (Notwithstanding the psychologists who suggest that fear about climate change is counter-productive, and yet ‘worry’ is associated with support for action.)

What is the scale of the crisis? Will the earth become ‘uninhabitable’? One of the book’s strengths for me is that it presents the range of risk, from a best case of ‘25 Holocausts’ from fossil fuel pollution (under a ‘standard’ 2 °C scenario) to an implied worst case of extinction of most of the world’s species and destruction ‘more total than nuclear war’.

The most likely outcome is somewhere between these, but nothing is certain.

The author was clearly influenced by interviews with scientists including palaeontologist Peter Ward who specialises in mass extinction events and has warned of Bangladesh, Australia and equatorial regions becoming ‘uninhabitable’.

The next time someone asks me whether we are ‘screwed’ or similar language, rather than trying to explain how we cannot narrow the range of risk without knowing what action we will take, I may give them this book.

It might also be useful for disengaged friends and family to explain to them the need for political action, or be used to support a campaign for a local or national declaration of climate emergency (presumably more appropriate language to PN readers than a ‘war on emissions’).

Or it might simply be read to fill in the gaps for anyone who’s missed the last two years of climate coverage. However, like the current movements, the book is not hasty in prescribing solutions, and says little about them, describing carbon pricing and public investment as ‘obvious’ on the penultimate page.

The bulk of the book covers the impact of climate change on human beings, both now and in the future, with chapters on heatwaves, food and drought, floods and refugees, wildfires, ‘natural’ disasters, fresh water, oceans, air, disease, ‘economic collapse’, war and social and psychological effects.

Each chapter also mentions what the author calls ‘cascades’. These include the under-appreciated linkages between human causes of threats, as well as the possibilities for unexpected and accelerating harms. For example, food insecurity and disputes over resources intensify political instability and migration, while heat increases aggression and risk of armed conflict and pollution. And high carbon dioxide concentrations may directly impair cognition.

Combined with ‘feedbacks’ like methane release from permafrost and biodiversity loss, the impression is of complex vicious circles that may spiral out of humanity’s collective ability to manage. It’s grim indeed although, if you’ve been paying attention not necessarily ‘much worse... than you think’.

The author’s 2017 article, also called ‘The Uninhabitable Earth’, ‘went viral’, and was criticised by experts for ‘overstating some of the science’.

One critic, professor Michael Mann, now praises Wallace-Wells for ‘due diligence’ and appears in the book’s acknowledgements.

Rachel Carson’s Silent Spring (1962) shaped public consciousness of ecological issues without reference to global warming. This current book shares some of Carson’s vivid prose but lacks the scientific expertise. (Maybe we will see a transformative and evocative book by a specialist who can cover such a wide area. Dr Kate Marvel – a climate scientist at NASA’s Goddard Institute for Space Studies – comes to mind.)

Unfortunately, there are still some errors, so the book cannot be unconditionally recommended as reliable (although most of its own sources are).

For example, the author mischaracterises CCS (carbon capture and storage) as carbon-negative on the same page that he casually mentions an ‘American leadership on climate change [policy]’ that never existed (unless it’s referring to Costa Rica).

There’s also a careless implication that most refugees from Syria’s civil war came to Europe.

A particularly weak area is statistics, where the writing confuses annual figures with totals. One sentence does this while also confusing the mass of carbon with mass of carbon dioxide (to convert from the former to the latter, multiply by 11/3), while the next page misrepresents a paper on deforestation by confusing total and ‘additional’ warming.

Some dubious statements (such as a passing claim about why human noses are sensitive to hydrogen sulphide) are not referenced in the endnotes – which are mostly sourced from environmental journalism and scientific papers with a bias to publication in 2018.

I found these notes easy to use, although they are not themselves included in the somewhat incomplete index. In places, the language tends to purple prose (flesh that ‘simmers’) but on the whole it is both well-written and readable.

Perhaps the most significant problem is the common journalistic misrepresentation of the ‘Paris accords’.

Wells states that these set a maximum temperature rise of
2 °C (current ‘pledges’ would take us over 3 °C). In fact, the accord made a commitment to ‘well below’ 2 °C and to ‘pursue’ 1.5 °C.

The exact risks of higher temperatures are less predictable, yet the author uncritically repeats economic forecasts showing a
30 percent drop in global GDP at 4 °C. That’s a world that professor Kevin Anderson, of the Tyndall Centre for Climate Change Research, has described as ‘incompatible with an organised global community’ and in which GDP may not mean anything, even if it does now.

So is the book ‘alarmist’ in the dictionary sense of ‘overstated’ or ‘unnecessary’? I would say not.

Its overall impression is fair and, despite its sincerity and honesty, if anything it may actually understate some risks.

For instance, one 2017 paper that escaped the author, by Dan Rothman at MIT, suggests that we need to keep to the lowest-emission pathways to avoid a mass extinction; and James Hansen regards the Paris agreement as inadequate in terms of long-term sea-level rise.

Fortunately, I found the final third of the book much stronger. This looks at the cultural meanings of our climate crisis, and at attempts to contain it within existing worldviews such as those centred on technological and economic progress, the villainy of fossil-fuel corporations, or a retreat from civilisation. Climate change itself – or the action necessary to curtail it – is likely to upend each of these frameworks.

Wallace-Wells does a good job of transcending his own perspective as a New Yorker with a young child, and he also sees the work to be done. The latter will involve transforming every aspect of humanity’s infrastructure as well as at least some actions to tackle our world’s many injustices. Although we should attempt to confront climate change directly, it ‘is not a subject that can sustain only one narrative, one metaphor, one perspective, one mood.’

While warning against becoming selfish or inured to risks, and eschewing ‘doomsayers’ and despair, Wallace-Wells also pays attention to the deep ecologists of the so-called ‘Dark Mountain Project’ who have questioned the doctrine of ‘human exceptionalism’ (the view that human beings are the most important entities in the universe).

By considering the ways in which climate is not merely ‘an issue’ but instead something so huge and complex that it transcends human preconceptions – and which even the rich cannot protect themselves from forever – the author and reader are led towards ‘thinking like a planet’ as well as ‘thinking like a people’, and (finally) an ‘acceptance of responsibility.’

The future of life on Earth really is at stake.