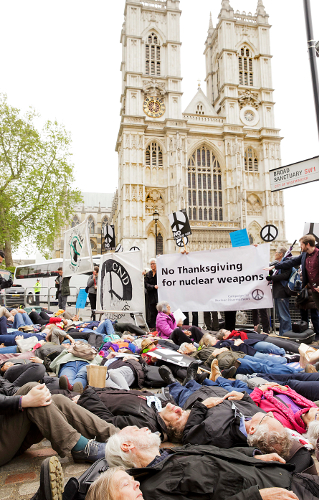 Little progress will be made on disarmament until we dismantle a basic myth about Britain's nuclear weapons, argues Milan Rai 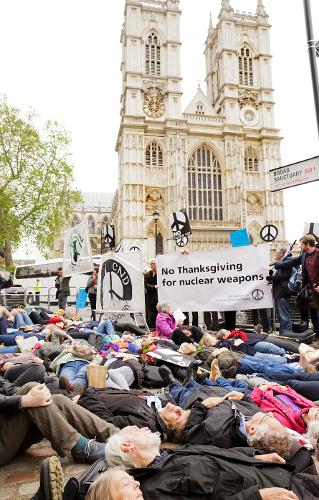 On 3 May, George Robertson, former Labour defence secretary and former secretary-general of NATO, was interviewed about Britain’s nuclear weapons on Radio 4’s Today programme (part of the time he was debating with CND’s Kate Hudson, who has an article on p9).

Robertson said: ‘They’re not there to be used. They’re there in the absolute last resort.’

Interviewer John Humphrys pointed out that ‘we’ve only got to use them once and – that’s it’.

Robertson replied: ‘But we don’t use them at all. That’s the main thing.’

He wasn’t challenged by Humphrys on these apparently obvious truths.

This is one of the basic propaganda devices of the media and the state in relation to British nuclear weapons. We don’t use them, so there’s no need to worry. They are only there to protect the country if an enemy with nuclear weapons was ever crazy enough to consider threatening the UK with a nuclear attack.

This picture of the world is a complete fantasy.

It is just not true that nuclear weapons have not been used since an atom bomb was dropped on Nagasaki on 9 August 1945.

Former Pentagon planner Daniel Ellsberg has told us repeatedly: ‘Again and again, generally in secret from the American public, U.S. nuclear weapons have been used.... in the precise way that a gun is used when you point it at someone’s head in a direct confrontation, whether or not the trigger is pulled.’

British nuclear weapons have also been used – in exactly the same way.

For example, Iraq has been threatened with British nuclear weapons on at least three occasions.

In 1961, Britain manufactured a crisis in the Persian Gulf to send the message (particularly to Iraq) that it intended to remain a power in the region. According to RAF historian Andrew Brookes, British strategic nuclear bombers were placed on alert in Malta as part of this operation. (Force V: The History of Britain’s Airborne Deterrent, p141)

“Nuclear weapons have been used – in the precise way that a gun is used when you point it at someone’s head in a confrontation, whether or not the trigger is pulled”

There was a flurry of British nuclear threats in the run-up to the 1991 Iraq war. To take just one example, on 30 September 1990, the Observer reported on its front page the warning of a senior British army officer with 7th Armoured Brigade that if there were Iraqi chemical attacks, British forces would ‘retaliate with battlefield nuclear forces’.

Before the 2003 attack on Iraq, there were many more nuclear threats. Here are some from then-defence secretary Geoff Hoon.

On 24 March, Hoon said on ITV’s Jonathan Dimbleby show that the government ‘reserved the right’ to use nuclear weapons if British troops were threatened by chemical or biological weapons.

In a commons debate on 29 April 2002, Hoon stated: ‘It is therefore important to point out that the government have nuclear weapons available to them, and that – in certain specified conditions to which I have referred – we would be prepared to use them.’ (Hansard, col 666)

Hoon refused to clarify what the ‘specified conditions’ might be.

Other countries have also been subjected to British nuclear bullying. For example, British strategic nuclear bombers were sent out to Singapore in December 1963 during the war (‘Confrontation’) with Indonesia. RAF historian Andrew Brookes writes that the V-bombers were kept in Singapore longer than usual, ‘positioned to be seen as ready to eliminate Indonesia Air Force capabilities if they launched air attacks’. (Force V, p138)

It should not be possible for a politician to say that British nuclear weapons ‘are not there to be used’ and ‘we don’t use them at all’, without being sharply challenged in the British media. They have been used, repeatedly, in attempts to shape the behaviour of opponents.

The Robertson interview was taking place because of an event that day. In April, it was the 50th anniversary of Britain’s ‘continuous at-sea deterrent’ (CASD), and this was being celebrated by the navy in a church service at Westminster Abbey on 3 May (see pic). CASD means the round-the-clock, seven-days-a-week deployment at sea of a British submarine capable of firing long-range missiles with nuclear warheads.

The media reaction to the anniversary was pretty muted. The Guardian passed over the anniversary in silence in its paper edition (apart from a Steve Bell satirical cartoon) – leading to a flurry of readers’ letters a few days later.

The Telegraph and the Financial Times each had a single news report on the subject, one focused on submariners’ lives, the other on Scottish politics. The Independent carried a fine opinion piece by our very own Bruce Kent and a related walking column (!) by Will Gore.

The fullest coverage of the anniversary was provided by The Times, which had a story on 5 April (‘Row over nuclear weapons “celebration” at Westminster Abbey’) as well as an editorial on the day of the service.

The editorial stuck to the standard line. Nuclear missiles submarines are ‘Britain’s last line of defence’: ‘An independent deterrent is there to ensure that an aggressor cannot escalate a crisis beyond Britain’s ability to respond.’

“If there were Iraqi chemical attacks, British forces would retaliate with battlefield nuclear forces”

Setting aside the statistical anomaly of Bruce Kent’s piece, there was nothing in the coverage that broke with the ideas that British nuclear weapons ‘are not there to be used’ and ‘we don’t use them at all’. Until these myths are rooted out, it may be difficult to make progress on British nuclear disarmament.

Noam Chomsky once argued that: ‘For those who stubbornly seek freedom, there can be no more urgent task than to come to understand the mechanisms and practices of indoctrination.’ In other words, one of the main obstacles stopping us getting to a better world is the distorted picture of what’s going on created by the mainstream media and mainstream academia.

The most basic principles of state propaganda, in Britain and elsewhere, are that (1) the state is Good, and (2) every action the state takes is defensive.

Therefore, British nuclear policy must be defensive – whatever the facts may be.

The British media, despite being free from state control, conforms to these ideas in its reporting and its commentary (with a tiny number of exceptions). It drives home these basic ideas by not remembering uncomfortable facts that it once reported.

This produces what Chomsky and his co-author Edward Herman call ‘brainwashing under freedom’.