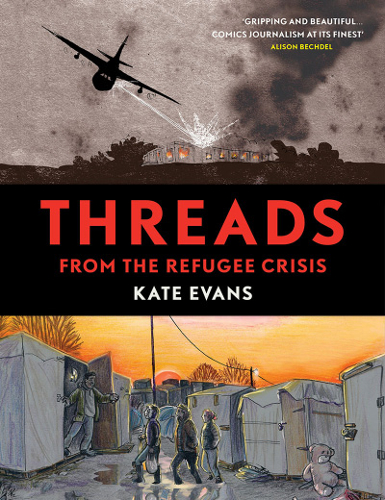 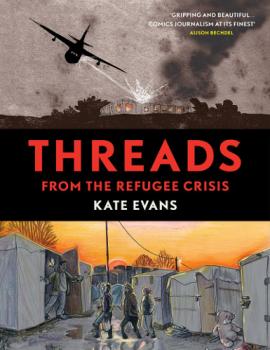 Kate Evans has created beautiful, radical comic strips since the 1990s. She has drawn and written about her experience as a tree protester at the Newbury Bypass, climate change, pregnancy and breastfeeding and the life of Rosa Luxemburg.

Threads came about as the result of a trip to volunteer at the Jungle refugee camp in Calais in October 2015, followed by two further trips in January and February 2016. The graphic novel documents Evans’ experiences in the camp, and the friendships that she made with the people living and volunteering there.

Her drawings convey the Jungle in a way which could never be captured by news clips and reportage. Drawing is a slow and reflective process, and while Evans’ pages convey the misery of mud and people barely surviving in the chaos of temporary shelter, she also pulls out the threads of humanity and weaves them into a powerful testament to the 5,000-plus inhabitants who are so homeless that they don’t even have a country anymore.

On her first visit to the Jungle, Evans works by building shelters despite a shortage of tools. On her subsequent trips, she works as an artist, drawing portraits of the people she meets: ‘What can I give someone who has very little and is about to lose even that? I can give them a piece of paper with their portrait on.’ Painting a portrait is a powerful action. It is an opportunity to communicate in a very intimate way. Eyes meet and a connection is made which will last a lifetime.

Alongside her own ‘woolly liberal sentiments’, Evans also reproduces some of the critical messages that she received on her mobile phone: ‘This cartoon could not be better propaganda for battlefield veteran Islamic militant males invading Northern Europe if Lenin himself produced it.’ It’s a great narrative device – technology as a hostile chorus – which she can then, in turn, respond to.

While Evans was drawing this graphic novel, she must have known that by the time it was published, the Jungle would be no more. But that doesn’t make this book dated or worthless. Refugee camps will be closed down – just to be rebuilt elsewhere. Sadly, Threads is still a contemporary statement, and one that we can learn from.

As an appendix to the graphic novel, I recommend watching a short film where Evans draws and talks about the making of the book: www.tinyurl.com/ybb2juvv