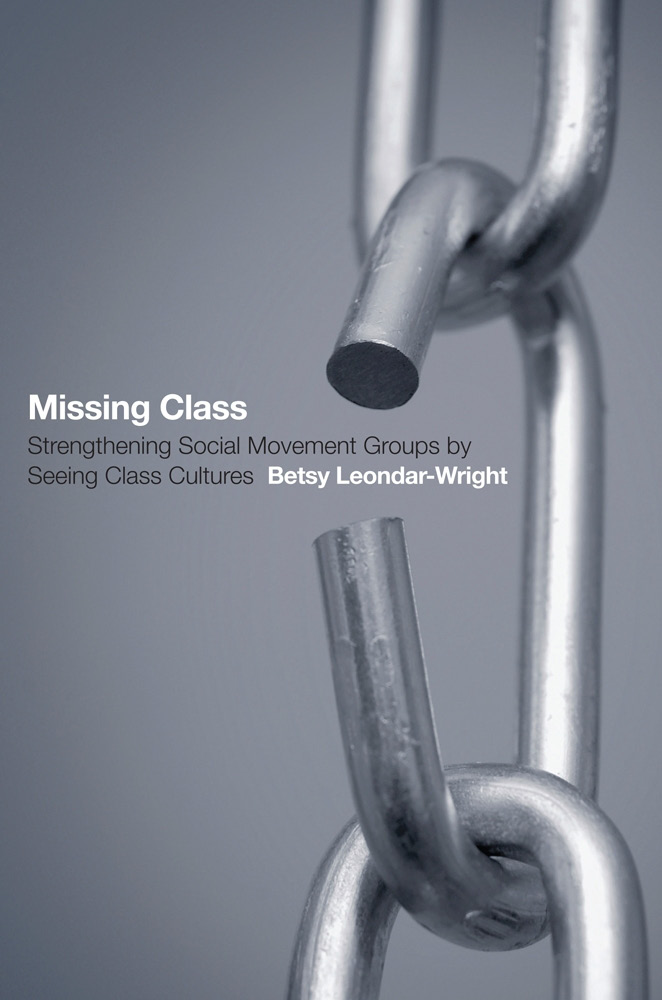 I cannot recommend Missing Class too highly. Studying this book – and acting on its insights – will make our movements stronger.

Some books stimulate you intellectually – you end up seeing the world a different way. Some books deepen awareness – you finish them with a greater understanding of yourself, and of the web of relationships that you are part of. Some books are practical; full of immediately-useable how-to tips.

Betsy Leondar-Wright’s Missing Class: How Seeing Class Cultures Can Strengthen Social Movement Groups is a huge act of generosity to Western activist movements – I think to social movements throughout the world.

I loved her previous book, Class Matters: cross-class alliance building for middle class activists. In part of that book, Leondar-Wright claimed that our class backgrounds, and the class cultures we unconsciously carry, affect how we operate in social change groups.

Challenged during her book tour to back up these anecdotal claims, Leondar-Wright realised she lacked hard evidence, which is a common phenomenon for people advocating large-scale social change.

She then decided to spend several years gathering the hard evidence to test her ideas. Not such a common phenomenon.

She carried out a rigorous, supervised postgraduate sociological investigation, generating nearly 100 transcripts of meetings and interviews with members of 25 ‘left-of-center groups’ in five US states.

Almost everyone who went to the meetings she studied filled out a survey afterwards (she offered chocolate as an incentive for filled-in surveys). This generated information about participants’ class backgrounds among other things.

Time and again, Leondar-Wright found statistically-significant class differences in the way that people acted in meetings, across gender and race, and across different movement traditions.

Betsy Leondar-Wright begins with a wonderful story about different ways of speaking. Missing Class is very readable, very accessible, full of very human stories of people struggling with each other, supporting each other.

An urban coalition of unions and their allies has brought in an outside facilitator, Zoe, a college-educated white woman from a professional-middle-class (PMC) background. (All names have been changed in the book.)

Zoe opens with a long statement which doesn’t mention any particular action, person, organisation, time or place, but which has many abstract words and phrases such as ‘participation in mobilisation’ and ‘strategic planning’.

She breaks the meeting up into small groups to ‘put these recommendations into the context of these benchmarks’.

Almost none of the groups does as it’s been asked.

At the end of the meeting, Zoe describes the outcome as ‘unclear’, and two university-educated coalition leaders say it hasn’t helped them to prioritise ways to build the organisation.

Despite the communication problems, union members generally feel supportive of Zoe and the college-educated union leaders. Leondar-Wright comments: ‘This was not a story of cross-class conflict or hostility, but of class sub-groups operating from two different playbooks and thus accomplishing less.’

Missing Class is a treasure trove of practical tips for dealing with common activist concerns, including how to recruit and retain members; how to activate inactive members; how to work against oppression inside our groups; and how to deal with ‘people who talk too much in meetings’.

On recruiting members, Leondar-Wright found that working-class people tended to recruit people they knew (including their relatives), on the basis of the personal impact of the issue, using short-term incentives (food at meetings, practical mutual aid between members, training that could lead to promotion).

PMC people tended to recruit on the basis of ideas; none mentioned the personal impact of the issue on them in her follow-up interviews; they rarely gave each other practical assistance in their personal lives; and they usually lived far away from their relatives.

Leondar-Wright suggests that if we want to build powerful, large groups to make social change, they will need to be cross-class groups that use a mix of attractions to recruit and retain members.

There are similarly practical thoughts on a range of organising issues – I especially liked the section on diversity training.

There are definitely particularities about the US experience of class, but I’m sure there is a lot of value here for folk in other Western societies, and even for social change groups in the Global South, where the culture gap between activists from PMC and working-class or poor backgrounds is usually much greater.

I should also say that a large part of the book is devoted to the class culture of Voluntarily-Downwardly-Mobile (VDM) folk (generally anarchists). Very interesting, very perceptive, and with some very helpful insights and suggestions.

Leondar-Wright’s personal account of the failure of consensus decision-making in the Movement for a New Society (see PN 2545 for relevant interview and review) is also not to be missed.

You will be hearing a lot more about this book – in Peace News if nowhere else!

Milan Rai is a PN co-editor.