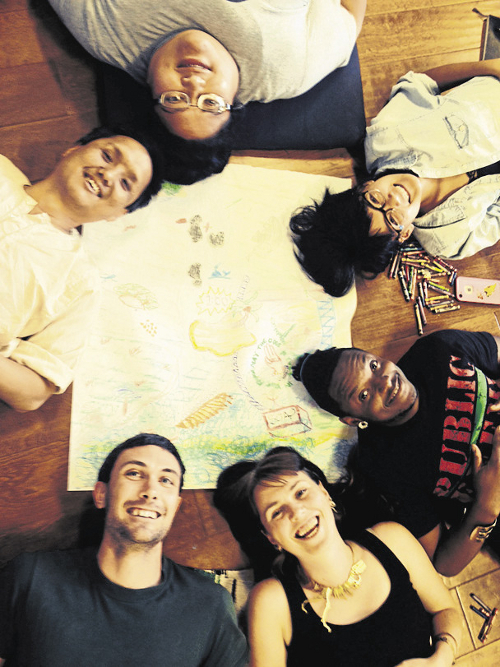 Why travel thousands of miles (chucking over a tonne of carbon into the atmosphere) to a strange city on a different continent to spend three weeks with people you’ve mostly never met in order to learn about facilitation and training?

There are plenty of facilitators and trainers in Britain to learn from – plenty of activist trainers. There are a lot of books available about different approaches to facilitation and training.

Training for Change have loads of material on their website that you can download for free (and that I’ve used or seen used before going on the Super-T).

What’s so special about Training for Change (TfC) and its four-part ‘Super-T’ course?

I will have a go at explaining, but I should start by saying that, to me, the Super-T was an incredibly valuable experience that I know is going to benefit my social change work in dozens of ways. I’m sure the carbon cost was worth it, though I know folks who would disagree. It was definitely worth every penny it cost me (£512 air fare, £596 registration on the sliding scale).

In my case, I’d already attended two of the four workshops before, in Margate in January 2013 (see PN 2555). Why do them again? Well, for me, repeating those workshops was a very rich experience. The Super-T was a unique experience.

"I was awestruck by the self-exploration and self-revelation and personal change that happened for many people."

That sums up a lot of the Super-T. We experimented with new behaviour, we faced up to restrictive ideas we had about ourselves, and we were supported by experienced and skilled trainers who modelled the risk-taking that they were encouraging in us.

A lot of the value of the training came from the wonderfulness and diversity of the two dozen or so people who took part in the course, from all over the world. This year, the group happened to be overwhelmingly women of colour, with only three non-trans men and half a dozen white people. Around half the group, including me, had Asian heritage.

Online, you can find a video of graduates of previous Super-Ts saying what the course has meant to them. Here are quotes from two women of colour.

Naomi went on to say that the Super-T ‘probably is the single most learning moment for me in my life as a trainer, because there was a safe space for me to really step out and learn and grow – and do it in front of other people.’

All that is true.

George Lakey, founder of TfC, writes in Facilitating Group Learning (a wonderful book) that transformational work is not the same as group therapy: it is not about healing or insight, but it is based on the aims of the workshop. Transformational work aims to loosen up people’s internalised blocks to learning and to functioning effectively in groups working for social change.

Having noted George’s words, I must say I saw plenty of insight and quite a bit of healing for folks at the Super-T.

George adds: ‘To make actual transformation, rather than simply a sentimental moment to remember at the end of a workshop, participants need assistance in changing their belief about themselves and even a revised cognitive framework, or worldview. Nor is this enough. Consistently changed behaviour requires confidence, and confidence comes from practice’, especially in ‘real life’ after the workshop.

Three weeks after going through a bunch of transformational moments myself during the Super-T, generally outside workshop time, I’m seeing the truth of these words.

The overwhelming bulk of what we did in the four workshops was about skill-building and practice groups (plus some theory) within the context of an invitation to experiment with new ways of behaving, new ways of doing things.

The point of TfC workshops is to help you, the participant, take your next step as a facilitator or trainer. The nature of that next step depends on your situation and your goals.

Every minute of the Super-T was packed full of incident and new stuff; each hour felt short as well as enormously long.

By the end of the Super-T, it felt like centuries had passed in West Philadelphia, while back at home it was just 19 days.

Given the immensity of the experience, the words on this page feel like the drawing of a breath, before I start to tell you what happened at the Super-T.

Milan Rai is a PN co-editor. His first TfC training was the George Lakey workshop in Manchester in July 2012, organised by Peace News. During the Super-T, Mil was the guest of the very wonderful Jennine Miller and Kris Eden. The TfC trainers at the Super-T this year were Betsy Raasch-Gilman, Ariel Bowering, Daniel Hunter, Nico Amador, Celia Kutz, Erika Thorne and Matthew Armstead.

Going to the source