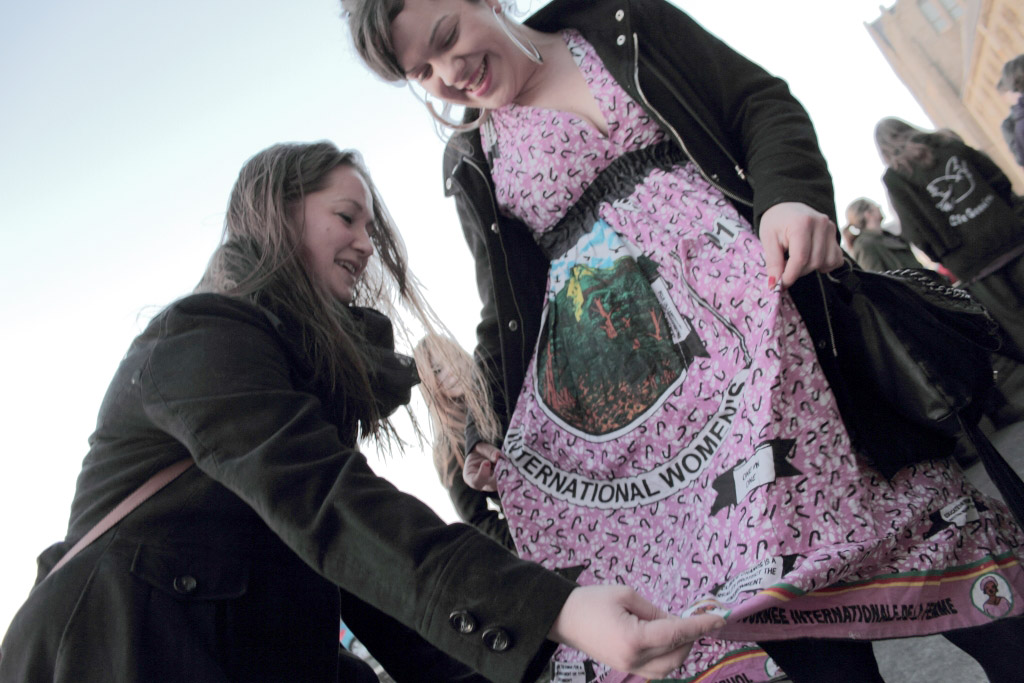 International Women’s Day Eve, 7 March 2014: an ominous crowd, women dressed overwhelmingly in black, gathers behind the Old College of Aberystwyth overlooking the sea and the setting sun. Such a gathering has never taken place here before: these women plan to Reclaim the Night.

Reclaim the Night marches are a tried-and-tested way of building solidarity and sisterhood. There is something oddly exhilarating about loudly, proudly, self-consciously refusing male accompaniment for a twilight walk. And the fact that it is so exhilarating, so nerve-wracking, still so damn controversial, makes you damn glad you’re doing it with your sisters.

Sisterhood is at the core of feminism for me, which is weird because I often prefer to call feminism ‘women’s liberation’ to avoid co-option by the ‘what about te menz?’ brigade. But I think we’re liberated by coming together. Which is why I made ‘unity without uniformity’ the theme of my little opening speech at the open mic we held after our march and the silent vigil in which it culminated.

When it came to raising our voices and speaking out against sexism, it was important to me, anyway, that we should recognise our differences. Hence I was glad to have a drag act, a jazz singer in her 20s, and a choir with a median age of around 50 singing about the plight of refugee women, the battles of women of colour and the class struggle.

In the context in which we were gathered, singing about class struggle was particularly poignant: in Aberystwyth, a small town, at least 19 staff have been recently made redundant from female-dominated sectors in the university.

Alongside consciousness, we were also raising money for Women’s Aid, a charity whose services are more direly needed than ever now as women’s unemployment stands at its highest in 25 years and the safety net of the welfare state is ‘reformed’ out of existence, leaving countless women dependent on the abusive partners who kill two of us every week in England and Wales alone.

Women are living under a siege of male violence, and indifference to class, to age, to sexuality, to race, to disability among us leaves those most exposed without a lifeline. We must start finding strength in our differences and come together not despite them but through them. What we learned on the eve of International Women’s Day this year, was that though this is poignant and moving and difficult, it can also be fun and we plan to do it again next year, if not before!