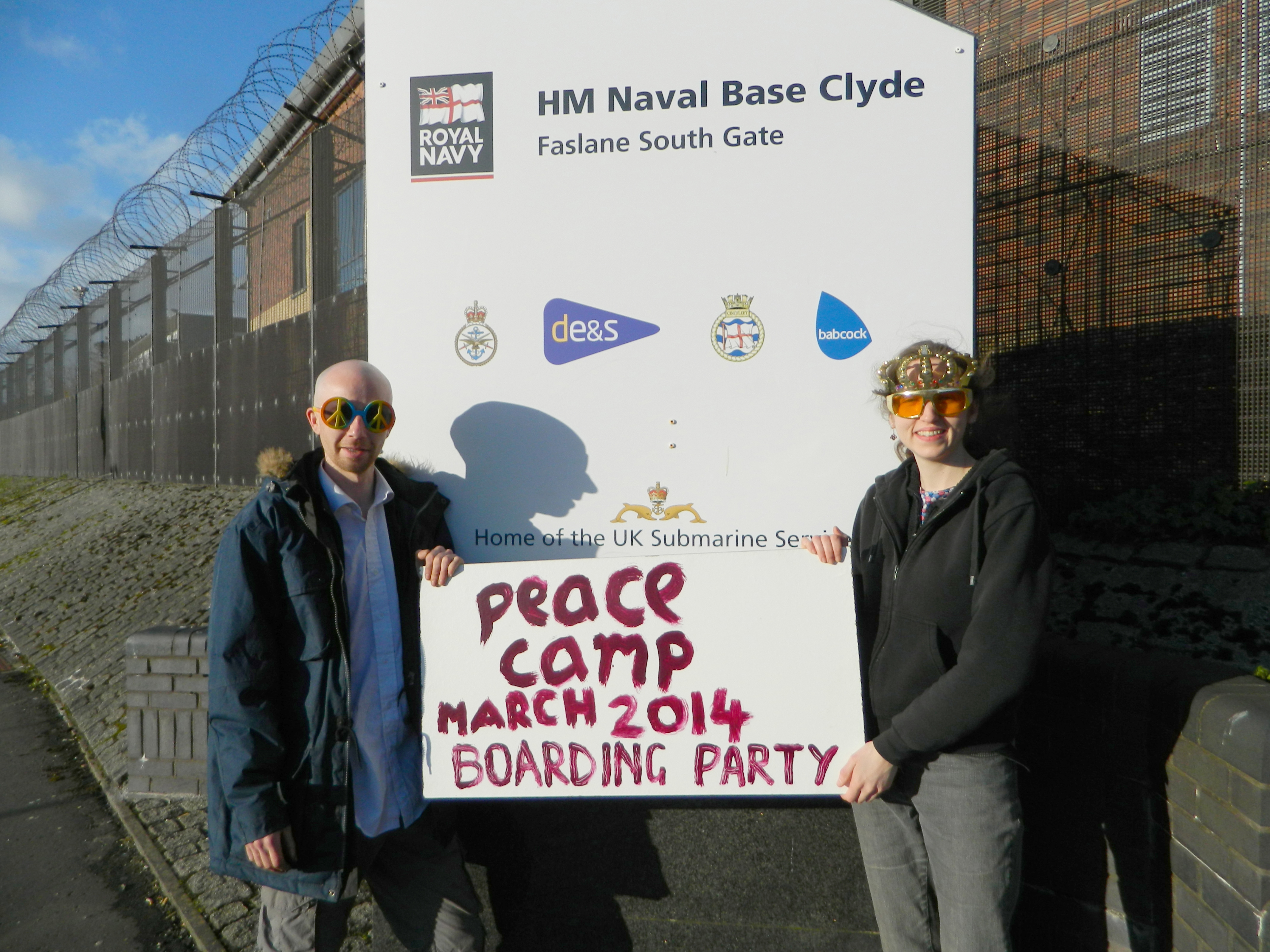 Action against weapons of mass destruction

Contrary to popular report (even among some peace activists), Faslane Peace Camp is still here and still opposing weapons of mass destruction, war and militarism. Things have been a little quiet over the winter but now spring is here and we’re ready for action.

Early on 19 March, I was arrested on board HMS Ambush inside Faslane naval base (which houses Britain’s Trident nucler missile submarines) along with fellow peace camper Jamie Watson.

We’d set off a couple of hours previously with a ladder, carpet and boltcutters and no expectation of getting further than the outer fence. I’m still amazed we got as far as we did.

Nobody had got inside the base for months, so our action was long overdue. That night the conditions were right so we decided to go for it. After a long, muddy walk we reached the appointed spot and rather gracelessly climbed over the razor-wire-topped fence – with the help of the ladder and boltcutters. The carpet helped us surmount the three coils of razor wire inside.

Perhaps thanks to some kind of commotion at the other end of the base we didn’t encounter any police at all, even though the whole process took much longer than it could have.

Being natural pessimists, we hadn’t spent very long at all considering this eventuality. It seemed logical to head downhill towards the most interesting part of the base.

We somehow found the pedestrian entrance to the submarine docks without seeing anyone. Unfortunately the turnstiles were locked. The guard on one side didn’t even wake up and the second asked for my pass but apparently didn’t raise the alarm when I patted my pockets and walked away.

Thinking they might be onto us, we headed for an open gate. The guard saw us but all we had to do was keep walking, and we were halfway along the Astute jetty before the bandit alarm sounded. Five minutes later, we were finally arrested on the deck of the submarine, having had time to ring the bell, watch the police boat arrive and wonder how it had all happened.

We were charged with malicious mischief, by-laws offences and offences under the Serious Organised Crime and Police Act. We were held for court but eventually released without appearing after nearly 33 hours in custody.

We’re now almost hoping we’ll be prosecuted so we can cause as much embarrassment as possible to the MoD.

HMS Ambush is one of the new Astute class of hunter-killer submarines. It has the same type of reactor as the Trident prototype reactor in Dounreay, where the MoD recently covered up a radiation leak for two years. Five more Astute subs are planned for Faslane, which will result in more radioactive waste being discharged into the Clyde.

This is a really interesting time to be involved with Faslane Peace Camp, with the referendum on Scottish independence coming up in September. A ‘yes’ vote probably represents our best chance of seeing Trident leave Faslane, while if Scotland votes ‘no’ we’ll get a £100 billion Trident replacement and five more Astute submarines.

We’re hoping this will be the first of many direct actions over the spring and summer to keep nuclear weapons on the agenda.