The biomass chain of destruction 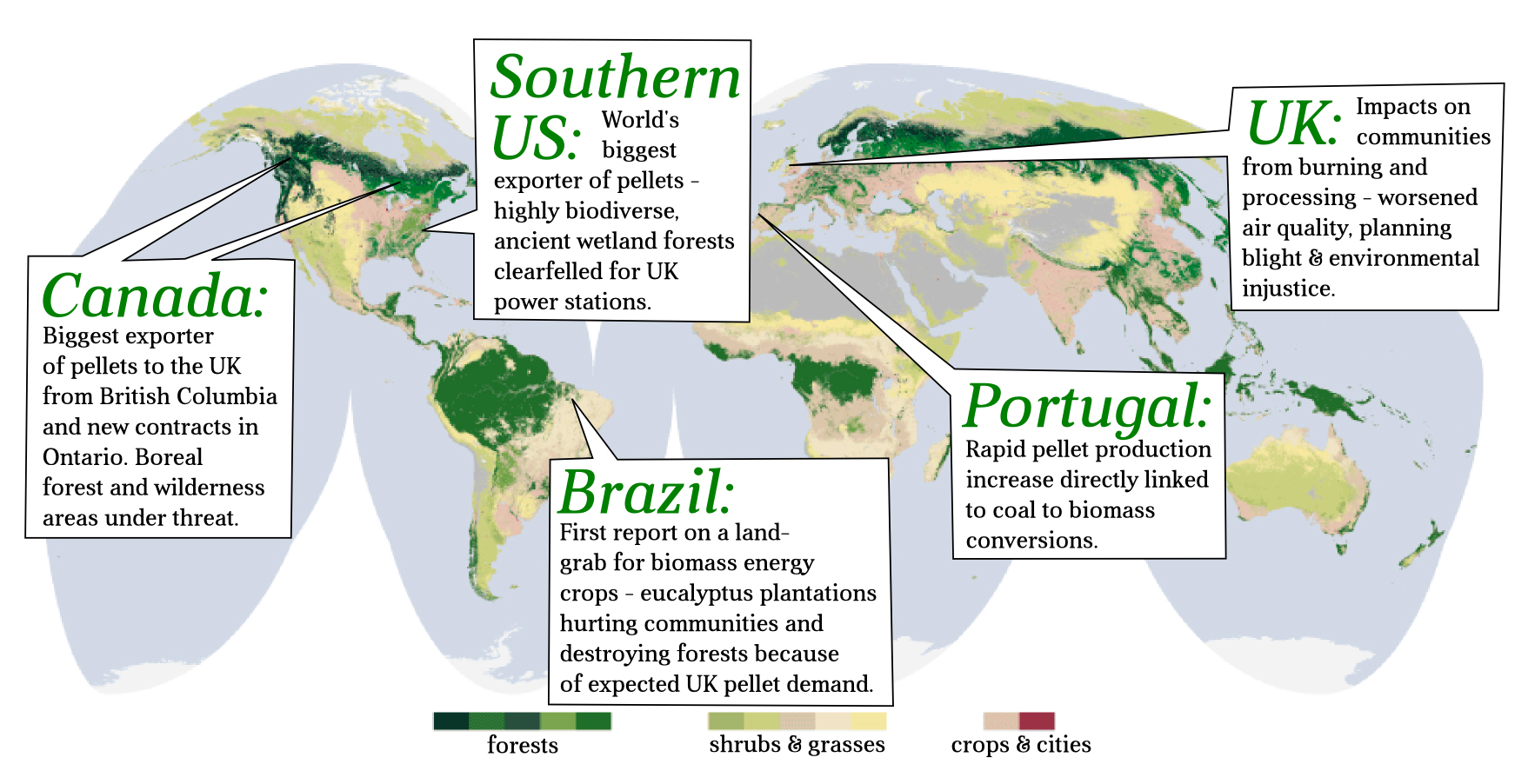 Demand for biomass is sky-rocketing in the UK. Burning wood for large-scale electricity generation is a key element of the UK government’s renewable energy policy and 42 new biomass power stations have already been proposed. Energy companies have announced that they intend to burn 68.9 million tonnes of wood a year in these power stations. This works out to eight times the UK’s total annual wood production. The UK government by its own admission estimates it will have to import at least 80 percent of the biomass burned in the UK by 2020.

While classified as an eligible source of renewable energy, biomass is far from the sustainable solution that it is claimed to be, particularly at this industrial scale.

A recent report by Biofuelwatch, Biomass: The Chain of Destruction, highlights new evidence that the UK’s growing demand for biomass is causing the logging of wildlife-rich forests around the world, as well as the planting of monoculture tree plantations at the expense of native forests and the people who depend on them.

Then, when the biomass is finally burnt in power stations in the UK, harmful pollutants are emitted which have serious health impacts on surrounding communities.

In the Brazilian state of Maranhão, one of Brazil’s largest pulp and paper companies, Suzano Papel e Celulose, is taking land from traditional communities and replacing them with eucalyptus plantations for wood pellet production, in reaction to anticipated demand for biomass from the UK. Rich forest vegetation, home to countless plant and animal species, is being bulldozed and communities are experiencing the loss of their livelihoods, land and traditional way of living as a result.

At present, virtually all wood imported for bioenergy (burned in coal power stations, primarily Drax in Yorkshire) comes from Canada and the southern US. The southern US wetland forests are the last refuge for large numbers of species. Indeed, they are one of the most biodiverse freshwater ecosystems in the world. These forests are now being clear-cut to make pellets, including for Drax.

The most serious local impacts of biomass electricity are those on air quality and public health, resulting from the emissions released when biomass is burnt in power stations. Although waste wood (much of it chemically treated) is widely seen as a particularly ‘sustainable’ source of biomass electricity, burning it results in particularly high levels of toxic air emissions. And it is not just residents living close to power stations who are affected but also those living close to wood recycling plants, which increasingly supply energy companies with woodchips.

The Biofuelwatch report contains a series of testimonies from community activists, which illustrate the lack of any effective regulation, planning policies and mechanisms which would protect public health from dangerous and harmful levels of pollution.

There is a substantial amount of research which shows that these polluting industries often have a disproportionate impact on more deprived communities.

The evidence shows that not only is large-scale biomass electricity not environmentally sustainable, but it also has very serious impacts on the quality of life of people around the world.

As a result, it is imperative that biomass is no longer seen as the solution to our urgent need to stop using fossil fuels. Instead, a major shift in energy policy is needed – one that moves us away from large-scale combustion, be it of fossil fuels or biomass, towards genuinely sustainable renewable energy. Crucially, we also need to bring about much lower levels of energy consumption in the UK. Only this will prevent the impacts described here from escalating.

Sophie Bastable is a campaigner at Biofuelwatch.