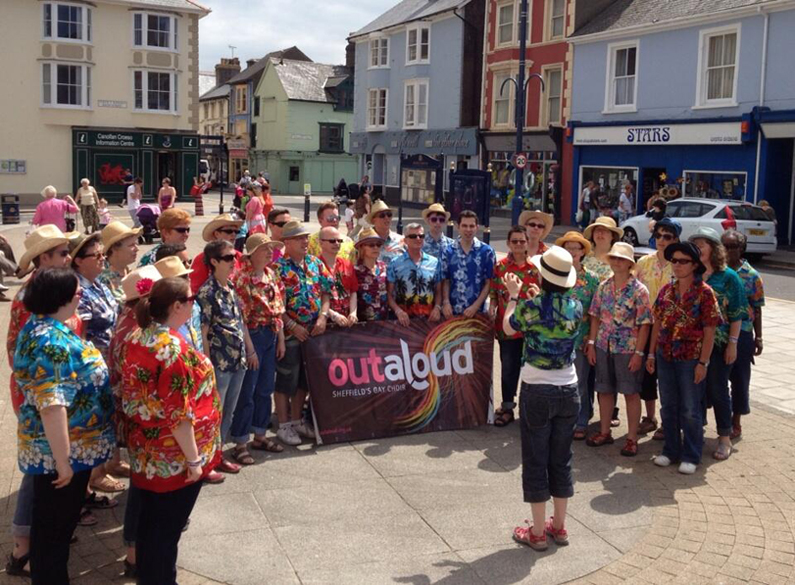 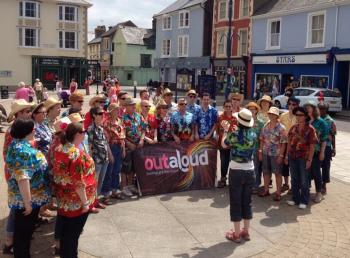 A radical initiative with great potential, the Campaign Choirs network, was formed during the July 2013 Street Choirs Festival in Aberystwyth. Participants agreed that ‘the political urgency of our times means we want to alert each other to events, demonstrations, etc, and share our songs more often and more widely’.

Since then, Campaign Choirs network’s shared actions have included local and national events, such as the ‘Tell the Tory conference’ national march and rally, the Liverpool ‘celebrating, not dividing’ national demo against fascism, the ‘People’s Assembly against Austerity’ day of action, ‘Sing Trident Out’ in Basingstoke, the Aberporth anti-drone protest, the ‘Belt it out at Balcombe’ anti-fracking demonstration and many more – and with much more action to come this year.

Continuing the fracking theme, adding to the efforts of Frack-Free Wales and the many local groups opposing the exploitation of extreme energy in Wales, Friends of the Earth (FoE) Cymru are launching their own anti-fracking campaign. FoE want singing to play a part, inviting all regions to contribute with appropriately-adapted songs for a Wales-wide day of action provisionally scheduled for 5 July: Welsh Energy Independence day!

September’s NATO summit in Newport is a likely stage setting for Camilla Cantantata’s Trident Oratorio, and Aldermaston and Burghfield are tried-and-tested locations for anti-Trident song demonstrations and tea parties, with a big ‘Sing Trident Out’ blockade being planned for October.

Creative protest involving song is a powerful and joyful way to bring issues to the fore and the Trident crime reporting in Reading on 8 February (see opposite) was a good example.

The revolution will be musical!