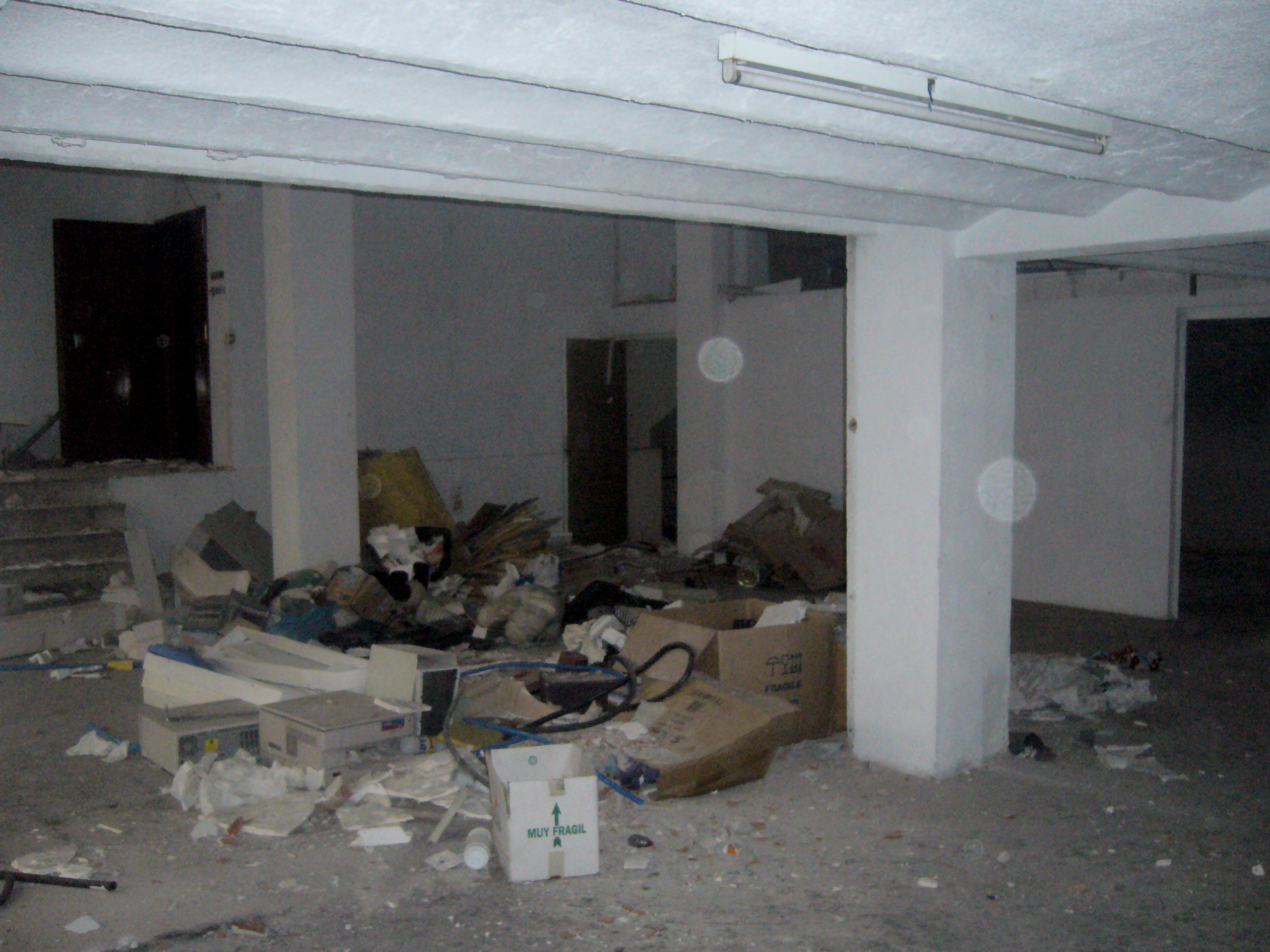 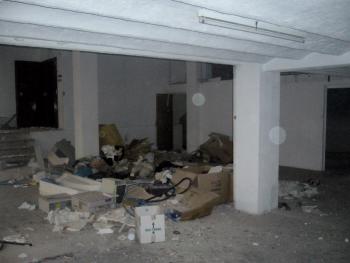 The social centre before it was occupied.
Photo © Enredadera Tetuán

On 3 February, the PN co-editors interviewed a key figure in the Centro Social Okupado la Enredadera (the Vine occupied social centre) in northern Madrid. The social centre is one small part of the huge, nonviolent, anti-austerity, non-hierarchical ‘15M’ movement which began in May 2011, and has shaken up Spanish politics and empowered millions of people.

Peace News What was the beginning of the social centre?

Rodrigo In this neighbourhood, there used to be a lot of people of different cultures and it wasn’t easy for us to mix [with] each other, to know neighbours. So we were friends who started to make things in the street, in 2007-2008: some kinds of action, games, markets, organised by the people, not by the city – by the people at the bottom.

I think 15M shook everything – even for the punks and for the anarchists.

And when the cold weather started to come, we thought of squatting a place to have ‘the street with a ceiling’ and we squatted this place in January 2009. We had a very cool experience mixing with a lot of people coming from Latin America or North Africa.

Our neighbour, the mosque, is kind of near [the Madrid Central Mosque is just across the alley, Calle de Anastasio Herrero] and in this period of time, maybe nine months, we felt strong to make things by ourselves. Then we were evicted.

But then we made an agreement with the owner. At the end of 2010, we started to live here, to work here, with permission.

The owners don’t know what to do with this building, it’s industrial, so there’s no possibility of making apartments, but no company wants to make industry here because it’s inside the city.

So, finally, we got a place here to work, and to know people and to make some chats, or video, or play music.... It’s centred on making stuff or [getting] to know each other. Some of the activities we make here are more evidently working on some change in society, and some of them are just possibilities of getting people to know each other. These two ways are really the same for us.

PN Do you have to pay rent to the owner?

R Not now. We got the compromise that when he finds some buyer, we have to go, but [there are no] possibilities [of that] in this moment of crisis: he is asking millions of euros! So it assures us a lot of time to work here. What is cool is, normally, you are evicted in nine months, 10 months, one year, [and] you don’t have time enough to work with people.

PN How is it run, how is it managed, this space?

R We got one meeting a week. There are some workshops which are more or less weekly and some other proposals, it depends on what people want.

For example, yesterday there was a meeting about transsexual people fighting for their rights. That is very new for us, because we don’t really know much about this struggle. So this is once [a one-off], maybe, [or] maybe we’re going to keep in touch. I’d like to.

We’ve got some activities that are every week. For example, the group of people fighting against mortgages [and evictions] and people fighting for housing rights: every Wednesday they got a place here. And it’s the meeting of this neighbourhood. But sometimes there are some housing meetings of all different neighbourhoods coming here.

And we’ve got some people playing music here. Action samba, rhythms of resistance. We’ve got a bike workshop to help people to fix their bikes, so we don’t need cars all the time. This is more or less weekly.

But it’s not like we’ve got a schedule full of stuff every week. Sometimes we’re flexible to have new things, mostly in weekends.

PN You said in the beginning there was quite a lot of involvement of North African people, and people from the mosque. Is that still true?

R It’s not like the beginning, I guess, but there are some good friends of this first moment that are still in touch. What is, is not as beautiful as we would like, but it’s beautiful that it’s a chance to have like a meeting, and it is beautiful we are able to say we have got five, 10 guys coming here not every day but every week to visit us, to make things together.

And so with people from Latin America, some of them are pretty involved in housing stuff. Every Wednesday. At the beginning, they started to come [because] they were affected by the problem, and some of them, they don’t have a problem now because they solved it, but they keep coming here because [PN: of solidarity?] Yes. That’s beautiful.

PN In your weekly general meeting, do you use majority voting or consensus?

R Normally we prefer... I prefer not to vote. Mostly, when we are small groups, we don’t find that it’s necessary, because we are partners. Maybe in very, very, very big groups it’s necessary [to vote], but we are not a very, very, very big group, we are a neighbourhood. The weekly meeting is 10-12 people. (But there are a lot of [other] people that are involved in many different assemblies and groups in the neighbourhood and outside.)

We can find a way to make a decision we are all happy with it. And we can say: ‘Okay, let’s try this, it’s not exactly what I want but it’s not the opposite of what I want. Let’s try.’

PN Had you been involved in setting up social spaces before?

R I used to be involved in anarchist, punk rock social centres in Madrid. And this is still, to me, cool. I can learn a lot in those spaces, but I really enjoy feeling part of a neighbourhood. Not just a music or an ideology of young people.

I’m happy to be able to be in those spaces because I am welcome there, but I love to be here, in spaces that are not just for me and my friends. It is working for something, making like a ‘glue’ with different parts of the neighbourhood.

Nowadays, it’s my tendency, my passion.

PN Are the punk social centres as strong as they were, or are people gravitating more to neighbourhood organising?

R I think 15M have shaken these spaces as well. There are a lot of squats, older squats, that are now working with [any] people who need a house, not just punks. So this is a little triumph. It’s not just a little group of, do you say: ‘social tribes’? We use this phrase in Spanish. It’s not just squats for social tribes.

Somehow, in some way or other, they are working with the neighbourhood, and their communities. For example, in the south [of Madrid], the same people who were squatting spaces just for self-consumption, now they are open-minded. They’re still working on some kind of revolution, but with the rest of the neighbourhood.

I think 15M shook everything – even for the punks and for the anarchists.

Some of them are [still] pretty centred on their music, but I think it’s not very common. They try to know or to be in touch with the other struggles of people that are fighting for the rights of, I don’t know, immigrant people or healthcare.

It’s impossible to be in a social centre which wants to be in the way of revolution and not to stay in touch with what is happening now.

Sometimes, you can agree more or less – in my case, I agree with everything that is coming from the bottom, from the base, from [the] community. [People who] are, I don’t know, centred in some ‘pure’ anarchism, even if you are thinking in that way, you have to be in touch with what is happening now. So this is so important.

To me, it is beautiful. Because even ‘super-anarchist’ people, thinking on their books and their music, even those people are in touch with what is happening now.

If you are in the way of revolution, or wanting to do something, you have to stay connected.

The biomass chain of destruction