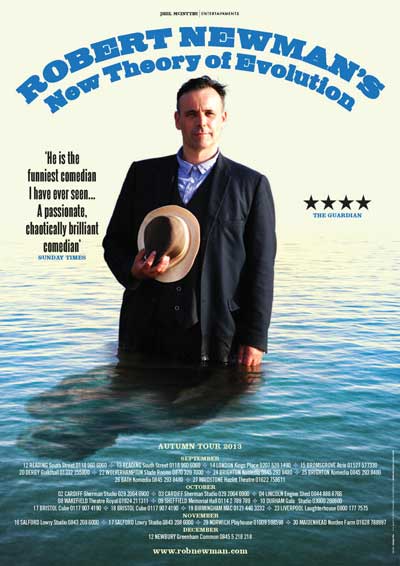 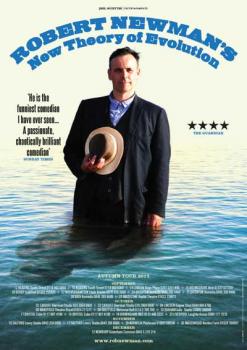 Rob Newman’s latest show – his first full-length tour since 2005 – is, as might be expected, a strange mix: a full frontal assault on ‘ultradarwinism’ (the gene- and natural selection-centred account of evolution popularly associated with Richard Dawkins) refracted through the prism of Newman’s whimsically-surreal comic imagination, taking in railway handcars, red harvester ants, Martin Luther, and the 1975 Sex Discrimination Act.

Though not (yet) as polished as his previous shows ‘From Caliban to the Taliban’ or ‘Apocalypso Now’, this is still comedy of a brilliance and cleverness that few others can match.

At its political heart is Newman’s belief that it is a ‘disaster’ – and politically self-limiting – that Dawkin’s metaphor of the ‘selfish gene’ has ‘become the central story of who we are’.

The idea that the gene is the basic object of evolution is, Newman contends (citing no less an authority than that doyen of 20th century evolutionary biology Ernst Mayr), ‘totally non-Darwinian’. Instead, he sees the true ancestry of Dawkins’ claims (‘We are survival machines – robot vehicles blindly programmed to preserve the selfish molecules known as genes’ who ‘must teach our children altruism, for we cannot expect it to be part of their biological nature’) in the doctrine of original sin, rather than Darwin’s Origin.

In its place – and with tongue placed firmly in cheek – Newman proposes his own theory, ‘survival of the misfits’, inspired by a line from a WH Auden poem: ‘As a rule, it was the fittest who perished, the misifits, forced by failure to emigrate to unsettled niches, who altered their Structure and prospered.’

En route he takes on what he styles three ‘dogmas’ of the gene-centric view (acquired characteristics are never inherited; gender roles are genetically determined; selection only happens at the level of the gene), riffs off of the biography of anarchist prince Peter Kropotkin; and does a remarkable imitation of the late great paleontologist Stephen Jay Gould (Newman apparently started out as a mimic).

Though drawing upon some fascinating biology – such as the amoeba Dictyostelium discoideum, which groups together to engage in seemingly altruistic acts of cooperation when starved – the show’s funniest moments are probably when Newman fools you into thinking he’s telling the truth only to embark on another wild flight of fancy.

For example, a glorious ad hominem attack on Dawkins begins with the seemingly innocuous claim that Newman has a friend who once worked as a postman, and ends with the author of The God Delusion wrestling this (now clearly fictional) friend in a circle of piss in his driveway to prove a point about innate human selfishness.

While I’m sceptical that the battles between gene selectionists and their opponents (or between neo-Darwinists and neo-Lamarckians) really have the political import that Newman imagines, Dawkins’ metaphor has all too often been misrepresented as implying that people are inherently selfish, not just genes.

That such an attitude is politically toxic should come as no surprise. That one of Britain’s most talented comedians has decided to make it the focus of his latest foray is a most welcome development.