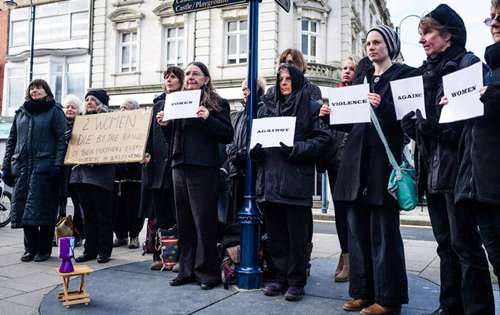 ‘If that blue were an eyeshadow, it would look good on you’ (Kimberley Rose, One Billion Rising) 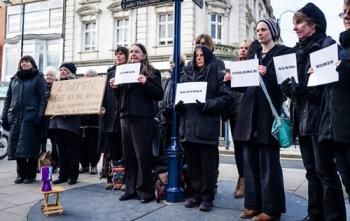 From a Machynlleth production of the Vagina Monologues, via flash-mob dancing in Lampeter, Carmarthen, Swansea and Cardiff, to Women in Black’s silent vigil in Aberystwyth, Wales was very much part of One Billion Rising. Two women die by the hands of their partners every week in the UK, say Women’s Aid, with one incident of domestic violence reported to the police every minute.

No wonder Aberystwyth Women in Black’s silent vigil collection for Women’s Aid was so successful – the topic struck home to women and men alike. A young lad, mates waiting, got off his stunt bike and dug into his pockets for some coins, an old woman rummaged through her trolley bag for a willingly-given, but not-easily-spared, contribution, one woman muttered ‘Been there, done that’.… It was moving to witness.

Meanwhile, red-and-black-clad women moved towards St Catherine’s Walk in Carmarthen, tentatively at first, but growing in confidence as they realised that so many had heeded the call and they were not ‘gonna make right idiots of ourselves’.

Cath Rigler, who participated, thought the walk towards the event ‘offered women the opportunity to talk about violence before the dance, which then felt like a liberating relief of that process - a joyful empowering celebration’.