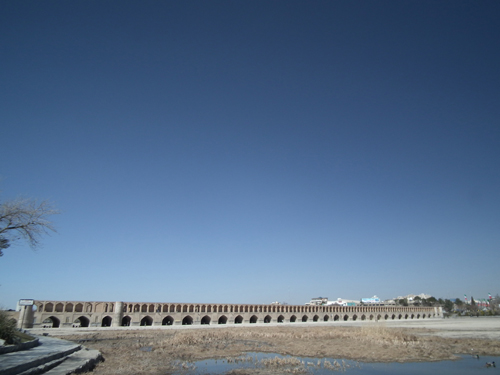 Our two Peace News editors visited Iran last month as part of a US-UK peace delegation. They bring back conversations and observations. Part one. 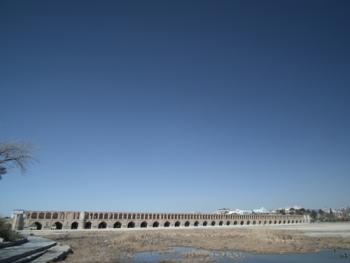 The bed of the Zayandeh River in Isfahan, 16 February 2013 Photo: Milan Rai

In Isfahan, the swan boats are hooded. Just like our swan boats on the pond in Hastings, they are in their winter sleep, nestled together along the river bank under their red and blue PVC coats. It is seven years since I visited Isfahan. In May 2006, the white swans were being pedalled among the fountains in the Zayandeh River below the many-arched Kadju Bridge.

The roller-skaters are still gliding through the riverside parks. A wobbly young woman is clutching and lurching her way towards mastering the wheels, while three whooping young men soar along the road behind a truck clinging on in the slipstream. But Zayandeh, the Life-giver, is empty. Drought. The bed is dry and people wander across the dusty silt as if there was a misplaced melancholic ice-fair going on.

I returned to Iran last week to see how US sanctions had affected people on the street. Shops are full of food. The bakers are peeling the huge flat breads off the insides of their ovens for their many customers: the bread prices are kept down by government subsidies. But in a side street in Shiraz, we pass a large crowd pressing around a gate in a high wall. Then a group of women split off and race each other down the street because they have heard that food vouchers or something similar may be handed out at another gate. 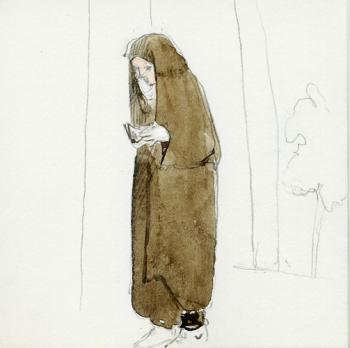 Ahmedinajad’s promise in 2005 to ‘put oil money on the kitchen tables of the people’ has cushioned them for the moment from the full effects of the United States’ sanctions that are slicing off Iran’s economic contact with much of the world. On another continent, Peugeot Citroen had to lay off 8,000 workers partly as a result of being severed from the Iranian market. The poor of Iran have been warned that the price of bread may have to go up after the May elections.

On the culmination of the 10 days’ celebration of the anniversary of the Iranian Revolution in Tehran, we were removed from the city centre, unable to take part in ‘Death to America’ chanting or even to view the enormous demonstration that was taking place in the middle of the city.

We celebrated the overthrow of a brutal regime by being escorted by our minder to the deposed shah’s palace on the cool airy and unpolluted northern slopes of the city where the rich still hang out in large marble mansions. They are also shielded from the effects of the sanctions in the particular ways that the very wealthy have at their disposal.

It was the middle classes or the educated classes who talked to us of the personal anxieties that sanctions caused.

A young graphic designer, Sa’adi, who was working in a carpet shop in the Isfahan bazaar told me how design work had dried up because companies weren’t commissioning adverts, flyers, logos; they were pulling in on all extraneous expenses. His ideal was to do a masters degree but he was scared of spending the money on further education and then finding himself yet again without work. Maybe he should stay in employment selling other people’s creativity. He was surrounded by beauty – the nomads’ pomegranate-dyed rugs and the blue-tendrilled tiling of shah Abbas’ mosques – but his own creative life seemed to have dried up. 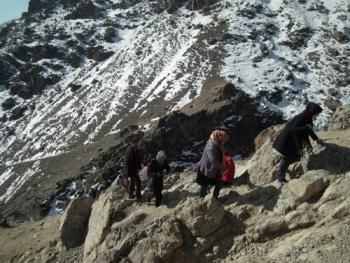 We climbed a river valley in the Alborz mountains:a still-snowy pleasure garden with hundreds of young people, some with walking gear, some with picnics, joyously climbing. The path was lined with dried fruit stalls piled high with glowing yellow raisins and glistening red fruit leathers.

In the teahouses, there were courting couples and friendship groups: some drinking tea with saffron sugar lumps, some smoking honeyed hookahs.

I fell in with some students bouncing down the hillside: young men and women from different disciplines who had come together to volunteer for a NGO that ran a school for Afghan refugee children who were paperless and had no access to state education. They were off to a curriculum planning meeting. Siavash, who taught the children science, was doing a masters in chemical engineering and biochemistry. He wants to go abroad to do a PhD. From this year, the US is not allowing any Iranian students to study subjects connected with energy at American universities. So he will try to go to Sweden.

Mahmed, a young scientist in a coffee shop in Yazd, talked about how he could no longer access academic journals, papers and databases; nor could he manage to get visas when he was invited to conferences overseas. He had a brilliant mind that had collapsed into depression through unemployment. As a child he had attended one of the national Schools for Gifted Children; he believed that of the 100 children in his year, he was the only one remaining in Iran. When I asked what effect the sanctions were having on the psychology of the people he said: ‘It is like someone who has cancer. He sees himself dying and doesn’t know if or when it will stop. Prices are rising daily. If a person thought that they could get better then maybe the cancer would go away, but people don’t think it will get better’.

Iran is a huge, sophisticated and developed country whose economic contact with the rest of the world is being incrementally cut off. The appearance of a lively economy is there in the big infrastructure projects – the towering cranes, new roads, bridges, mosques – but, looking closely, there were many, many building sites that were empty of labourers. It feels like an anxious time of dignified waiting and conserving, hoping that perhaps economic life will start flowing more easily again.