Anthony Quinn, Half of the Human Race 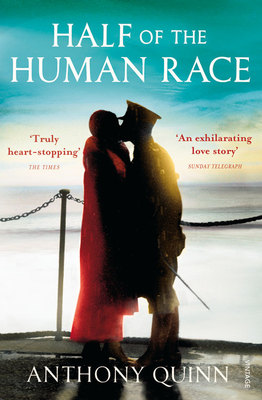 On paper this book should have a lot to offer PN readers. It begins in 1911 with the introduction of Connie Calloway, a fledgling suffragette, to Will Maitland, a cricketer, and traces their relationship through her increasing involvement in politics and his eventual path to war. This is a fascinating historical period, and a fictional account of a young woman moving from talk to action, whilst drawn to a man who despises her values, should have engaged and involved me.

Unfortunately, it didn't. It is competently written, and well researched, but I found myself questioning the characters throughout. Will is supposed to be an attractive man whose relationship with Connie forces him to change his mind on suffrage.
Yet, in the early section of the book, I couldn't really understand why she was drawn to him. When Will proposes, she tells him she'll let him know in a week, and promptly goes out to smash a window, so ending up in jail. While it is obvious why she acts, I found it a wasted opportunity that the author didn't explore her motivations further.

It is true activists often don't tell family what they are about to do, but leaving a man dangling waiting for his answer before you go to jail? That just didn't ring true for me.

The war sections are similarly disappointing. Will nobly tries to stop his troops from being sent on a suicide mission, fails, and ends up in hospital. Again, in a novel that has a political dimension, it would have been interesting to see the author explore more about the consequences of war, the reasons to fight against it, the divisions in the suffrage movement about whether or not to support it.

Instead, we get a coincidence of staggering proportions – Connie just happens to be his nurse. Yet again he proposes to her, and, yet again, she turns him down. I think this time it is supposed to be because she wants to be an independent woman, but, yet again, I was left feeling I was being given an account of how a feminist should be expected to behave, without any real sense that this was actually what a feminist would have done.

These criticisms are minor if you enjoy a love story and a light read, but my real ire is for the publicists and reviewers.

This book is promoted as an important historical novel, revealing England at a time of great tension. I don't think it is either. This is actually good commercial romantic fiction, and if it was written by a woman, it would be marketed as such. So I find it somewhat ironic that a book allegedly about feminism is fêted as a serious novel, just because it happens to be written by a man.