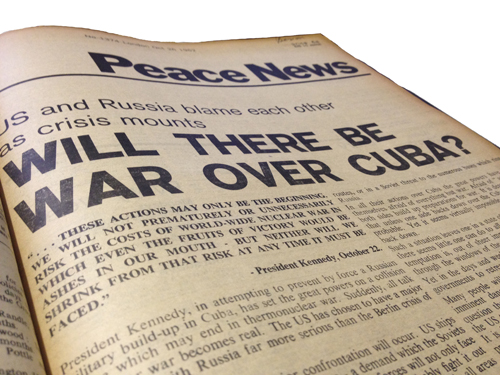 Secrets of the Cuban missile crisis, 50 years on 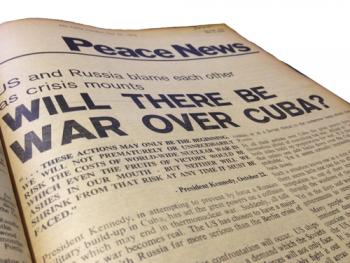 Twelve US navy ships (part of the US blockade of Cuba during the Cuban missile crisis) were dropping practice depth charges on B-59, a submerged Soviet submarine, trying to signal that the sub should surface. The captain of B-59, Valentin Grigorievitch Savitsky, panicked, believing that the Third World War had started. He gave orders to fire a nuclear torpedo, saying, according to one account: 'We're going to blast them now! We will die, but we will sink them all - we will not disgrace our navy!'

Savitsky needed firing consent from two other officers, political officer Ivan Semonovich Maslennikov and second-in-command Vasili Alexandrovich Arkhipov. According to Thomas Blanton of the US National Security Archive, a university research group based in Washington DC, it was Arkhipov who blocked the firing of the torpedo, which would almost certainly have led to full-scale nuclear war.

B-59 surfaced and the confrontation was resolved without violence.

Unfortunately, the Cuban missile crisis continues to be seen as a triumph of Western power and diplomacy, rather than an indictment of both US and Soviet foreign policy.

The bare bones of the story are these: a US spy plane spotted Soviet nuclear missiles in Cuba on 14 October 1962; US president John F Kennedy was informed on 16 October; on 22 October, Kennedy revealed the existence of the missiles and declared a blockade of Cuba, demanding the unconditional withdrawal of the SS-4 missiles.

On 27 October, the same day that a nuclear torpedo was nearly fired at US ships, Kennedy issued a secret ultimatum to the Soviet Union. Russian leader Nikita Kruschev backed down, ordering the withdrawal of the weapons, and ending the crisis.

What was the real danger from the Soviet weapons? Kennedy remarked privately to his advisors (contradicting his dire public warnings): 'You may say it doesn't make any difference if you get blown up by an ICBM [inter-continental ballistic missile] flying from the Soviet Union or one that was 90 miles away.' (Ernest R May & Philip D Zelikow, The Kennedy Tapes: Inside the White House during the Cuban Missile Crisis, Harvard University Press, 1997, p91)

As Noam Chomsky has pointed out: 'In private discussions the Kennedy brothers expressed their fears that the presence of Russian missiles in Cuba might deter a US invasion of Venezuela.' (Hegemony or Survival, 2003)

US attorney general Robert Kennedy warned a top-level meeting on 16 October that if in the future 'some problem arises in Venezuela', the US could face 'Castro saying: “You move your troops down into that part of Venezuela, we're going to fire these missiles”. I think that's the difficulty….' President Kennedy agreed: 'It makes them look like they're coequal with us.' (The Kennedy Tapes, p91)

At the same meeting on 16 October, the president wondered why the Soviet Union had deployed medium-range ballistic missiles (MRBMs) in Cuba, a provocative 90 miles from the US mainland. He asked: 'But what is the advantage of that? It's just as if we suddenly began to put a major number of MRBMs in Turkey. Now that'd be goddamn dangerous, I would think.'

His national security advisor McGeorge Bundy replied: 'But we did, Mr President.'

Kennedy: 'Yeah, but that was five years ago.'

The US had announced in 1957 that it would deploy medium-range Jupiter nuclear missiles in Turkey, on the border of the Soviet Union; they were actually deployed in 1961-62, during Kennedy's presidency.

Johnson was referring to the deployment in 1960 of 60 US Thor intermediate-range ballistic missiles in England.

This was publicly rejected by Kennedy, despite the fact that he had previously asked for the withdrawal of the Jupiters because they were obsolete – they were to be replaced by Polaris submarine-based missiles.

In its coverage of the missile crisis, Peace News drew attention to propaganda around the missiles. During the crisis, a lot was made by US officials of the fact that the Soviet SS-4s were very vulnerable to attack, and therefore were mainly of use in a first strike on US soil.

The same argument, PN pointed out, could be made of the US-operated Thors on British territory, which took at least 24 hours to be fuelled and loaded with a nuclear warhead: 'they are vulnerable to attack and hence more useful in a first strike than a second strike.' (PN, 2 November 1962)

A front-page editorial in the same issue observed: 'The establishment by Russia of missile sites in Cuba was a dangerous and provocative act, but the US blockade was something worse: it was a manifestation of the belief that one side has certain “rights” in the Cold War which are denied the other side.'

A blockade is legally an act of war, meaning that the US 'quarantine' around Cuba was actually a declaration of war against Cuba.

PN did not ask, but it is worth considering the US/UK reaction if the Soviet Union had attempted to impose a naval blockade of the British Isles after the deployment of US Thor missiles in 1960, demanding the unconditional removal of these first-strike, destabilising weapons.

We would not be here to discuss the question.