Och, och, there's a monster in the loch 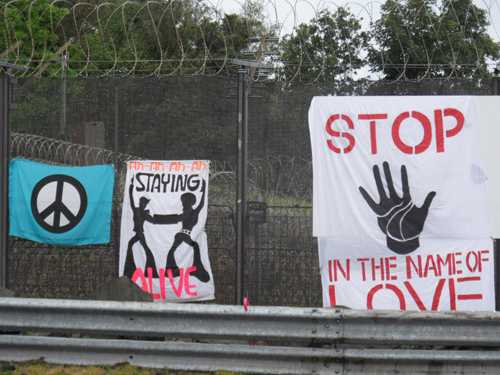 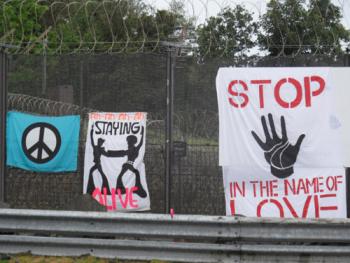 Trident Ploughshares affinity group 'Rise Up Singing' organised two days of tuneful protest at (and a blockade of) the Faslane nuclear submarine base on 16-17 September.

There was a busy day of workshops, singing practice and banner-making on 15 September.

The next day, more than 50 people headed to Faslane to raise their voices in protest against the Trident submarines housed there.

Two visitors from Bhopal described their campaign for justice for the survivors of the chemical disaster in 1984.

A new song about Faslane Peace Camp's 30 years of resistance was sung several times, and soup, rolls and cake were enjoyed at the Jeely Peace cafe.

A smaller but still vocal group returned on Monday 17 September and four people managed a very brief blockade of the gate.

A peace camper was also arrested after police discovered lock-on tubes on the underside of the bike trailer he was using to deliver tea to the singers. Everyone was released later.