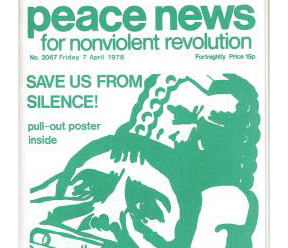 Albert Beale makes a personal selection of a few of the more noteworthy images and pieces of writing that have appeared in Peace News over the last 75 years. Some of the items are chosen because of their eloquence, some because they typify PN's often lonely and unique take on the world, and some because they connect with major world events. And sometimes all three. 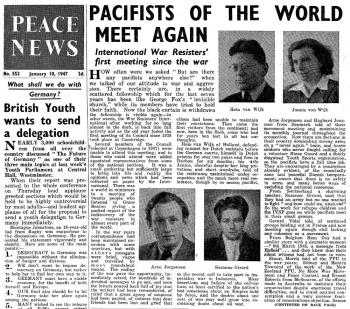 One of the challenges still regularly thrown at pacifists today is the “But what about the Second World War?” question. This might be thought to have been even harder to deal with at the time. But James Avery Joyce rose to the challenge on the front page of PN on 26 September 1941.

“At this time ... millions of human beings find themselves – simply because they have been born in one spot rather than another – flattered, bullied and conscripted by their respective fuehrers into two utterly artificial and hostile slave-societies, with their minds and bodies riveted to machines, each deluding himself that he can break the will of the other and coerce it into some preconceived pattern.

“The pacifist, whether he thinks one side is “better” or not, cannot take part in this false and futile contest. He does not, for one thing, believe that a “nation” can be frightened into this or that shape – unless it be an ugly and undesirable shape... That men can be made to believe that your system is better than theirs because your bombs are more painful than theirs, is a conception and philosophy of human behaviour which the pacifist cannot possibly comprehend... The terrors of “victory” – anybody’s victory – are such that the pacifist shrinks from inflicting them yet again on mankind...

“By freeing the human mind from the primitive tribal obsessions which have made 20th century man a cog in the great engines of war, pacifism has released him from the greatest tyranny and slavery of all.” 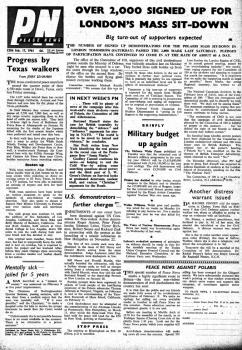 Peace News has consistently – and, as a pacifist paper, inevitably – been critical of the idea of “the nation”. It has also been the home of much politically imaginative writing. These threads come together in the source of the following extracts, an article entitled “Some thoughts on political murder” by Roger Franklin in the 12 July 1968 issue. [Martin Luther King has been assassinated in the April of that year, and Robert Kennedy in June.]

“The fact that such non-violent leaders as Martin Luther King ... suffered fates similar to the Kennedy brothers – who held, or sought to hold, state power based on violence – must not lead us to confuse the roles played by these different kinds of leaders...

America is a political chimera, a fiction actually, but one that exists because of a confused mental image held by millions of people... This abstract political ‘America’ can no more grieve for the life of a political figure than it can for the hundreds, nay thousands, of victims it feeds daily into its war-machine...

Only by preventing the acquisition of such power as that held by an American President, or by the supreme leaders of any other monster nation-state, can we hope to avoid mass killing on a scale far greater than any assassin could ever achieve.” 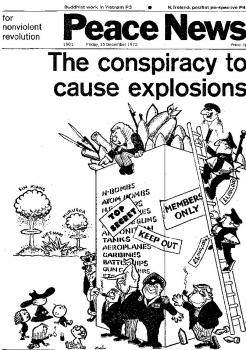 During the Angry Brigade trial - when a group of radicals was accused of, and some convicted of, "conspiracy to cause explosions" - Donald Rooum's cartoon summed up PN's view of the relative demerits of the violence of the state (15 Dec 1972)

The paper’s pages have often been ahead of the times in being open to discussion of then-unpopular social issues, and matters of sexual politics, such as homosexuality and feminism. And in the case of non-hysterical discussion of paedophilia, most of the world still has to catch up. On 27 June 1975, the PN letters page carried this response to a report by Roger Moody in the previous issue about a group devoted to counselling paedophiles.

“Does ‘boy’ mean male under the age of consent for homosexual activity, under age for heterosexual activity, or before puberty - and similarly for ‘girl’. I do not ask out of prurient curiosity, but because the different answers to these questions have considerable bearing on how I (and other people I have talked to) feel about pedophilia.

“There is no doubt in my mind that the age of consent for all forms of sexual activity should be reduced to 13 or 14, in order to bring anomalous situations regarding contraception and male homosexuality closer to the situation that actually exists. I also have no doubt that in an ideal world, free sexuality between people of all ages and sexes will be a positive benefit to all and the myth of childhood will be totally dispensed with. However, we are not there yet... and if I were responsible for a young child in the world today, I would want them protected from sexual intrusions by older people.” 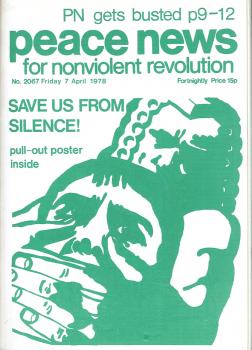 PN announces that all the editorial collective, as well as the publishing company, were being hauled up before the lord chief justice charged with contempt of court for having named an anonymous witness in an official secrets trial (7 April 1978)

During the upsurge of anti-nuclear-weapons activities in the early 1980s, PN printed thousands of extra copies for sale on major demonstrations – and was careful to explain to new readers what it was about. This is an extract from an editorial in the 16 October 1981 issue.

“The nuclear arms race is not just the work of a few evil or misguided people at the top, but has its roots in the structure and attitudes of centralised, industrial society, where relationships are power relationships: government over “ordinary” people, rich nations over poor, men over women. The threat of war will stay with us as long as these patterns of dominance and submission exist... “Nonviolent revolution entails taking back the power that has been taken from us, and refusing to exercise illegitimate power over anyone else, whether that power be domestic tyranny, economic exploitation, or the threat of military force.” 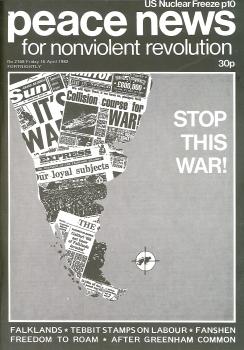 With war threatened following the Argentinian invasion of the Falklands, Peace News was a leading voice in the opposition to the really quite popular war (16 April 1982)

Occasionally, the outside world has impinged on PN unexpectedly, with surprises ranging from a prestigious national press award to legal attacks. One of the latter was the writ issued by a company which organised trade fairs for suppliers of “security” and torture equipment. As the paper explained to its readers in the October 1995 issue:

“COPEX: no cop-out by Peace News

“For the first time in its almost 60-year history, Peace News is being sued for libel. The case is being brought by COPEX, the Covert & Operational Procurement Exhibition... “As far as we are concerned, this whole area of business is of concern to our readers and to all those working for social justice... “Far from apologising to COPEX, we aim to use this libel case to cast more light on the world of covert operations...

Albert Beale has spent two stretches – his word – as a co-editor of PN, and also founded and co-edited its one-time sister publication, Nonviolent Action. He is currently writing Still Against All War, a brief history of PN’s first 75 years. Peace News will be running more archive excerpts this year.

This page has been modified. A person who was mentioned in the Taboos section of this article asked for their name to be removed on the grounds that their letter had been framed inappropriately and quoted selectively.