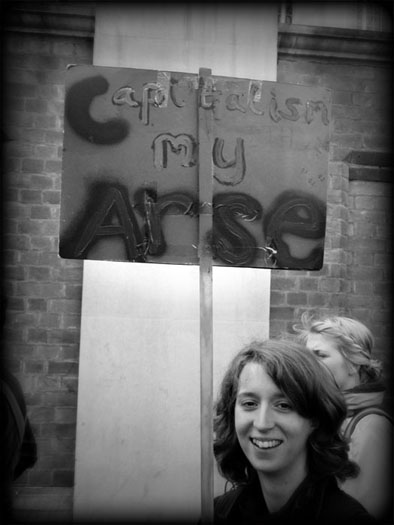 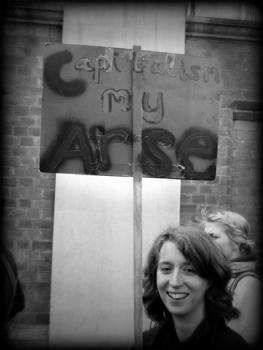 I was going to belatedly write about the London demo against cuts but have been waylaid by a novel written by HG Wells in 1913. The World Set Free is one of his prophetic screeds in which – by the 1970s – everything is produced, manufactured, and propelled by nuclear power. In his preface to the 1921 edition, he claimed, with uncharacteristic modesty, “the misses in the story far outnumber the hits”. I found his novel unreadable but his preface had this to say about his central prophecy:

“Because of the development of scientific knowledge, separate sovereign states and separate sovereign empires are no longer possible in the world... the remaining interest of this book now is the sustained validity of this thesis and the discussion of the possible ending of war on the earth. I have supposed a sort of epidemic of sanity to break out among the rulers of states and the leaders of mankind.”

Well, well, Mr Wells: the collapse of capitalism and the arrival of peace on earth must be numbered among your “misses” but you did admit your “dream of highly-educated and highly-favoured leading and ruling men, voluntarily setting themselves to the task of reshaping the world, has thus far remained a dream”.

As I understood this book, before I threw it aside, Wells posits the case for world government and, while not shrinking from its dangers, commits to the notion that nuclear energy will somehow bring this about.

My favourite Wells’ novels are The History of Mr Polly and Wheels of Chance rather than The War of the Worlds and its like. I’ve written here before of Wheels of Chance, and its adept fusion of cycling and feminism avoids universal prophecy.

In his preface to The World Set Free (freed by a world government presumably) he can still write, despite the elitist tone above, “the fact remains that it is in the labour class, and the labour class alone, that any conception of a world rule and a world peace has so far appeared”. I suppose Wells’ labour class was well-represented on the London demo.

I took care, however, to avoid listening to the highly-educated and highly-favoured leading and ruling men telling us what to do and how to do it, from their exalted platform in Hyde Park. By the time I reached the park, the speechifying had ended and the amiable demonstrators were going home. I’ve largely given up on set-piece centralised demos and this was the first one I’d been to since the big Iraq war turn-out. I decided to go because I was so angry at Westminster’s coterie of chancers and shysters – blue, pink, and yellow alike – for promoting the complacent mantra that there is no alternative to the poorest bailing-out the richest.

I thought we should show our anger but our long toothless crocodile was, in the end, literally a stroll in the park; a slow-moving picnic. There was a time in my life when, if nothing else, a demo was an opportunity for joyful reunion but on this occasion I’d only recognised a couple of faces before, to my pleasure, I saw a PN hoarding up ahead in Whitehall. And what do you know – it was staffed by the PN editorial team; still working instead of lazing on a sunny afternoon.

Three coach-loads came up from Stroud and my ambling companion was the photographer Fred Chance. Both of us were vastly entertained by the invention and wit of the banners and placards the demonstrators had made.

I even saw a policeman smile – how young they are these days – and it was very evident that the police presence was low-key and almost in a doze.

When we passed Fortnum’s in Piccadilly I was unaware that the so-called “occupation” was under way. Here, it seems, an altogether different police force bothered itself with arresting people for peacefully entering the chosen shop of the highly-educated and highly-favoured.