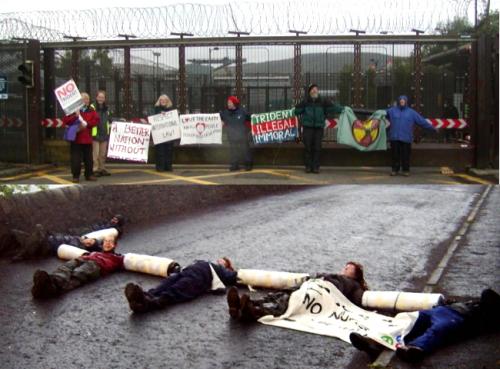 It is not just the nuclear weapons that are costing a fortune. The ill-fated and unfortunately-named HMS Astute is the nuclear-powered sub that was the scene of a fatal shooting a month ago. What’s more, it accidentally ran aground off the Isle of Skye last October and has previously suffered a fire on board and being hit by a falling ramp, as well as problems with its toilets. Soon after the Scottish election, Astute limped back into Faslane, only days after departure, with some other difficulty that needed million-pound repairs.

Activists are going to take this lying down. Four days after the Scottish election, 10 of us did exactly that, locked on to blockade both the north and south gates of the nuclear weapons base at Faslane. We prevented people entering and leaving for a few early morning hours to allow the morning shift workers to think about their responsibilities.

In particular, we were thinking of the Nuremberg principles in relation to the deployment of an indiscriminate, illegal and unaffordable technology that could still bring to an end life as we know it, without even being fired.

The blockaders, from Faslane Peace Camp and Trident Ploughshares, worked together in a seamless pincer action on a wet and windy early morning!

Our actions are not illegal. Once again the Scottish people have voted overwhelmingly. This time, there is a clear parliamentary majority for the Scottish Nationalist Party who have a manifesto promise to put pressure the UK government to remove these illegal weapons from Scotland. Sandra White MSP (SNP) called for direct action for disarmament at Hiroshima Day remembrance events in August.

Trident Ploughshares and Faslane Peace Camp were acting to remind the Scottish government of the strength of public feeling. The Holyrood government can expect support from the Scottish people if they take action on two counts. Firstly requesting an opinion from the lord advocate on the legality of Trident in relation to the Scotland Act, and, secondly, calling on the UK government to remove Trident and enter negotiations to establish a convention to ban nuclear weapons globally. Scotland has the obligation and the right, under the terms of the Scotland Act, to refuse to be complicit with the possession of Trident.

From Faslane Peace Camp, Leona O’Neill said: “As citizens of a world ruled by fear, where the interests and wealth of a few are served by the subjection and poverty of the majority, we are acting to encourage the newly elected Scottish government to uphold international humanitarian law. As citizens of a world suffering the aftermath of the Japanese earthquake and ongoing environmental devastation is caused by nuclear technology, we object to nuclear weapons and submarines powered by nuclear reactors in our seas.”

Cardinal O’Brien, the Scottish Catholic church leader, was at Faslane on Palm Sunday, along with reverend Alan McDonald and Bruce Kent, for a Clergy Action service and demonstration. He visited the newly spruced-up Peace Camp afterwards (see PN 2533), with Leona who had attended the service. He spoke of his long-standing opposition to nuclear weapons, saying: “It is a message I’m all the more glad to repeat here at the gates of Faslane, which is the very heart of Britain’s nuclear weapons industry.”

There has never been a better time to visit Faslane Peace Camp and take action in building the broad movement in opposition to Trident in Scotland, and all nuclear weapons and technology in the world.

Janet Fenton is a member of Trident Ploughshares, coordinator of the Edinburgh Peace and Justice Centre, secretary of Scottish CND and secretary of the Scottish branch of Women’s International League for Peace and Freedom (S WILPF). www.peaceandjustice.org.uk