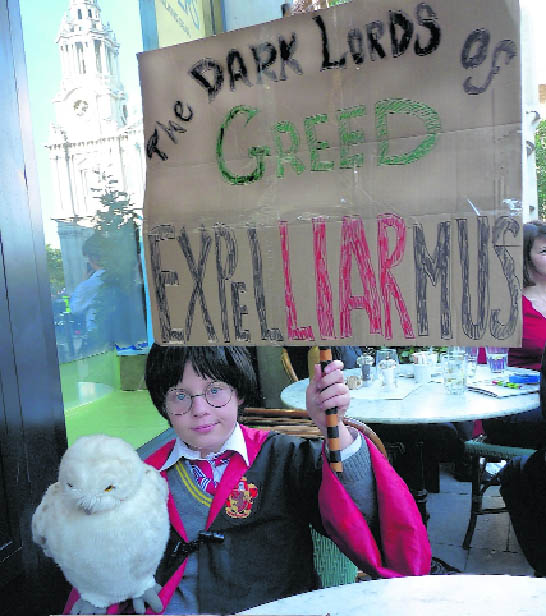 There’s no substitute for the outrage of the streets. 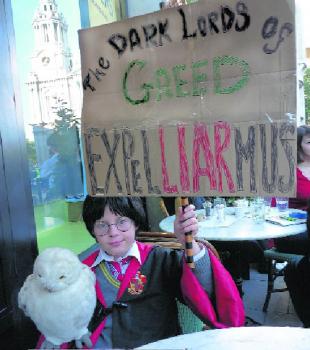 By any means neccessary. Occupy activists use all forms of magic to oust evil at St Paul’s Cathedral

Here I am. Do I really need to do this? Well, yes. Why? Because in the end, it always comes down to the streets. When the greed, the hypocrisy, the assaults on our freedoms, our pockets, our future and our common sense go so far beyond the level of toleration, there’s no substitute for the outrage of the streets.

Internet petitions are fine, and constructive programs of creative community-building keep us sane and help point the way to a future, but those noisy bodies in the streets put pressure on the politicians, the greedy bastards and the high-level criminals to take their frakkin’ boots off our necks, thank you!

I’ve had an amazing day, mostly spent in the company of predominantly young people who have set up Occupy DC in McPherson Square, separate but linked to the events in Freedom Plaza.

The Occupy DC group are mostly locals, and they intend to stay in the square indefinitely. They’re a mix of students and a good sprinkling of older people of varied backgrounds. “I quit my job at Morgan Stanley,” says a well-dressed, gray-haired man. An older woman with a rugged face talks about the protests of the sixties. A slow-talking older man says that he wasn’t an activist in the sixties, he knew that stuff was happening but ignored it. He’s not an activist now – he’s an analyst for a global corporation. But if we don’t bring some reason into our tax system we will be destroying the base of labour upon which an economy rests.

The folks at Freedom Plaza, like us, mostly come from out of town. Judging from the nonviolence training we did last night, more than half of them have never done anything like this before and many of them have come to the action alone, without knowing anyone else.

I admire their courage – I doubt that I would hop on a plane from Iowa or Texas to come demonstrate in Washington DC all by myself, with no support. What if the other kids don’t like me, and I don’t make any friends?

I spent a lot of the day in meetings. It was a bit like a relationship I once had where we spent far more time in couples’ counselling than we ever did having sex – I spent far more of the day in meetings than in the actions the meetings were meeting about. But in a sense, maybe the meetings were actions – interposing this exercise in direct democracy at the feet of the lobbyists and the congress and all the systems that are captives of money and corrupt power. “Demoncracy” I wrote by accident – democracy made servant of the demons of greed.

Occupy DC has two General Assemblies a day. Freedom Plaza has its own General Assembly. With so many people new to consensus process, the meetings are sometimes ponderous – and yet there’s an archetypal quality to it all, people sitting under a tree debating and discussing and coming to decisions together in a process designed to ensure that everyone has a voice. I think we crave that experience, somewhere deep in the soul. It is exactly what democracy looks like, and right now it seems that all over the world people are hearing the call.

At the very end of the night, we wait until the last performer on the Freedom Plaza stage is done, then we strike up the drums and lead people in a spiral dance. “We are the rising sun, we are the change, we are the ones we’ve been waiting for and we are dawning” – we used Raven’s beautiful chant and wove in and out under the stars, finishing with a cone of power.

Then a young woman standing next to me asked for one more song. We sang song after song, from John Lennon’s “Imagine” to a rousing chorus of “What Can We Do with the Drunken Sailor” with the words changed.

It was very sweet, standing in a circle in the night, singing together. Imagine! This is what democracy looks like. Imagine a world where we sing together, and together make the decisions that affect our lives. It isn’t hard to do. Then make that world together. It’s easy if you try. The old, corrupt world falls away and a new world is born.

Starhawk is a leading US nonviolence trainer, activist and witch. This month, she is publishing a book on improving group process: The Empowerment Manual: A Guide for Collaborative Groups, to be reviewed in a future issue. A chapter, “The Five-Fold Path of Productive Meetings,” is available from her site:
www.starhawk.org