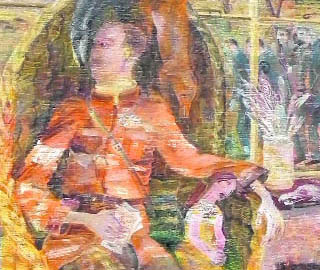 The painter, Lorna Vahey, on how a veteran from the First World War influenced her father's pacifism. 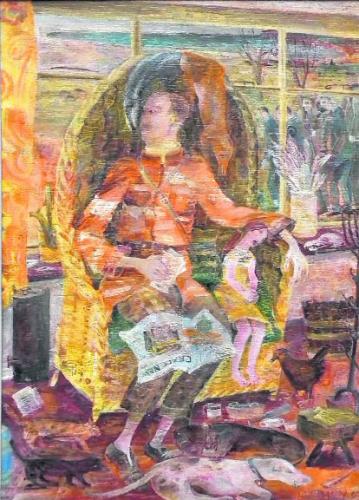 Gillie Woodiwis was an odd, nervy man, usually wearing a hairy suit. I have painted him sitting in my parents’ house where he spent a lot of time in the 1950s. Peace News is on his lap. I am beside him. I was often sat on his lap which I didn’t like much. He handed out highly religious tracts (which at the time, I wondered why my parents tolerated, as religion was usually banned), and was generally strange. He volunteered for the First World War, although he had already had a nervous breakdown after his sisters white-feathered him. He was invalided out after a second breakdown and never fully recovered. Through the window I’ve put the “wrecks in blue pyjamas” – the shell-shocked from the First World War whom my father saw as a child. He talked about them all his life. The questions he had asked as a child: what had happened to them, and why? were the main influence on his thinking and his pacifism.