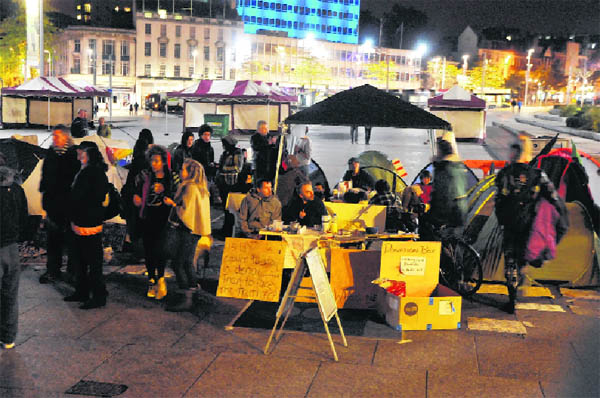 At the start of Occupy London Stock Exchange.

The website had asked people to assemble in front of St Paul’s cathedral at 12 noon precisely (“not early or late”), so of course everyone turned up at 11.45am, milling aimlessly with their banners. At noon a sound system was turned on, pumping out a furious electronic beat... and we continued to mill.

It was Saturday 15 October, and “Occupy London” were acting in solidarity with “Occupy Wall St”, initiated by Adbusters in New York on 17 September. The Wall St occupation, which is based in Liberty Square (Zuccotti Park) in New York’s financial district, says on its website: “The one thing we all have in common is that We Are The 99% that will no longer tolerate the greed and corruption of the 1%. We are using the revolutionary Arab Spring tactic to achieve our ends and encourage the use of nonviolence to maximize the safety of all participants.”

Later on 15 October, following a brief, unsuccessful bid to enter nearby Paternoster Square – site of the London stock exchange – and a subsequent attempt to set up a “people’s assembly” in the cold, cramped area by the side of the cathedral, some bright spark suggested that we return to the cathedral’s sun-lit steps, and we all found ourselves back where we’d started.

PN asked a range of participants why they were there and what they hoped to achieve. Inspired by Noam Chomsky’s statement the previous Saturday, at the Rebellious Media Conference, that the labour movement had played a crucial role in the successes of the Arab Spring uprisings in Egypt and Tunisia, and that this “ought to be known if the occupy movements, spectacular as they are, are going to have real success”, we also asked folk what they thought about trade unions.

Why are you here today?

What do you hope to achieve by being here?

What do you think about trade unions?

Getting the most from mainstream media