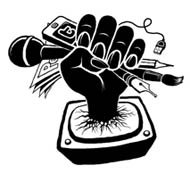 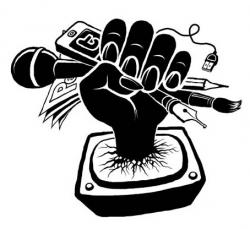 After two years of preparation, the Rebellious Media Conference (RMC), featuring Noam Chomsky, John Pilger, Michael Albert and many others, finally happened on 8-9 October. It was a storming success. Details of what happened, and recordings of various sessions, are available on the RMC website (see end of article).

The RMC began life two years ago, as Peace News staff tried to think of ways to celebrate our 75th anniversary as an activist publication. Our first idea was a dayschool for 40-50 people, organised with Media Lens, to help people get better at putting pressure on the mainstream media. In the end, we had 1,100 people for a weekend conference in two major London venues, with a budget of £42,000, and over 130 speakers contributing to 54 sessions.

On this page are some comments from some participants (with a few responses from us). A summary of the feedback, and a sample of comments, will be available on the RMC site before the next issue of PN.

While a lot of people put a lot of work into the RMC (and the work is continuing as this goes to press), there were two core people who should be mentioned by name, without whom the project would not have succeeded: conference organiser Rebecca Dale (who is taking over as PN finance worker later this month from the highly-esteemed John McAllister), and Gabriel Carlyle, PN promotions worker. While we have no plans to re-run the RMC, Peace News does have other ideas for ambitious radical media projects, to be unveiled in coming months.

The RMC was organised by Peace News, Ceasefire, the National Union of Journalists, Red Pepper, Undercurrents and visionOntv. It was made possible by generous support from the Joseph Rowntree Charitable Trust and Quaker Peace & Social Witness.

Ideas for the future

Milan Rai is co-editor of Peace News and was a co-organiser of the RMC.

A DVD of some of the highlights from the Rebellious Media Conference is available on the RMC website:
www.rebelliousmediaconference.org

More comments, and a summary of the evaluations, will be posted on the RMC website before the next issue comes out:
www.rebelliousmediaconference.org

Getting the most from mainstream media