Bandi, The Red Years: Forbidden Poems from Inside North Korea 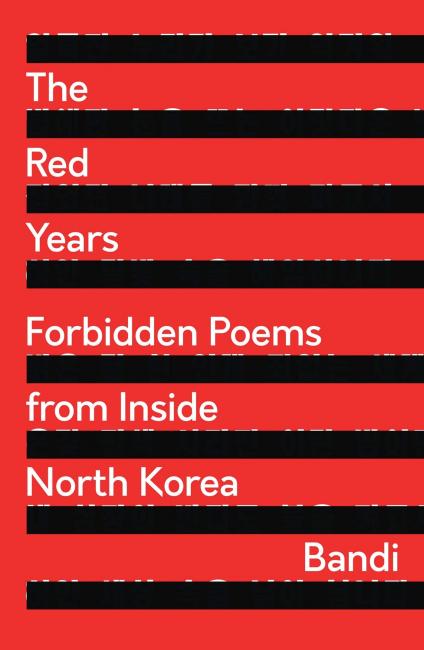 None of us will ever travel to North Korea. We read about the regime and its atrocities, but far away from our information-saturated lives, what could it mean to exist on the other side? Poetry is literature's most condensed form, and in such concentrated doses we begin to get a taste of daily life under Kim Jong-il's regime, one of a permanent, colourless winter.

These 51 poems find themselves melting onto our desks, each one desperate to be read. They are written by Bandi, the pseudonym of a dissident writer whose work has been smuggled out of North Korea and into international acclaim. His first novel The Accusation received wide readership in over 20 countries.

The name Bandi means 'firefly', bringing to mind a single miniscule creature burning brightly, but alone. A solitary illumination whose glare is harsh when contrasted with his bleak surroundings.

We gather in the glow of an individual, in privacy. Bandi evokes a heroic and delicate figure who, at any time, and with no warning and no shadows cast, could be snuffed out unceremoniously, with a casual flick of a greater hand.

The act of reading Bandi's unlikely work gives a sense of complicity in his 'crime' of secret publication:

Though they be dry as desert
and coarse as grassland
miserable as affliction
and primitive as stone-age tools,
Reader! I beseech you—read my words.

Given the extraordinary nature in which they arrive to us, the poems come charged with an extra energy. As armchair sympathisers, and passive appreciators, we collaborate in the projection of a writer's life that could simply be snuffed out -- an illumination that shines to readers who can only remain in his shadows.

The book gives us a window into daily life of unrelenting repression, a giant invisible order claiming ownership of one's thoughts and actions. This imagined experience is not the only thing Bandi offers us; we learn about the nature of his kind of internal pain, and how it elaborates into his daily environment.

The gratuitous violence he witnesses so frequently morphs into the landscape; we witness the hills vomit blood. The presence of threat seeps into all corners of his world. In one dream sequence, Bandi casts ordinary soldiers as a set of green leaves, falling. The pathos surrounding these men heightens, as we witness the violence, a cascade of bodies painted light as leaves, and just as disposable.

How could anyone deal with such an existence?

Bandi suggests that life is only bearable thanks not to a mere flirtation with hope, but instead a dedicated fidelity to subjective truth, a poet's act of revolt. He risks landing himself in prison, as well as his entire family.

As the ice is almost entirely melted, and we find ourselves at end of this book, one poem makes itself heard. It is an urge to blossom, to burst with life; the colour of his surroundings return, briefly: 'Live at least with an open heart, like a fully-blown flower. / Then you will brim over with the fragrance of life'.