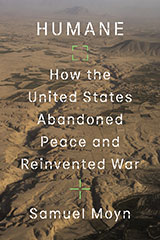 It is challenging and frustrating to read in this book about the efforts nations have put into making war more palatable.

For most people, the idea of a ‘humane’ war is a contradiction in terms, particularly now as we watch Putin’s aggressive war in Ukraine unfold. Samuel Moyn quotes the Prussian general and military theorist Carl von Clausewitz: ‘The fact that slaughter is a horrifying spectacle must make us take war more seriously.’

Clausewitz also warned that laws on the conduct of war could swiftly be broken by a desperate enemy: ‘sooner or later someone will come along with a sharp sword and hack off our arms’ – an all-too-topical observation, given Putin’s recent threats to use nuclear weapons.

Enlisting the help of preachers, thinkers, lawyers and activists, Moyn sets out the history of an argument between proponents of intense war – war that, in the words of prince Andrei in Tolstoy’s novel War and Peace would ‘not take prisoners’ – and those who worked to impose restrictions on the cruelty of war. This counter-movement, the author argues, has come at the expense of abolishing war, the outcome that civilians of all kinds would wish for.

In his first chapter, ‘The Warning’, Moyn introduces Henry Dunant, the Swiss businessman who co-founded the Red Cross and who made the humanitarian treatment of wounded and captured soldiers into an international cause. Tolstoy and others warned that the focus on caring for soldiers and prisoners would detract from the horrors of war itself.

The following chapters examine US involvement in successive wars (which resulted in further attempts to toughen up the rules on how war should be fought) before concluding with a meditation on the moment in 2013 when peace campaigner Medea Benjamin heckled then US president Barack Obama during a speech at Fort McNair in Washington DC.

According to Moyn, the peace movement fell into a ‘crater’ when Obama was elected president. In part, this was because Obama appeared to be a reflective man, publicly concerned about his failure to close the prison camp in Guantánamo Bay, the legality of targeted killings, and the danger of endless war posed by armed drones.

I take this book to be a call to activists to focus on the abolition of war. It raises the question of why peace movements fail when modern warfare becomes protracted and invisible.

Another important insight for peace activists is to think about how wars affect the populations of the perpetrator states as well as the victims. For, as Moyn points out, it was Obama’s failure to close Guantánamo, or to bring home troops from Afghanistan, that enabled Trump to claim that he was the only candidate who could use the #endendlesswar hashtag.