Thalia Verkade & Marco te Brömmelstroet, Movement: how to take back our streets and transform our lives 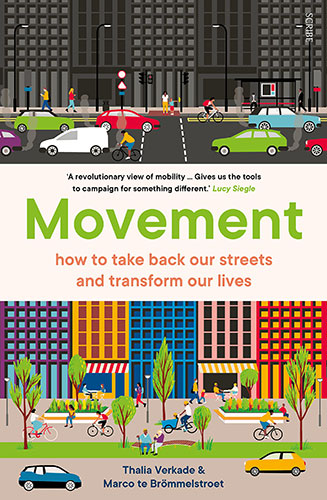 Everywhere I go, on foot or on my bike, I am assailed by cars.

My town is full of cars, and there is a single priority on every road: to maximise the convenience of motorists, never mind the convenience – far less the safety – of other road users.

I have to walk long distances to cross a road because traffic engineers have put up railings to stop me crossing where I want. I have to wait ages at traffic lights because there’s a long phase for motorists followed by a scant few seconds for pedestrians. People do 60mph down my narrow residential street or idle their cars a few feet from my bedroom window.

This can’t be the best way to live – can it?

If you feel the same, then Movement may be a book for you.

It describes itself as ‘asking the fundamental questions: who do our streets belong to, what do we want to use them for, and who gets to decide?’

It questions the dominant view which says that our streets belong to cars, that their main function is to get motorists from A to B with as little inconvenience as possible, and that decisions on how our streets are used should be made by politicians and traffic engineers, not by the people who live in those streets.

The question of who public space is for is never asked. Almost always, it’s just taken as read that it’s for motorists.

The book sets out the problems with cars from an urban infrastructure point of view. I was astonished to find that carbon emissions are not even mentioned in passing but I guess that’s for another book. But it’s clear that the issues with cars go far beyond the fuel they use – which is why electric cars (and, even worse, self-driving cars) are a massive distraction on the crucial goal of hugely reducing car use overall.

As the book says: ‘If someone invented the car today, it would never be allowed on the roads. Think about it – a machine that kills thousands, contributes to respiratory and cardiovascular diseases, and requires more than half the public space in towns.’

A 2015 European Commission study found that, in Copenhagan, driving cost society €0.15/km – a cost borne by everyone, whether they drive or not. In contrast, society earned €0.16/km from cycling.

Tell that to the motorist who berates the cyclist for not paying ‘road tax’ (which is in fact not even a thing in the UK).

Movement looks at small-scale solutions – such as a Dutch nursery which loans cargo bikes to local residents – but also focuses on massive change, such as has happened under mayor Anne Hidalgo in Paris.

Since taking office in 2014, Hidalgo has closed roads, removed parking spaces (her ultimate aim is to remove 72 percent of street parking), added bike lanes, and reduced the speed limit from 31mph to 19mph, all with a view to making the city ‘100 percent bikeable’. Although many of these measures didn’t go down well with motorists, Hidalgo was re-elected in 2020 with a large majority.

There are other examples of cities which have led the way in reducing cars. The common factor in all of them is bold leadership: mayors or councils that have had the vision to see that we cannot go on like this and have taken the bull by the horns in terms of transport policy.

Movement shows that things can change: we don’t have to continue on this destructive, car-dependent path. It sets out the problem and possible solutions, and ends with suggestions on what we can do as citizens to start to reclaim our streets.

I have to say that I often feel utterly despondent about cars as I walk and cycle round my town, but perhaps the answer is to mobilise, to show that life would be better for everyone if we reduced our crazy dependence on these lethal, planet-destroying chunks of metal.

I recently watched the excellent Bikes vs Cars documentary which chronicles the attempts of cyclists in São Paolo (in Brazil) and Los Angeles (in the US) to force their cities to make space for cyclists. The people the film follows are inspiring; the situations they face, depressing.

But Aline, an apparently fearless young woman who we see biking through four lanes of traffic in São Paolo, sums up the whole issue in one sentence: ‘You own a car, not the street.’