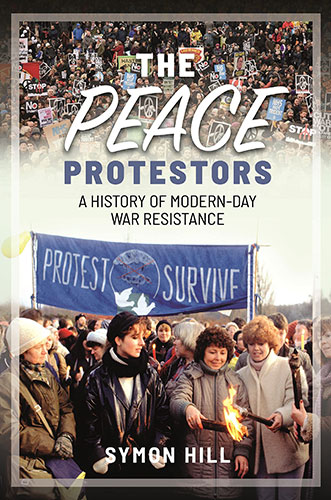 Symon Hill’s impressively comprehensive history of the modern UK peace movement takes us from the moment in 1980 when Ann Pettit had the idea of a women’s walk to Greenham to the 2021 supreme court Ziegler ruling which quashed the conviction of four protesters who blockaded the DSEI arms fair in London.

This is a book packed with detail, much of it familiar to the Peace News readers who lived through many of the events described and who know many of the people involved. I think this book serves two useful purposes: firstly, as an excellent reference book and, secondly, as a reminder that, wherever there is war, there is resistance.

The Peace Protestors has so many examples of this, it is impossible to discuss them all. I will highlight a few.

In the 1980s, much of this resistance took place in peace camps at nuclear bases. While Greenham’s controversial women-only stance ensured it had a high profile, the camps at Molesworth and Faslane (which continues today) had equally important parts to play.

Bases were invaded and convoys pelted or blockaded, leading to arrests, court cases and jail. A strong sense of community developed that helped protesters endure harsh treatment by the police, evictions, and jail sentences. It also led to mass events such as the 1982 ‘Embrace the Base’ protest at Greenham, attended by 30,000 women, and the 1983 human chain of 88,000 people which stretched from UK’s nuclear bomb factories in Aldermaston and Burghfield to Greenham Common.

As with all movements, there were problems. Greenham was critiqued for being too white. When an activist was raped at Molesworth, CND was challenged for its handling of the situation. Nevertheless, this was an era of effective, creative and determined protesting that eventually saw off US nuclear cruise missiles at the end of the Cold War.

Wars have also been a focus of protest.

While the Falklands/Malvinas War in 1982 was popular, a time when protesters felt ‘lonely’ and isolated (facing hostility from the crowd at the victory service, for example), later wars in the Middle East received less public support, making the job of protest easier.

The 1991 Gulf War saw marches, direct action and an international peace camp, while the invasions of Afghanistan and Iraq resulted in vigils and marches, culminating in the largest-ever UK peace protest in 2003.

None of these actions stopped the war machine, of course, but they served their purpose in undermining the government’s case for military action, especially as the failures of both wars became apparent.

One impact of these failures was to see increasing dissent within the army. Malcolm Kendall-Smith, Ben Griffin and Joe Glenton were all discharged after refusing to return to warzones, while Michael Lyons was convicted of disobeying an order when his appeal to be treated as a conscientious objector was denied.

Despite the government’s efforts to increase support for the army with the creation of Armed Forces Day in 2009, by 2011 the number of deserters had risen to its highest level since 1963. When Ben Griffin set up Veterans for Peace UK, many former soldiers were quick to sign up.

My one criticism of The Peace Protestors is that it would have benefited from some analysis of the events described.

For example, I’d like to have seen discussion of why some wars are easier to protest against than others, or how we might have ensured that the anti-war mood in 2003 lasted beyond that enormous Stop the War march of 15 February.

However, these stories of success and failure cannot help but inspire us and teach us lessons of how we can work better to create a fairer, more just world.