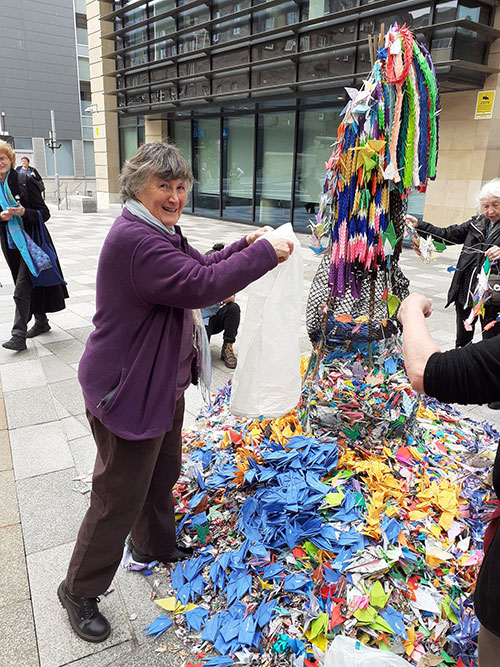 6 August: Scottish peace activist Jane Tallents adds to a cairn of 140,000 origami cranes outside Queen Elizabeth House in Edinburgh, the headquarters of the UK government in Scotland. PHOTO: Trident Ploughshares

In late August, Costa Rica put forward a statement at the UN in New York calling for the total elimination of all nuclear weapons. 147 of the 193 UN member states supported this statement.

Scotland should be Nation 148.

The International Campaign to Abolish Nuclear Weapons (ICAN), the Treaty on the Prohibition of Nuclear Weapons (TPNW) and the Nuclear Non-Proliferation Treaty (NPT) are the key elements in gaining a world without nuclear weapons.

ICAN is a network started in the Global South and grown from grassroots activism and diplomatic efforts since 2007, international from the outset and made up of over 600 partner organisations across all continents. The staff has socio-economic, ethnic and geographic diversity and is overseen by an international steering group of partner organisations which work internationally including the Global South, so it is neither a ‘western’ campaign, nor an ‘emotional group’ lacking credibility about national security.

ICAN is more like a Mexican wave of sanity, made up of UN member states, academics, parliamentarians and thousands of campaigners.

The failure of the nuclear-armed states (NAS) to deliver on Article VI of the NPT (the article that requires complete disarmament) was a catalyst for the TPNW, but the treaties are complementary – both are needed to meet their objective.

I have been active since 2007 with ICAN, at UN meetings and in Scotland, and I had looked forward to being in Vienna in June (for the first meeting of the UN member states that had joined the TPNW) and in New York in August (to see how things went at the first Review Conference of the NPT after the TPNW was adopted). (See PN 2661 for a report on Vienna – ed)

Ending up stuck at home offered a chance to reflect on Scotland’s contribution.

The Vienna Declaration, the outcome of the TPNW meeting, strengthens a growing global understanding that nuclear weapons are a terrifying anachronism, standing in the way of the world’s developing capacity for urgent and universal legal and technical responses to conflict, migration, hunger and the climate emergency.

The war in Ukraine calls out nuclear deterrence as a dangerous fiction that increasingly and terrifyingly demonstrates the enormous deficit in the UN security council’s energy or capacity for effectively delivering any response to security threats except different forms of violence and force – even with the input of the non-nuclear-armed non-permanent members.

There is ongoing debate about the value (or otherwise) of military alliances. In Scotland, it expands to include who would be our future allies and how we would negotiate co-operation as the constitutional question arises again.

The UK government’s flagrant disregard for the opinions or the safety of the people who live here (Scotland cannot change UK government policy) is seen in: our relationship with the EU; the UK’s modernisation of the nuclear weapons deployed from Scotland; the UK’s immigration policy; and choosing to go to war. They don’t bother about what we think in Scotland.

Our close neighbour Ireland is committed to the TPNW, ensuring that the global community will protect their government’s ability to say no to all nuclear weapons.

Similarly, a Scotland that accedes to the TPNW could not allow any nuclear weapons activity on its territory, whatever relationship it had with another state. Scottish government officials and politicians should be exploring – now – practical steps and opportunities arising.

Scotland can understand and develop a diplomacy that is based on the experience we have here in Scotland rather than the idea of being an element in the UK.

“We in Scotland hope for at least understanding, and ideally solidarity, from the rest of the UK”

Working in the existing Scottish social cultural and political framework, Scotland can contribute to the global good by making a clear commitment to the UN-based international order, upholding the UN’s sustainable development goals, signing all the prohibition treaties on weapons of mass destruction, and observing the UN legal instruments to uphold and protect human rights.

Formal education is a devolved responsibility, meaning that the Scottish parliament can pass its own laws in this area.

Scotland could include in its formal education criteria a commitment to literacy on UN processes and transnational responsibilities. This could produce within five years a generation of young adults with confidence in themselves and in their country’s capacity for intergovernmental advocacy.

Scotland has its own varied and diverse culture that comprises many elements which come together in a unique way that is not even constant.

Through devolution, Scotland is recognised as a cogent cultural and legislative entity, with a distinct and independent existence which is recognisable, emotionally-engaging, and compelling. Its parliament is elected every five years through a system of proportional representation, meaning that those elected far more fairly represent the wishes of the electorate than the first-past-the-post-and-devil-take-the-rest system used at Westminster.

At Holyrood, it is practically impossible for a dominating political party to form a government without the inclusion of members of other parties. The legislative powers devolved to Scotland were set out in the Scotland Act 1998 by the UK parliament at Westminster.

The presence of nuclear weapons in Scotland unfairly impacts on the human rights of the people of Scotland, on their human right to life. It is unfair because the UK’s nuclear arsenal is based here despite legitimate opposition.

We are not talking here about opinion polls by YouGov, we are talking about the actual votes cast by the electorate for those who represent them and who form the Scottish government.

In the UK parliament, the overwhelming majority of Scottish MPs have also consistently rejected the upgrading, replacement or maintenance of the Trident system, but without effect because we are always outnumbered. (The number of Scottish MPs at Westminster was reduced by 13 to 59 out of a total of 646 after devolution in 1998).

The people of Scotland are particularly discriminated against because we carry greater risk than other UK citizens of being impacted by accidents or attack involving the Coulport nuclear weapons store and the Faslane nuclear missile submarine base, even though we have no meaningful representation in decisions about them.

The Westminster government has no mandate over the territory where its nuclear weapons are stored and based. Whatever way you count them, Scotland’s elected representatives oppose the existence of these things and do not support their presence in Scotland.

Nuclear weapons-related decisions are being made in a truly outrageous democratic deficit, with ‘might is right’ rather than any manifestation of democracy in Scotland.

As in so many matters, the UK government acts with an impunity that highlights its real and lasting disregard for its citizens, including particularly the elected representatives of people in Scotland. We in Scotland hope for at least understanding, and ideally solidarity, from citizens in the rest of the UK.

Despite obfuscation by the UK government and the ministry of defence, through Freedom of Information requests, John Large, John Ainslie and Rob Edwards (in the Ferret) have managed to uncover the increasing risk to the environment and to human health arising from radioactive waste discharged from nuclear-powered and nuclear-armed submarines at Faslane. The 200 or more warheads stored at the vast site at Coulport pose their own risks.

When the cap on the exact number of nuclear warheads increased last year, three months before the Scottish elections, Scotland expressed its response by delivering a parliament with an increased majority of members who have signed the ICAN pledge for global prohibition and elimination.

Among the world’s countries, there is huge support for Scotland to be able to contribute to, rather than be misrepresented at, the UN.

147 UN member states supported Costa Rica’s statement in New York. We could be welcomed as Nation 148 through a contribution to external relations and through modelling an alternative to patriarchal, neocolonial, extractive and elitist policies that threaten our survival.

Scotland’s support for the TPNW is working towards that, not merely as a tactical move, and independence will not reduce overall resistance to the UK government as though Scots were the rats deserting a sinking ship.

By highlighting and resisting the affront to Scotland’s democracy that the UK government’s nuclear policies present, the UK’s so-called mandate can be called out, and a start made on dismantling entirely the system upon which it relies.

6 August: Scottish peace activist Jane Tallents adds to a cairn of 140,000 origami cranes outside Queen Elizabeth House in Edinburgh, the headquarters of the UK government in Scotland. PHOTO: Trident Ploughshares

Janet Fenton is the development advisor for Peace & Justice Scotland, as well as Scottish ICAN liaison.