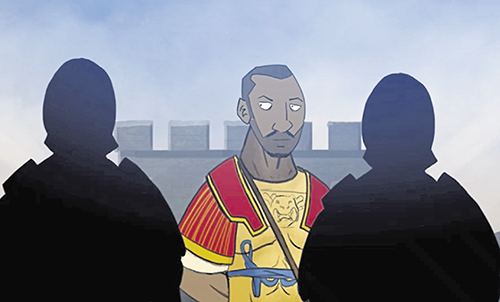 The Roman empire - Britain included - was culturally and ethnically diverse

Many people seem very attached to the idea that ‘the Romans were white’ – and that ‘Britain before the Second World War was an entirely white country’.

This is a still from a video, Roman Britain, which is part of a BBC educational series called The Story of Britain. In 2017, this BBC animation led to national controversy when a right-wing commentator objected to the picturing of a Roman commander as black.

White historian Mary Beard was subjected to a campaign of misogynistic online abuse for defending the video. She was attacked for writing on Twitter: ‘this is indeed pretty accurate, there’s plenty of firm evidence for ethnic diversity in Roman Britain.’

Beard wrote in a Times Literary Supplement blog post that an African-born Roman emperor called Septimius Severus visited Hadrian’s Wall in 208 CE. Again, Beard commented, we don’t know what colour his skin was, but he could well have been black, in today’s terms.

It is recorded in a Roman collection of biographies, the Historia Augusta, that an Ethiopian soldier, a black Roman, greeted Septimius Severus with a garland as he was visiting Hadrian’s Wall. The Historia Augusta is not always a reliable source, but it is interesting that its biography of Septimius Severus doesn’t express any surprise that an Ethiopian was serving in Britain – and doesn’t record anyone else expressing surprise about this at the time.

In 2016, black British historian David Olusoga unveiled a plaque in a churchyard near Carlisle to mark the ‘first recorded African community in Britain’, which guarded a Roman fort in what is now Burgh-by-Sands, in the third century CE.

Beard wrote: ‘One thing is for sure, the Roman empire – Britain included – was culturally and ethnically diverse, from the Syrians in Bath, to Quintus Lollius Urbicus, to the Ethiopian who met Septimius Severus on Hadrian’s Wall and to the wonderful couple from South Shields, Barates and Queenie (“Regina”), he from Palmyra [in Syria], she an Essex girl.’ (There is a tombstone for Queenie which records her relationship with Barates, and their backgrounds.)