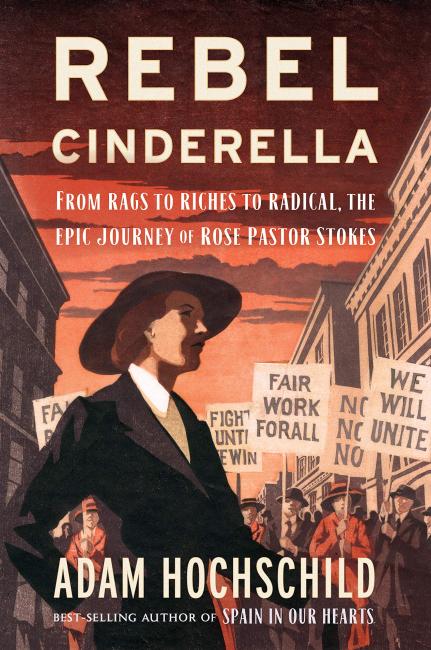 Though their names would barely be recognised today, for two decades few months would pass when Rose Pastor Stokes and her husband Graham did not appear in the newspapers. Indeed, according to one newspaper clipping service, for several years Rose’s name ‘was mentioned more often in the press than that of any other woman in the United States’.

The reasons for her (and their) fame are not hard to fathom. A poor Russian immigrant to the US, in 1905, at the age of 26, Rose married a member of one of the country’s richest families – the immensely wealthy Phelps Stokes clan. The match prove irresistible to the US media.

Among their many possessions, the clan owned what was, at the time, the largest private dwelling in the US, a building with 100 rooms. (‘Legend has it,’ Hochschild writes, ‘that one of Graham’s brothers, in the class of 1896 at Yale, [once] wired their mother that he planned to bring “some ’96 fellows” home for the weekend. The apostrophe failed to appear in the telegram, and his mother replied, “Many guests already here. Have only room for 50.”’).

In stark contrast, Rose had arrived in the US at the age of 11, and spent 12 years working 10- or 12-hour days in a Cleveland cigar factory, seldom making more than $8 a week (the equivalent today of about $240). Cigar workers ‘suffered the second-highest death rate from tuberculosis of any occupation in America, only stonecutters had it worse’.

Rose and her fellow Cleveland workers had been turned away by the Cigar Makers’ International Union, who were not interested in organising the women or new immigrants who rolled cheap cigars for poverty pay. Nevertheless, following her marriage to Graham, Rose did get involved in left-wing politics: the pair joined the Socialist Party in 1906.

It was one of the most dramatic and tumultuous periods in US labour history. There were militant strikes led by the then-newly-formed Industrial Workers of the World (the ‘Wobblies’). The Socialist Party gained ‘one member of Congress, 79 mayors, thousands of city council members and other municipal officials, and 33 state legislators in 14 states’ – and won six percent in the 1912 presidential election.

Somewhat incongruously, in the same year that Rose and her husband threw themselves into socialist politics, the pair also moved to their own private island – a three-acre wedding present from Graham’s mother, just off Stamford, Connecticut, just north of New York.

Their list of friends – many of whom visited them on the island – reads like a veritable Who’s Who of US radical politics: ‘anarchist firebrand Emma Goldman, birth control pioneer Margaret Sanger, lawyer Clarence Darrow, “Wobbly” leader Big Bill Haywood, editor Max Eastman, labour crusader and socialist Eugene Debs, and writers Jack London, Upton Sinclair, W.E.B. Du Bois, Lincoln Steffens and John Reed.’ Not to mention Charlotte Perkins-Gilman and Elizabeth Gurley Flynn. The many side stories featuring this galaxy of stars are one of the book’s central joys.

As an activist, Rose rapidly outshone Graham – a source of future tension in their relationship – finding her feet as a rousing speaker who could bring audiences to tears. On one occasion, Hochschild writes, ‘she filled [a] hall in Richmond, Virginia, for three hours, and people wouldn’t leave even when the lights were turned out.’

She was also heavily involved in supporting the era’s numerous strikes, including a May 1912 waiters' strike involving some 50 New York hotels and restaurants.

At the sound of a whistle, 100 waiters noiselessly departed one of the city’s most elegant hotels: ‘Guests waited in vain while sautés cooled and salads withered and wine grew warm. A strike was on’, the Evening World reported.

Rose also became involved with both feminist and anti-racist campaigning, defying the law by distributing information about birth control at public rallies and speaking out about racial equality on one of her southern speaking tours. However, it was the First World War that eventually drove a decisive wedge between Rose and her husband.

Having ‘with some effort’ convinced herself that the war was justified, Rose quit the Socialist Party in July 1917, but rejoined it in January 1918 ‘in the midst of the biggest crackdown on left-wing politics that the [US] had ever seen’. Graham remained resolutely in favour of the war, a drift to the right from which he would never return.

His uncle had recently called for anti-war legislators to be shot. Now Rose was on the road again, speaking out against the draft and the myth ‘that this war is being fought to make the world safe for democracy’.

On 22 March 1918, Rose was arrested under the Espionage Act. The legal foundation of the government’s assault on dissent, the Espionage Act made it a felony to ‘cause insubordination, disloyalty, mutiny or refusal of duty in the military or naval forces of the United States’. Rose was subsequently sentenced to 10 years in prison.

Much to her frustration, class privilege intervened to prevent her from being jailed, but her example spurred her friend Eugene Debs to also speak out against the war. Unlike Rose, Debs was jailed. In the 1920 presidental election, Debs received 3.4 percent of the vote (from his prison cell) as the Socialist Party’s candidate.

As one would expect from Hochschild, who has produced a string of similarly wonderful histories over the past 30 years, this is a marvellously-written and highly-evocative account of people who stood up to be counted in a just cause, often at great personal cost.

In many of those books, Hochschild uses individuals’ stories to bring to life a broader context, such as the the movement to end the slave trade or the Spanish Civil War.

Here, it felt as though the pattern was at least partially reversed, with the broader context being deployed to bring into focus a single central relationship: Rose and Graham’s marriage.

A fascinating account of the glories and the perils of activism and relationships across the class divide, this is public history at its very best.