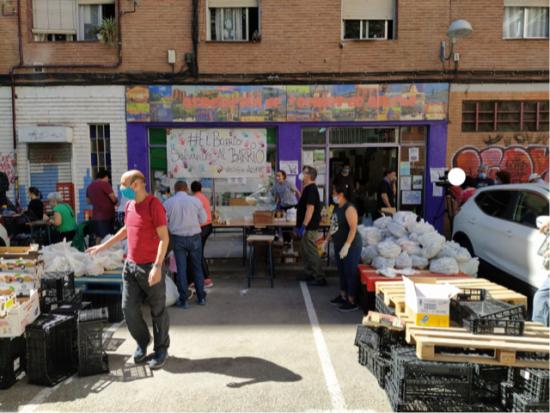 A view of the pandemic from Madrid

It is becoming increasingly clear that those who have the most to lose from COVID-19 have been placed at the bottom of the list of priorities in most countries.

“It’s shocking how many people are suddenly out of a job and are (therefore) embarrassed to ask for a little help,” says one of the volunteers helping register people on the Association’s database.

Spain holds a special position for epidemiologists: one of the first European countries to deal with the coronavirus on a national scale but not the first. It had time to prepare but was still subject to a massive systemic shock. No part of Spain represents this fact better than the capital, Madrid. While it would be very interesting to do a comparative study of each autonomous community in this country with their different politics, administration and societal structure, the case of Madrid brings to light what happens when the people in charge of protecting the citizenry fail to do so and those of lower socioeconomic standing need to step up to fill the gap.

Madrid has been under right-wing rule for over thirty years, with a brief intermission thanks to the left-wing “Unidas Podemos” movement which gave Madrid a progressive city administration that lasted four years. However, the right is now back in power, at both a community and city of Madrid level, thanks to a coalition of the conservative “Popular Party”, the centre-right “Citizens” and the far-right “Vox”. They are the ones dealing with the pandemic at a regional level, or rather, dismally failing to do so.

While other municipalities like Barcelona ask the government for stricter measures the administration of Madrid asks to be moved to the lighter “Phase 1” where, among other things, the lockdown would receive a considerable downgrade.

While the central government distributes medical resources to each community according to their needs, Madrid calls for an open market where one can buy as many resources as one can afford (ignoring those communities which are not national economic powerhouses).

While thousands of Madrileños flee the capital into Castile and León and Castile La Mancha (regions with a much higher than average population age), possibly bringing the virus with them, Madrid approves only the lightest of road control measures in order to “avoid stifling transport of goods”.

Internally Madrid, though it is certainly not the only administration to do so, prioritises the wellbeing of medium-to-large companies over the wellbeing of everybody else: unemployed workers, small local businesses, families with children to take care of (schools have been closed for the past two months) and especially those that were already struggling before the pandemic hit.

Whether it’s legal, financial or even material help, if your company (should you possess one) isn’t large enough to appear on the administration’s radar, then get ready to deal with a considerable amount of red tape designed to prevent people from actually using the services promised to them. Not only is the complexity and extent of said red tape excessive, for most ex-employees the documents and certification necessary to accredit their situation are impossible to acquire.

However, there exists an alternative. Provided not by the administration but by everyday citizens, many neighbourhood projects have sprung up all over Madrid’s districts looking to improve the lifes and alleviate the issues of people in need.

Over 50 neighbourhood organisations and associations are on the front line, distributing food to those who need it. At the Aluche Neighbourhood Association (AVA) alone more than eight hundred families turn up each week to get a single bag of food and hygiene items.

Elsewhere the “Despensa Solidaria” in Vallekas is helping close to five hundred families fight food poverty while the EKO in Carabanchel, an abandoned old fish market where many social collectives squat and operate from, is coordinating food acquisition for different associations all over Madrid.

For five weeks, since the first lockdown measures were put in place by the central government, the AVA has been at work organising this temporary food bank with over a hundred volunteers involved in the different processes. From buying food to transporting donations, from making inventories to packaging, from physically distributing each bag to managing the growing list of families in need, all the work is done by neighbourhood volunteers, some currently jobless, people not necessarily part of the AVA before the pandemic.

A few days ago big new outlets took notice of the ongoing operation and started interviewing spokespeople from the AVA and waiting donees. As often happens, they misconstrued the message and objectives of the association in order to suit their political narrative.

The main points that have been ignored over and over again are the association’s demands of the Madrid administration: they ask not for more food or money but for the administration to take care of those legally under its responsibility, the people of Madrid. It could do so in a more immediate manner via subsidies to small companies, direct economic help to those in need, extra funding to specific social programs, while long-term it could pass employment reforms to prevent such situations as these from being repeated and institute a package of taxes internationally known as the “Robin Hood Tax”, aimed at speculative financial transactions.

For the time being it appears that Madrid’s citizens are on their own, especially after taking into account the attitude demonstrated by those living in the more affluent neighbourhoods such as the Barrio de Salamanca. Such neighbourhoods have several ongoing demonstrations against the lockdown and any other measures they consider overly “restrictive”. Of course, these neighbourhoods didn’t get to enjoy the army being sent in to attempt to enforce quarantine as it was in other, less wealthy parts of Madrid. Nor have they lost most of their income as a result of the mass firings and reduction in movement suffered during the lockdown.

Alas, while those in Madrid continue to live such Dickensian lives, it will remain a right-wing stronghold where the poor cannot trust the administration to act in their best interests and must instead rely on their fellow neighbours.

The way forward, as it always appears to be, is mutual aid. As we say here, only neighbours can save neighbours.