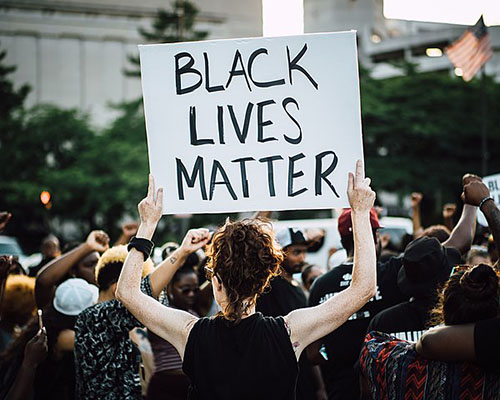 For all its horrors, the coronavirus pandemic has created a once-in-a-lifetime opportunity for a shift to a more equitable, socially just, climate-resilient and zero-carbon world – if we can grasp it. The current wave of protests in support of #BlackLivesMatter – and the groundwork that campaigners have laid for them over the past six years – provide crucial pointers as to how we might do this.

In a highly prescient piece for the media platform Waging Nonviolence, published on 16 March, the activist and author Paul Engler wrote that: ‘There are times in history when sudden events – natural disasters, economic collapses, pandemics, wars, famines – change everything. They change politics, they change economics and they change public opinion in drastic ways.’ Those who study social movement call such times ‘trigger events’ and during them ‘things that were previously unimaginable quickly become reality, as the social and political map is remade’.

COVID-19, he noted, ‘is by far the biggest trigger event of our generation. It is a combination of natural disaster and economic collapse happening at the same time.’

Subsequent events have certainly borne out this assessment.

The ‘impossible’ has happened

Thus Ireland has nationalised its healthcare system for the duration of the coronavirus crisis, Portugal has temporarily granted all migrants and asylum seekers full citizenship rights, giving them full access to the country’s healthcare system, and many workers in the US temporarily gained new sick leave rights as part of the federal government’s response to the pandemic.

And here in the UK, offers of safe accommodation were rapidly made to 90% of rough sleepers – some 6,000 of whom were brought in off the streets.

And a Tory government – led by the same party that had just spent a decade hammering the poorest and most vulnerable members of society with its ideologically-driven policies of cuts and ‘austerity’ – has found itself paying 80% of the wages of a quarter of the British workforce.

Literally overnight, scores of millions of people have turned their lives upside down – often at considerable sacrifice to themselves – to be part of a mass collective effort for the common good. And over 2,000 mutual support groups have sprung up across the UK enabling people to offer solidarity and assistance to one another.

As Rebecca Solnit noted: ‘lots of things we were assured were impossible… have come to pass’, and this real-life proof is surely worth a thousand theoretical demonstrations.

But this crisis has also thrown a harsh spotlight on the many injustices that were part of ‘business as usual’ – from domestic violence and the ‘hostile environment’ to the rise in food bank use and the huge racial disparities in our healthcare system – even as it has also thrown up new opportunities for change.

On 9 June, BP’s CEO Bernard Looney declared that: ‘The oil price has plunged well below the level we need to turn a profit. We are spending much, much more than we make – I am talking millions of dollars, every day.’

And the polls suggest that many people are hungry for change.

For example, a 20 – 24 May poll by Ipsos Mori found majorities in 16 major countries (including the UK) ‘expect their government to make protection of the environment a priority when planning a recovery from the coronavirus pandemic’.

In other recent polls 81% of the British public said that ‘companies that operate in tax avoiding schemes should not receive government bailouts’, while 76% said that carers ‘should get paid at least the living wage of £9.30 per hour (£10.75 in London)’.

But even ignoring the fact that the pandemic itself is far from over – and in the UK, as elsewhere, a ‘second wave’ remains a very real possibility – this is also a moment of great danger.

According to the New Economics Foundation ‘[c]urrent forecasts suggest the economy could shrink by at least 13% in 2020, making this the worst recession to hit the UK in 300 years’. And without drastic action this will ‘most likely lead to significant job losses, worsen the health and wellbeing of many households and exacerbate existing inequalities’.

Around the world, recovery packages totalling perhaps as much as $20tn are anticipated. Yet, as Naomi Klein has noted: ‘If there is one thing that history teaches it’s that moments of shock are profoundly volatile. We either lose a whole lot of ground, get fleeced by elites and pay the price for decades or we win progressive victories that seemed impossible just a few weeks earlier.

‘This is no time to lose our nerve. The future will be determined by whoever is willing to fight harder for the ideas they have lying around.’

From rent freezes and vaccines for all to universal basic income and a green new deal, progressives have no shortage of good ideas ‘lying around’.

The question is, can we make some of them reality?

Unsurprisingly, there are no simple formulas. However, we offer these suggestions:

1. We maximise our chances of success if we focus on building powerful social movements (as opposed to getting particular political parties or leaders elected).

With an 80-strong Tory majority, Keir Starmer at the helm of the Labour Party and the next general election not scheduled to take place until 2024, hopes of winning radical policies through the ballot box have receded beyond the horizon.

But history shows us that it is possible for social movements to win major victories in even the least promising circumstances. Thus, in the 1980s US campaigners were able to fundamentally shift AIDS policies, notwithstanding two hostile Republican administrations. And it was under Reagan not Carter that campaigners were able to get the US Congress to impose sanctions on apartheid South Africa.

In his Climate Resistance Handbook, Daniel Hunter explains how such things are possible: ‘A balloon floats in the wind. If you blow on it, it can be pushed one way or the other. It follows the wind, like politicians who can change their opinions and stances easily. But politicians are tied to a rock, If we swat at them, they may sway to the left or the right. But tied down, they can only go so far.

Instead of batting at them, we should move the rock: people’s activated social values. Depending on our government, the string might be longer or shorter. But politicians know they can only be pushed so far one way or the other. If they absolutely violate social norms, they are in trouble.’

We can move that rock by building campaigns that encourage people to act on their values.

2. We maximise our chances of success if we articulate a compelling vision, build effective structures and act strategically.

Engler notes that ‘a common story, strategy and structure can allow a mass movement to legitimate political demands that might otherwise be deemed impractical or undesirable, and to compel public officials to adopt them. The function of mass movements is not to hash out the instrumental details of proposals… Rather, it is to build momentum for popular, symbolically-resonant demands that would form the backbone of a progressive national response… A movement can advance such demands with campaigns of distributed actions.’

We can see the fruits of just such an approach playing out in front of our eyes in the dramatic and inspiring protests for racial justice that have swept the US in the last few weeks.

As organiser Nicole Carty explained in a recent interview for Waging Nonviolence: ‘By developing its bold policy platform in 2016, called the Vision for Black Lives, the Movement for Black Lives [a coalition of groups, including the Black Lives Matter network] deftly articulated alternatives to be taken up during the next crisis. Their call for divesting from police — and reallocating that money towards meeting people’s basic needs — helped mainstream the demand to defund police that is now at the forefront of protests across the [US]’.

In Minneapolis, where, according to Carty, local activists have ‘been investing in their community and whole movement ecosystem, to make it possible to move clearly with this moment’, the City Council has now voted to dismantle the city’s police department and (in the words of one Council member) ‘create a system of public safety that works for everybody’. This in turn should help make the case for similar transformations in states across the country.

3. We maximise our chances of success if we maintain nonviolent discipline.

Social movements are messy things – and there are few examples of perfectly nonviolent ones.

‘A contest of escalating violence is a contest we are doomed to loose. A contest in which numbers, commitment, and increasingly militant nonviolent activism confronts state power is a contest we can win’ – though there are, of course, no guarantees.

In a recent interview for Double Down Media, Gary Younge states, correctly, that ‘the black American middle class owes its existence to the uprisings of the 60s, which started as peaceful civil rights protests led by the church and ended in the late 60s with pitch battles and tanks in the streets.’ But it is also true, as George Lakey has noted, that ‘the mass civil rights movement [of this period] lost much of its power precisely at the time when it lost its consensus on nonviolent struggle as the basis for mass action’.

The job of those of us who are committed to nonviolence as a method of social change – whether on ethical or strategic grounds – is to build effective nonviolent movements, not to lecture oppressed people about violence.

Even the first wave isn’t over yet

Finally, we can’t forget the fact that we are still in the midst of a deadly global pandemic.

For one thing, this means that there are potentially deadly consequences to mass protest. Indeed, one scientist sympathetic to the US #BlackLivesMatter protests – which have involved hundreds of thousands of people – has produced ‘a highly speculative ‘more than 50 and less 500’ estimate for the number of eventual deaths for each day of protests’ there. The protests may well still be justifiable – eg on public health grounds alone, racism being a major public health crisis in its own right – but they still come at a cost.

And it should also focus our minds on the fact that, whatever happens here in the UK, the only morally justifiable response to our current crisis is an internationalist one.

Paul Engler’s ‘Coronavirus is a historic trigger event — and it needs a movement to respond’: tinyurl.com/peacenews3501

350.org’s five Principles for a #JustRecovery from COVID-19 can be found here: 350.org/just-recovery

A new project, the Progressive International is trying ‘to unite, organise, and mobilise progressive forces behind a shared vision of a world transformed’: progressive.international

The US-based group Momentum (not to be confused with the UK group of the same name) aims to give ‘grassroots organisers the tools to build massive, decentralised social movements that aim to shift the terrain under policymakers feet. You can find their online resources here: tinyurl.com/peacenews3503