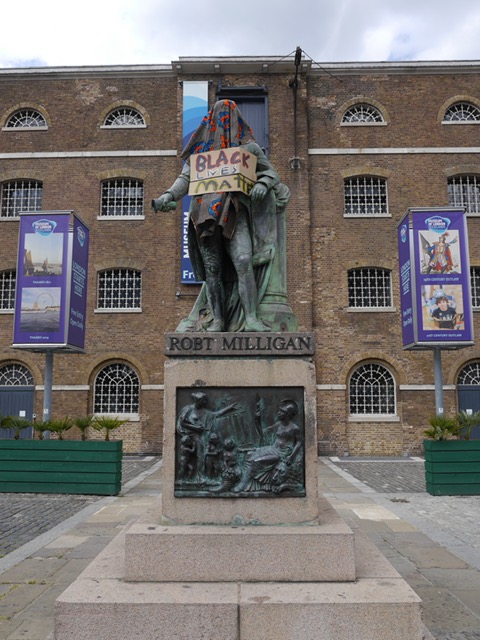 It’s hard to keep up when the world lurches from pandemic to racial justice uprising seemingly overnight. After months of living in a quarantine pressure cooker, amidst a global pandemic that’s thrown millions out of work, exposed the vicious inequities of our current capitalist system and killed hundreds of thousands, masses of people hit a breaking point.

Fuelled by their righteous rage about the videotaped killing of George Floyd, people have flooded the streets and taken the fight against structural racism and police violence to new heights. Protests, marches, memorials — fierce and creative — have radiated out from Minneapolis, and across the world, from Mexico City to Copenhagen to East Jerusalem and beyond.

And in their wake, with dizzying speed, we’re seeing the range of politically feasible ideas shift in real time before our eyes. Here’s just a few of the recent victories:

The repeal of statute 50-a in New York State will now require law enforcement to share police misconduct records with the public.
A large planned increase for the Los Angeles Police Department’s budget was cancelled and the mayor pledged to cut its funding by more than $150 million. Minneapolis banned the use of choke holds, as did San Diego.

There’s also a growing list of more intangible wins, including acknowledgement by more white and non-black people of the virus of anti-black racism and the role policing plays in the United States and other countries in maintaining white supremacy.

‘Defund the Police!’ has moved from fringe idea to nearly law of the land so fast, pundits have motion sickness. It shows what can happen when progressive ideas are backed by true people power …So how has all of this moved so quickly?

One answer lies in the massive scale of mobilisation — protests in all 50 U.S. states, including many small, predominately-white rural communities, as well as many cities around the world. Black-led organisations and networks were already in place and ready to lead. Since the formation of Black Lives Matter (BLM) in 2013, this female-led movement has continued to emphasise the development of young leaders and to innovate strategy and tactics.

After its first national in-person action in Ferguson in 2014 following the killing of Michael Brown, the movement has honed its campaigning strategy using nonviolent direct action. It drew on the tradition of Black freedom movement and embraced the intersectionality of Black lives, while pushing for bold systemic changes to end racialised oppression.

Another factor is the sheer fierceness of the response — the willingness to take to the streets in spite of, or because of, quarantine.

A less obvious piece of the answer is that these actions have been built — consciously or unconsciously — on a supercharged set of principles for making beautiful trouble.

For those who are committed to continuing the struggle, and potentially escalating or innovating tactics to increase effectiveness, it can be helpful to take a deeper look at some of the principles and theories behind what is being done on the frontlines of this growing insurrection in defence of Black lives.

As Frederick Douglass famously noted, ‘Power concedes nothing without a demand. It never did, and it never will.’ In this moment, demands have coalesced around defunding the police and reimagining community security for a world that will have moved beyond anti-Black racism and other oppressions.

But what has allowed these protests to press those demands so effectively? Beyond their scale and breadth, it’s their staying power and intensity; they are un-permitted, ongoing and willing to disrupt business-as-usual. It’s this combination that has allowed activists in the streets to build power.

Use the power of ritual

Rituals can connect us to the deepest truths of why politics matters. In a crisis, ritualised expression can not only help people cope, band together and grieve losses, but can also make collective meaning from traumatic events, and build new stories for our path ahead.

The fence surrounding the White House in Washington DC became a focal point, a shrine, for creative statements and ritualised decoration, embodying demands and visions of the people.

Similarly the fence surrounding the Silver Lake Reservoir in Los Angeles became a memorial to those killed by police violence, as artists tied strips of fabric to spell out the names of those murdered.

Even as direct action is a key component of BLM activism, there is also an intentional emphasis on joy and healing, and building a beautiful struggle that is not depleting.

Through engagement with arts and culture in programmes like Black Joy Sundays, BLM has intentionally created a space for Black activists to focus on themselves and positive expression.

In a modern take on the importance of music in protest movements, Korean pop music fans have shown their solidarity with BLM by flooding a police reporting line with K-pop fan videos — thus jamming the app, disrupting the flow of racist and pro-police posts and forcing them to take the app down.

Needlessly endangering the safety of you or the people around you hurts the movement.

The emphasis on healing justice and embracing the positives in Movement for Black Lives grew out of the need to fight systemic racist oppression and — at the same time — uplift Black lives and resilience. This emphasis on infusing healing and humanity into activist campaigns is a gift to the broader movement for social justice.

Many injustices are invisible to the mainstream. When you bring these wrongs into full view, you change the game, making the need to take action palpable.

The Illuminator crew projected martyred faces onto New York City skyscrapers, lighting them up with images of Breonna Taylor, George Floyd and demands to defund the Minneapolis Police Department.

In many places, toppling statues has become the iconic statement, literally knocking colonial rulers off their historical pedestals. In Bristol, England a crowd of citizens felled a statue of their slave-trading city official, Edward Colston, and unceremoniously dumped him in the river. Native women in Minneapolis pulled down a statue of Christopher Colombus.

Do your research
Whether you’re scouting an action location, doing a power analysis of your political target, or reviewing previous events — don’t skip the research.

Documentation has been essential to the success of BLM. Activists have been working to systematically track the all-too-widespread occurrences of police brutality in a crowdsourced spreadsheet.

For people who benefit from white privilege, doing research into who is already leading the struggle locally, and following the leadership of those most impacted, is crucial, rather than trying to organise and ‘save the day’ out of nowhere.

The unfolding insurrection has been a master-class in creative protest. The hope here is that by reflecting on the extraordinary creativity of the recent BLM uprising — through the lens of generations of social movement best-practices — activists will find ways to keep our eyes on the prize, as we continue to escalate strategically and build power

Even the rarely optimistic Ta-Nehisi Coates has said, “I can’t believe I’m gonna say this, but I see hope. I see progress right now.”

This is an edited version of a piece that originally appeared on Waging Nonviolence: wagingnonviolence.org. Beautiful Trouble’s wide range of activist resources can be found online here: beautifultrouble.org/all-modules