James Dunkerley, Crusoe and His Consequences 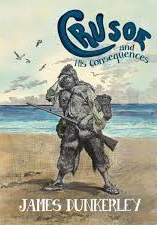 This is a rich and compelling examination of Daniel Defoe’s 1719 literary classic Robinson Crusoe - the story of a shipwrecked man who survives on a desert island for 28 years, two months and 19 days.

Read in turn as a realistic adventure story, a spiritual pilgrimage and a parable about the rise of the economic capitalist, Crusoe has become ‘one of the most influential [books] in and beyond the Western world… exercising a profound impact not just on literature but also on how succeeding generations debated the nature of individual solitude, work, colonial and racial relations, economics, dreams,  "providence" and human relations with the rest of the animal world.’

Dunkerley tackles this gargantuan task in two sections. The first provides a detailed summary of the story, combining analysis and key extracts from the original text - a valuable read even for those already familiar with the book. This is followed by a thoroughly-researched overview of the work’s genesis, critical reception, various literary interpretations and (as he humorously puts it: ‘please take a deep breath’)  philosophical readings.  The second section focuses on Defoe himself and the world he lived in. Interestingly, his own public and private lives were associated with capitalism, debt and, much like his hero, adventure.

From being mercilessly satirised during Defoe’s lifetime to obtaining the status of major art work by the 19th century, Crusoe even engendered its very own genre: the Robinsade, otherwise known as the desert island story.

One of its most lasting legacies is how Crusoe’s adventures have come to symbolize the rise of the economic individual. As literary critic Ian Watt has observed, Crusoe’s survival on the island is marked by ‘economic motive, innate reverence for book-keeping and the law of contract’. In this way, Crusoe fully embodies the archetype of Homo Economicus (‘economic man’) assumed by mainstream (‘neo-classical’) economic theory.

Karl Marx challenged these ideas by contending that Crusoe wasn’t relevant for ‘realist economic thinking.’ According to him, the Crusoe myth effectively naturalises the historical process when, in fact, all individuals are products of society, not nature. Nonetheless, as economist Matthew Watson notes, the fictional depiction of Crusoe’s individualist enterprise on the island still inspires economics students to see markets as ‘pristine economic institutions.’

In an even more interesting, yet underdeveloped, paragraph Dunkerley considers two of the novel’s most conspicuous absences : it ‘expunged sex and women’ and ‘omitted colonialism’ as if Crusoe just happened to find himself on a desert island through magical extraction. Throughout his journal, Crusoe declares himself king of his island, a fact that led James Joyce to read Crusoe as ‘the true prototype of the British colonist.’

Whether or not you've read Defoe's seminal text, I would recommend this engaging exploration of the main debates around Defoe's work. While it offers no revelatory analysis of the novel itself, it will appeal to readers who want to understand why, as Marx put it, 'political economics are fond of Robinson Crusoe' and how a literary classic continues to pervade our ways of thinking about and seeing the world.