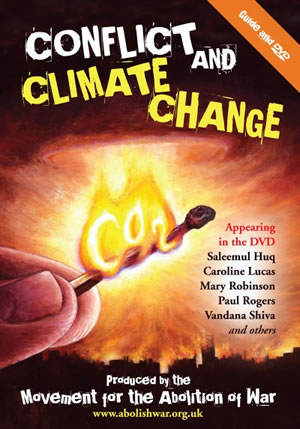 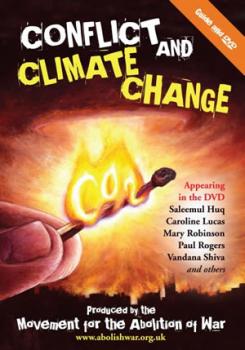 Although it’s only a small booklet accompanying a very short DVD, produced on a low budget, and it would be easy to overlook it, this new resource from the Movement for the Abolition of War (MAW) is more important than it at first looks. After all, it deals with possibly the biggest global concern for nonviolent revolutionaries today: how war and climate change are inextricably linked and why we need to work on them as one issue.

The small size is key to the beauty of the project. With very little space to make its case and move us to action, the narrative has to be very clear. The argument moves from the evidence for climate change, through an analysis of how conflict and climate change are linked and why militarism is not the answer, to hope for the future.

The narrative builds gently and neatly from discussing the obvious reality of climate change now, to proposing that the solution lies in a radical economic and cultural shift. The simple structure and the lucidity of the argument makes this obvious and palatable – and easy for activists to take away and use.

The film starts in a deceptively simple fashion, affirming the evidence for climate change – just in case anyone still doubts that it’s really happening – pointing to the effects on people, nonhuman animals, and the land. Then key witnesses take these observations to the next level, pointing out that poor countries like Bangladesh, and poorer people whose livelihoods come from the land, are more vulnerable to increasingly frequent extreme weather events.

Vandana Shiva points the finger squarely at industrial agriculture for destabilising climate and food systems, immediately opening up space for a radical perspective that makes any notion of ‘business as usual’ solutions impossible.

Next up, speakers introduce the idea that climate change is already at the root cause of current conflicts, pointing out that the war in Darfur and the uprising in Syria both followed years of drought. In the former case, tensions and then conflict erupted between ethnic groups competing for usable land. In the latter case, scarcity coincided with an end to government fuel subsidies, leading to huge price hikes, then mass protests brutally suppressed. In areas already experiencing war, climate change is exacerbating the situation.

The scale of the problem – 250 million people displaced by 2050 – makes it obvious that there’s no military solution. As Paul Rogers puts it: they treat the symptoms and not the causes. So what is the answer?

This is where the radical framing of the argument early on really bears fruit – because the film can move nicely to explaining that simply moving away from military spending is not enough, and that we’ve got to re-orient our economic structures to be people- and planet-focused, in order to be truly sustainable. That means investing in safe (ie not nuclear!) renewable energy and ending extractive fossil fuel-based energy production.

The scale of the issue also speaks to the urgency involved: once you’ve heard what they have to say you’ll be inspired to take action, and that’s what the booklet is for. Moreover, it’s packed with resources, making it a gentle and useful resource for new activists, as well as a really practical support, both for climate activists wanting to expand their range to include war and peace issues, and peace activists ready to tackle climate change.

The section on ‘what we can do’ follows a section on ‘signs of hope’ – a summary of international governmental agreements (which, arguably, some might feel is a rather too hopeful!).

This format is something of a breakthrough, answering a challenge that campaigners have long struggled with. Having established a framework of optimism, the authors manage to make action by small groups and individuals feel worthwhile. While small acts may not by themselves bring about the big quick changes, they will help to create a sustainable, ecologically-minded culture, which in turn makes a sustainable basis for persuading governments to commit to and abide by international agreements – a virtuous circle of change, creating a spiral of abundance.

Unlike the film, the booklet is a bit of a disappointment on what we can do, restricting itself to talking vaguely about how small groups can lobby for change. I notice, too that it gives plenty of space to the great work being done by Christian faith groups, but there’s no acknowledgement that Muslims, Jews and others are also working within their faith communities on these issues (eg check out the Islamic ecology campaign WIN at www.wisdominnature.org.uk).

It’s very rare to be able to genuinely recommend a resource for use with almost any audience, at any stage on their activist journey. Because the presentation is so accessible, this film can be used as a teaching aid with children, or a discussion starter with new activists. Yet because it is underpinned by a radical analysis and clearly explains why we need a radical system change, it’s a useful tool for experienced activists too.

For a long time a lot of us have been wondering how to make the links between climate change, conflict and (anti-)militarism, in a way that will encourage and enable the two movements to come together.

This easy to use, beautifully accessible little kit has given me hope that at last this will happen – as well as some ideas of how to do it!