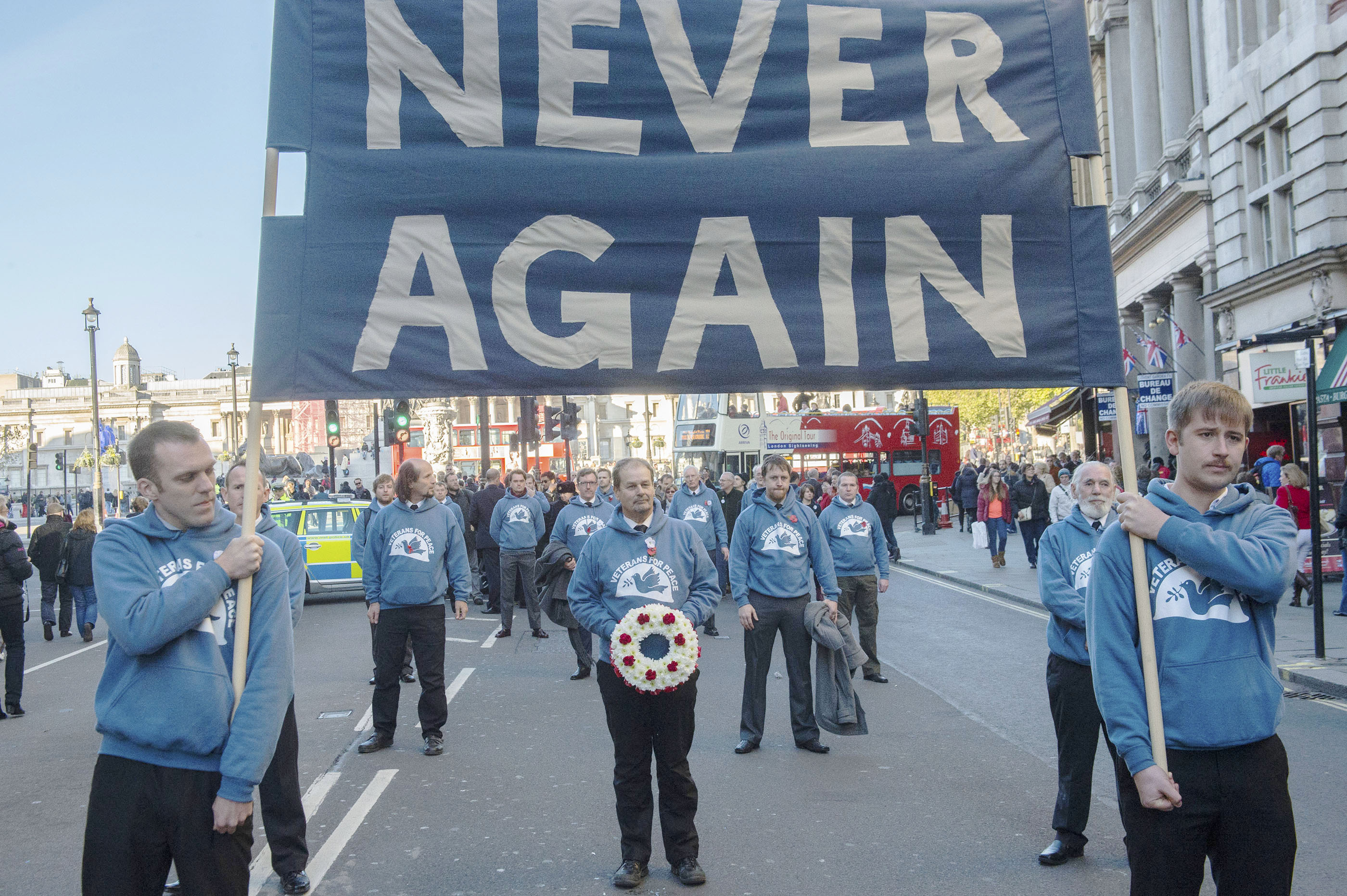 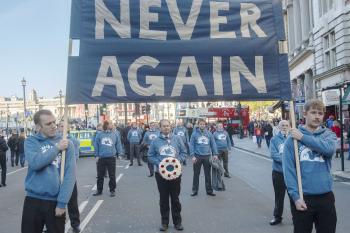 As a child I was captivated by the sombre parades of Remembrance Sunday. The soldiers in their greatcoats, the veterans wearing their medals, and ‘The Last Post’, all played a part in recruiting me into the army.

Since I left the army, the weeks leading up to Remembrance Sunday have become hard for me to endure. The public relations campaign waged each year by the Royal British Legion hides the brutality and stupidity of warfare.

Diamanté poppies, girl bands and children dressed in ‘Future Soldier’ T-shirts are all deployed to attract the unthinking into participating in a glorification of war and the military. There is a distinct lack of remembrance.  I am not alone among veterans in thinking this.

Veterans for Peace UK was formed in mid-2011. We have attracted veterans of all three services, ranging in experience from D-Day to Helmand province, Afghanistan.

Our aim is to advance the cause of world peace through nonviolent action. We speak in schools to counter the propaganda of military recruiters, stand in solidarity with military resisters like Michael Lyons and Chelsea Manning, fast in solidarity with the men held in Guantánamo Bay, hold public events to expose the true nature of warfare by telling our own stories, and protest in the street.

This year, on Remembrance Sunday, 10 November, we walked (no marching) to the Cenotaph under the banner ‘Never Again’. We decided not to wear our medals or berets. Among the 18 veterans who attended were men who had served in the Second World War, South-East Asia, Northern Ireland, Oman, Macedonia, Afghanistan and Iraq.

The message on the back of our tops read ‘War is Organised Murder’, a quote from Harry Patch, who was the last survivor of the Western Front in the First World War when he died in 2009. We were followed by around 80 supporters.

The response from bystanders was initially confused and then, as the penny dropped, mostly positive.

As we neared the Cenotaph we were stopped by the police; we had not informed them of our intentions. A negotiation between the police and myself ended with an agreement to allow the veterans and our bugler to approach the Cenotaph.

The tension built as we waited for the Salvation Army to finish their ceremony.

We walked into the enclosure surrounding the Cenotaph and lined up facing it.

D-Day veteran Jim Radford sang the song ‘1916’, by Lemmy Kilmister. Afghanistan veteran John Boulton read the poem, ‘Suicide in the Trenches’, by Siegfried Sassoon. A wreath of mostly white poppies was then laid by Northern Ireland veteran John Bourton. ‘The Last Post’ was played, after which there was a minute of silence during which we tried to remember all victims of war.

It was a sombre and moving event which took courage to participate in. Next year, we hope to have many more veterans committed to peace walking with us to the Cenotaph.

We extend our invitation to former enemies who are currently excluded from the ‘official’ state parade.

Ben Griffin is a coordinator with Veterans for Peace UK. He served in the Parachute regiment and the SAS in Northern Ireland, Macedonia, Afghanistan and Iraq.

Whatever happened to Turkey’s peace process?