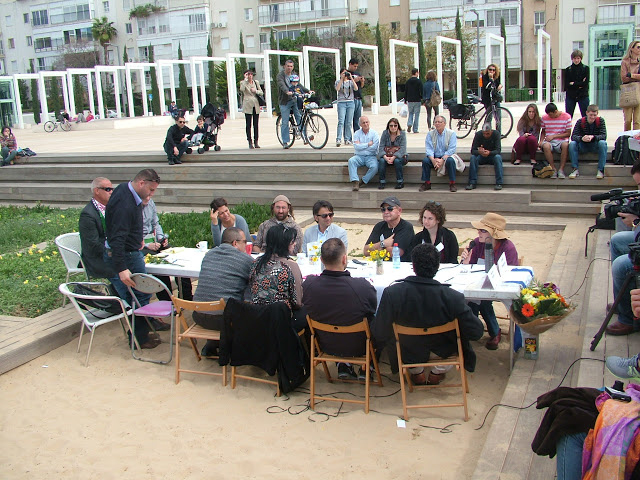 Minds of Peace at work

31 Dec 2013 News by David Polden
Palestinians and Israelis at the negotiating table in a town square.
Photo: Minds of Peace

Alongside official peace talks between Israeli and Palestinian negotiators which never seem to get anywhere, a group called ‘Minds of Peace’ has for over a year been carrying out what it describes as a ‘campaign of grassroots Israeli-Palestinian negotiations on the streets and public squares of Jerusalem’ and other cities.

These negotiations, involving Israelis and Palestinians who are not professional diplomats, aim ‘to boost and promote the faltering official negotiations’.

By the weekend of 24-25 October, the talks had reached their 22nd session, held in Hamashbir Plaza in Jerusalem. Six Palestinians and six Israelis – including the ex-pilot who had led the raid on the Osirak Iraqi nuclear reactor, and a Palestinian ex-political prisoner – sat round a table surrounded by a fence and police.

As usual the space outside the fence was soon filled by right-wing flag-waving Israelis who tried to disrupt the negotiations by whistling and shouting slogans such as, ‘We don’t negotiate with terrorists!’ (On previous occasions actual violence had been used.) The demonstrators were invited to join the talks but preferred to stand outside and shout.

Not everyone was opposed. A passing Orthodox Jew was recorded commenting: ‘Through discussion it is possible to achieve all the good in the world.’

Whatever happened to Turkey’s peace process?