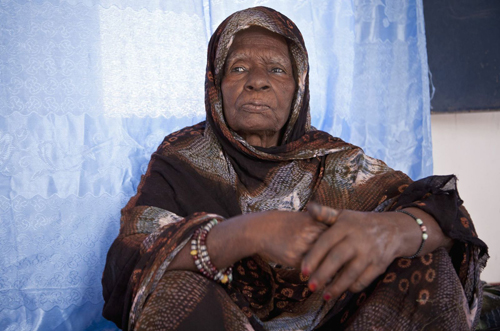 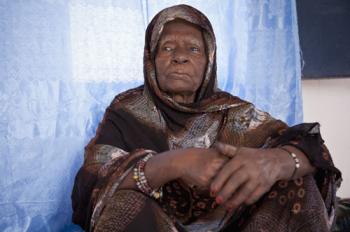 Across the other side of Algeria from where the Amenas gas installation was hijacked by militia (armed from former Libyan leader Muammar Gaddafi’s liberated weapon stores), a very different Islamic resistance movement has been lodged for 35 years.

Largely unnoticed in Western consciousness, their culture draws on moderate Islam, Bedouin traditions and 1960s African socialism. One of their weapons of choice is poetry.

An estimated 140,000 people live in the refugee camps near Tindouf, partly reliant on UN food aid and overseas remittances. They come from Western Sahara, ‘Africa’s last colony’, and represent over half the Sahrawi population, exiled after Morocco invaded their homeland in 1975, the year that Spain withdrew.

Like many Bedouin and oral cultures, poetry has played an important role in Western Sahara. Traditionally, according to a Sahrawi archivist, poetry had many uses, both practical and cultural. Within praise of the landscape, there would be knowledge about good land for cattle and sources of water. Poetry could express spiritual practices, tell stories, mark identity or pass on news. Its performance is connected with the hospitality culture: the slow tea rituals in four-door camel-skin tents, open at all times to passing guests.

Thus it is somewhat of a surprise when I ask my translator to explain the poem 80-year-old Al Hadra has just performed for me, and hear that it is about the BMB armoured tank.

Just as, to an impressive degree, the people of Western Sahara overcame tribalism and dismantled a colonial government to join together (with the Polisario Front as ‘the sole legitimate authority of the Saharan people’), so has Sahrawi poetry adapted to changing times.

New subject matter was told in traditional forms. Poets publicised news of the guerrilla desert war against the US-armed Moroccan forces in the ‘language that everyone knows’. 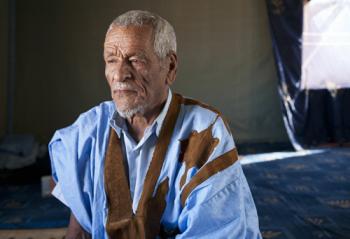 Al Hadra’s poem falls very much into this tradition. As a young woman who could not read or write, she learned poetry and songs by listening to them and attending moonlight recitals. In the pre-war period, she would chant poems that mainly ‘celebrated female beauty’ but after the war, ‘there was only one focus: to inspire and to encourage, to praise an army which rescued people who were in danger, at great risk to themselves’. Her BMB poem spread news that the army had captured enemy tanks.

Beyibouh is a fourth-generation poet from a camel-herding nomadic family. For him, ‘the time of fighting and liberation is the time of poetry’s flourishing’. He believes that one must study poetry until it becomes ‘part of the person’, and listening to him, while sitting as a guest on the carpeted floor of his family’s tent, with the clatter of tea cups on metal trays and the laughter of those around him, it is hard to tell the exact moment when he moves from talking to reciting.

Beyibouh’s poetry is a kind of refined talk. His best-known poem from that ‘time of fighting’ is an ode to the Land Rover. Once the only vehicle in the refugee camps, in its ‘hornless’ form (roof removed to mount a gun), the Land Rover became a symbol of the war of independence: a squat, low-lying desert vehicle whose crew of five captured tanks and shot down bomber planes. His poetry is funny, partisan and deeply-loved.

Unlike in some other oral cultures, being a poet in Western Sahara is not necessarily a caste-occupation. ‘Heritage poets’ like Beyibouh still kept cattle, and then there are those who became the first in their family to compose poetry.

One such poet is Ma’aloud Hussein, who learnt poetry from a Malian man he met in the occupied zone before the Moroccan invasion. His latest poems mark the developments in the struggle, which, since the ceasefire in 1991, has been as much led by occupied civil society as by the exiled Polisario leadership. Despite the ethnic and geographical divisions, the rhetoric of solidarity prevails.

Bashiri, a paralysed war veteran, simplified the message for me: ‘The Sahrawi will use all the means that are legal to achieve independence. We will never resort to terrorism but we have a right to our land.’

One such means was Gadaym Izik. This camp in November 2010 was the moment when, according to Noam Chomsky, ‘the Arab Spring began’. (See PN 2528-29; 2552-53.) As many as 12,000 Sahrawi people left Laayoune (the former Spanish capital) to create a desert camp of improvised haima, traditional tents. Morocco imposed a media blackout, the police and army waited and watched, then attacked.

The tents were burnt, the protesters forced out, eleven people were killed and hundreds injured. Following the camp’s eviction, violence spread to the city and was eventually suppressed. 23 people are still held without charge in Sale jail. Hussein’s poem is on the surface a praise of the Gadaym Izik hill itself, yet, as with traditional Sahrawi verse, it contains a coded message: reaffirming Sahrawi unity and desire for independence.

Poetry is an integral part of Sahrawi culture. Its double half-line form, regular rhyme and incremental repetition are typical features of oral poetry. Its changing subject matter, however, shows its continued relevance as ‘the dignity of society’. It is, says Beyibouh, a ‘weapon that poets use to reveal the true face of Morocco. It can cross the berm and fly across the sky. No guard can keep it away and no missile can destroy it.’ (‘The berm’ is Morocco’s 1,500-mile-long defensive wall, which seals off the territories illegally occupied by it from Polisario-controlled areas.)

Poetry did not stop with the 1991 ceasefire and neither did the determination for independence.

Sam Berkson is a poet whose latest collection, Life in Transit, is published by Influx Press. He and photographer Emma Brown were visiting the Tindouf refugee camps with Olive Branch Arts, a British-based drama company who work with Sahrawi young people to create theatre.
www.olivebranch-arts.com