Last week a public poll found that four out of five Scots want to see the Trident nuclear weapons system removed from Scotland. It is hardly surprising that support for the Scrap Trident weekend of protest and action on 13-15 April is mounting at a phenomenal rate. 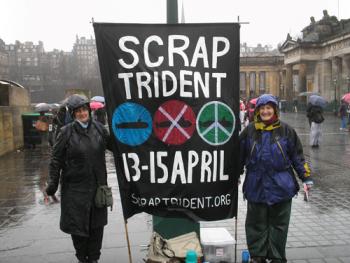 The event has been called by a wide coalition of groups active against nuclear weapons and NATO, and pro-independence campaigns, including Scottish CND, Trident Ploughshares, Stop the War Coalition, Faslane Peace Camp, the Scottish Green Party and the Radical Independence Campaign. In recent weeks, many more have added their names to the list of supporters, with both the Scottish Trade Unions Council and the National Union of Students deciding to officially endorse the event. On 26 April, anti-Trident MSPs are holding a press conference at the Scottish parliament in support of our call for action.

As the independence debate continues to rage in Scotland, Trident is getting unparalleled political and media attention. On 20 March, the Scottish parliament debated the issue of calling for Trident removal prior to (and regardless of) the ‘main gate’ replacement decision tabled for debate in Westminster in 2016. The motion, calling for Westminster to begin exploring Trident’s removal was carried by 71 votes to 16, after a lively debate.

While the motion distinctly lacked ‘teeth’, the debate highlighted the commitment of those in Holyrood who oppose Trident, a clear majority, to keep this issue alive as the defining feature of Scotland’s push for self-determination.

Those objecting to the motion, mainly Labour and Conservative Party MSPs, struggled to portray anything other than a dogmatic commitment to multi-lateralism and a global cynicism as justification for opposing disarmament. Jackie Bailie, the Labour MSP for Faslane, was effectively booed for suggesting that the moral issue in question was the impact on the local economy and not weapons of mass destruction.

Predictable objections aside, the majority of speakers gave passionate arguments for Scotland, as the unwilling host to these weapons, to do something about them and much as we would have liked to see an anti-Trident motion with more substance, the whole debate was a far cry from anything likely to be witnessed in Westminster.

Whilst the Scrap Trident weekend is not pro-independence, the organisers acknowledge the unparalleled opportunity to disarm that independence presents.

We should no longer continue to play host to 200 nuclear warheads and a multitude of nuclear reactors 30 miles from a major city.

For us, this ‘We, the people of Scotland’ argument for disarmament rings true whether we get independence or not, and it is time we stood united against nuclear weapons on the Clyde and the ongoing plans to replace them.

There is a growing feeling in Scotland that we are being presented with a tangible and real chance for disarmament. The politicians are already taking tentative steps but we must mobilise to ensure the anti-Trident will of the Scottish people is present and acknowledged.

We will be marching through Glasgow on Saturday 13 April as a reminder that these weapons keep our cities under constant threat of a nuclear accident.

On Sunday we will hold meetings on the issues connecting to Trident with anti-cuts, human rights, anti-NATO and independence campaigners, along with direct action training.

On Monday 15 April, we will solidify our message by taking nonviolent direct action to shut down the Faslane naval base, where the daily business is preparing for nuclear war, also marking the Global Day of Action on Military Spending.

Join us in calling for Scotland to lead the way in world nuclear disarmament!

Leonna O’Neill is a member of the Scrap Trident Coalition.

Buses have already been arranged from many cities in Scotland and south of the border, check out the website for more details. Accommodation and food will be provided in Glasgow for those wishing to attend from afar. Transport to Faslane on Monday will be in place. Please register for these through registration@scraptrident.org
For more information, to subscribe to the mailing list, to sign Scrap Trident petition or download fliers, posters and the blockading briefing pack, please phone 07511 793 227 or visit or email: info@scraptrident.org www.scraptrident.org