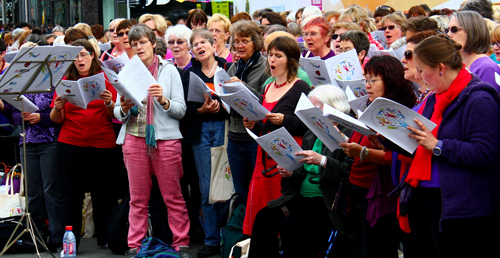 Things are bubbling under in Wales this month, all set to boil over in a series of events and actions that keep the heat on the military-industrial complex and a complicit state. 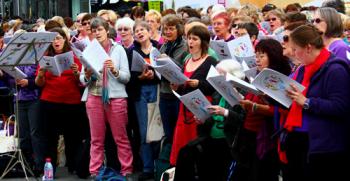 On 23 March in the Morlan Centre, Aberystwyth, there will be a conference of the ongoing campaign for setting up a Wales Peace Institute, ‘Academi Heddwch Cymru’. Speakers will include Jill Evans MEP, Dr Robin Gwyndaf (vice-president of the Fellowship of Reconciliation) and professor Jenny Pearce of the department of peace studies in Bradford University.

In October 2009, a petition of more than 1,500 signatures called on the Welsh assembly for a Wales Peace Institute comparable with those supported by governments in Flanders, Catalonia and elsewhere in Europe.

Across Wales and beyond, Wool Against Weapons is looking for experienced needle-folk and those wanting to learn to come together locally and knit pink scarves. After a series of local actions, knitters and scarves will journey to England to form part of a seven-mile long scarf stretching between the nuclear bomb factories of Aldermaston and Burghfield.

Meanwhile, Anonymous are planning a ‘road trip’ to Aberporth, ‘where they test the killer drones used to murder innocents during wars and test other drones that they wish to use on our own streets against us’.

There is a shout-out for banners, flyers, T-shirts, flags, masks, music and more people to join the protest party from 1pm on 13-14 April.

The Clandestine Insurgent Rebel Clown Army will not be on duty at this action. Oh no. Certainly not. As if….

Friends of the Earth Cymru’s conference 26-27 April features a session asking ‘What is the future of activism in Wales?’

The aim is to explore how to get more people active, and panellists include Jill Evans MEP, Rhian Connick (head of the National Federation of Women’s Institutes Wales), Julian Rosser (head of Oxfam Cymru), and Kelvin Mason, Wales editor of Peace News and all-round trouble-maker.

Singing in the streets

The build-up is also on for 19-21 July when Aberystwyth will host the Street Choirs Festival. First held in Sheffield in 1983 as the ‘National Street Band Festival’, it brought together musicians whose main thrust was playing in the signature marches and protests of a turbulent political decade – Thatcherism, the miners’ strike, the Falklands war....

The intention of the street bands was to put the music into protest, making it creative, fun, engaging and thought-provoking. Through music and song, the over-arching aim, then as now, is to promote a world free of oppression, exploitation, exclusion and violence.

The scale of this ambition is matched only by the enthusiasm and commitment of the street and community choirs who have participated in the festival over the last three decades.

With its roots in the North of England, the festival has blossomed across the UK, most recently being held in Manchester in 2007, moving south to Brighton in 2008, east to Whitby in both 2009 and 2011, ‘home’ to Sheffield in 2010, to Bury in 2012, and now almost as far west as it is possible to get, to Aberystwyth on the coast of Wales.

Since its inception the festival has expanded to welcome community choirs who sing together for a variety of reasons, not least the sheer love of singing!

And, of course, the tradition of political song is alive and kicking, with new compositions from festival participants becoming protest ‘standards’ in an era of failing free-market economics and imposed ‘austerity’ which hits the most vulnerable hardest.

In 2012, the Rise Up Singing initiative brought together many choir voices at an anti-cuts march in London and against nuclear weapons at Faslane naval base in Scotland.

Hosted by activist choir Côr Gobaith under the banner of ‘Peace’, the Aberystwyth Street Choirs Festival will create vital personal and collective connections between all these choirs, united by the potential of music to change the world one raised voice or cocked ear at a time.

The Street Choirs Festival brings street and community singing to towns and cities throughout Britain. Maybe one day the choirs will even raise their voices together with others internationally? Côr Gobaith, who by the way are looking for a new musical director, as well as volunteers to help out with all aspects of the festival, encourage people not only to come and listen, but to join in – to unite the world in song!