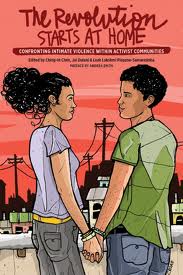 Patrolling the pavement of one of Mexico City’s “red-light” districts, a group of heavily made-up women wearing short skirts and high heels hold placards up to potential clients. These placards read – in words daubed on in menstrual blood – “I am your mirror”. Intermingling with clients and other passers-by, they reflect back their responses, whether puzzled facial expressions or cries of surprise.

This performance piece — put on in February by a group of Mexico City activists — underscores the fact that prejudices and oppressive relationships tie all of us together — female, male, gay, straight, trans, cis, varyingly abled and of differentiated colours and classes — even though the structures that service the ‘needs’ of some through the oppression of others often go unrecognised by the ‘well-serviced’.

Given the pervasiveness of sexual violence within activist circles, there is a real need for organising tools such as The Revolution Starts at Home. This anthology contains contributions from several activists from communities in the US that bear the brunt of systemic violence in that country, including racism and economic exploitation. Here they focus on one manifestation of that violence — intimate violence within their own activist groups.

The book’s contributors work from the reality that for survivors from marginalised groups, the community that both their abuser and they themselves are part of can seem (and often to a large extent is) their only source of support.

The book is therefore especially important for people who can’t expect much from a prison-industrial complex which, if they report abuse, further violates and often criminalises them for the labels they are tagged with: ‘sex-worker’; ‘immigrant’; ‘black ‘suspicious-looking’ youth’. However, anyone who wants to be part of creating environments where all of us are less likely to face abuse — and, if we do, have the ability to be able confront it effectively — may find it useful too.

The anthology ranges from sharing personal stories to providing specific strategies for activists. There’s advice on how to form teams that can support survivors to achieve security and to exercise self-determination. This may include being given the space to talk about the choices they made within an oppressive situation, without feeling that they will stop being the ‘angelic’ survivor everyone wants them to be. There’s also advice on how to help the people who caused harm to become accountable as activists who haven’t yet internalised what working towards social justice requires of them within their personal relationships.

An issue that crops up often for female activists is the scarcity of men working to confront intimate violence. In one chapter, a male participant of the ‘Challenging Male Supremacy Project’ based in New York, describes the groups’ practices, which include involving men whom the perpetrator trusts, respects and can identify with, in the initial outreach from the accountability team.

As an ‘able-bodied’ woman who works as a care assistant, a particularly thought-provoking account was the one by disabled activist Peggy Munson. It can be hard for anyone to escape from a relationship that undermines self-respect and belief in their own agency, but for a person with disabilities there is often the added obstacle of being physically unable to escape.

Munson’s abusive partners were also often the only ones helping to keep her alive, providing vital hands-on care and medication. The prejudices of ableist society, mainstream intolerance of human vulnerability, and the invisibilisation of the unremunerated care-giving that keeps people on their feet (often provided by women and constantly hacked away at by sexism and violence against them) all contribute to the reality that well-being for all is not seen as a collective social responsibility.

As a result, those who visibly provide care for disabled people are often cast as heroes, taking on the ‘burden’ of care-giving. This meant that Munson’s partners could avoid accountability.

The issue is further complicated because, in the case of people with disabilities, less ‘overt’ violent acts — such as leaving their phone out of reach, spraying aerosol that contains chemicals they are sensitive to, or simply leaving a relationship after having become a life-sustaining necessity — can cause serious harm.

I was reminded of my own experience as a carer in an acute hospital ward where patients and their varied life needs change daily. At points in Munson’s account I remember thinking how ‘hard’ it is to work out which seemingly ‘innocuous’ acts are actually intentioned abuse, but suddenly realised that this came from my own ‘abled’ privilege. From the perspective of those who suffer from these acts day-after-day, the point is not how ‘hard’ it may be for the privileged to realise when they are causing other people harm, but simply that it needs to stop.

The Revolution Starts at Home breaks down the intersections of privilege and oppression, not through theory, but by eliciting empathy and/or identification with the stories of predominantly black and brown LGBT, sex-worker and disabled activists. Social justice groups often see themselves as acting in the interests of oppressed groups. But to a large extent, injustice comes from the perspective of the privileged being prioritised in social and political processes, and this carries on inside activist groups.

The tools provided, whilst developed in a US context, may also be useful for UK activists who are trying to confront and change the dynamics of marginalisation within their own circles.