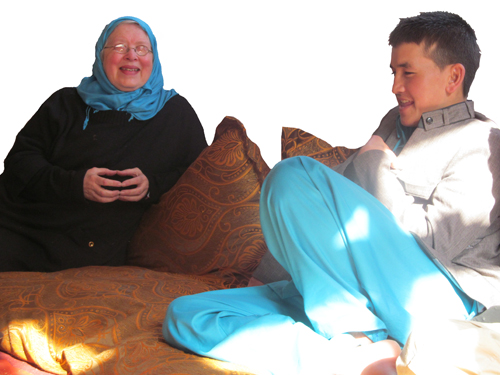 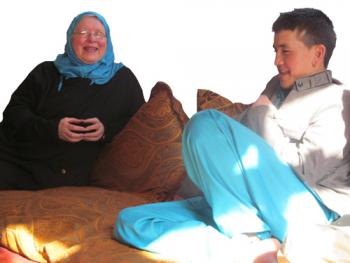 In December 2012, four of us, Susan Clarkson, Mary Dobbing, Maya Evans and Beth Tichborne, went to Kabul, Afghanistan, to stay with the Afghan Peace Volunteers. We went as the first UK delegation of Voices for Creative Nonviolence. VCNV are based in the US and were formed by Kathy Kelly. Several years ago, Kathy wrote in Peace News (PN 2527) about the APV, whom she had met in Bamiyan, and she subsequently visited them when they moved to Kabul.

The APV are a remarkable group of young men. During the 16 days we spent with them we learnt about their life in Kabul, their vision for a peaceful Afghanistan and the projects they undertake locally to help bring this about. In addition, they arranged for us to meet a varied group of concerned Afghans who, in their different ways, were working, despite great odds, to create a just and peaceful society in their war-torn country.

The aim of the APV is to live the kind of life they hope to see in Afghanistan. They are inspired by Gandhi and believe that nonviolence is the way to a better society. They are mainly from the Hazara people but at present they have a Pashtun and a Tajik in their community. Their aim is to have a community of about 16 with all the main ethnic groups in Afghanistan represented. They see that their country has been deeply wounded by ethnic fighting and that true peace can only be achieved by a willingness and determination to transcend ethnic barriers. They are the ones they have been waiting for!

For our time there we shared their life and were present at many community meetings where they thrashed out diverse problems, whether it be major discussions about how to live nonviolently in a violent world, or how to share out the household tasks in a fairer way.

They live simply, in two rooms, and they operate an open house policy. In the afternoons, some of them, alongside female volunteers, run classes for local children in the main language of Afghanistan, Dari, and in mathematics. Each morning Hakim, their mentor, holds an English class for the APV community and for other local youth, male and female. Most of us took part in these classes and often the lesson became a forum for asking us questions about life in the UK and for the students to express their concerns about the future of Afghanistan.

'The world has forgotten us and does not care what will happen to us when the international troops leave.’

The APV home also houses a sewing project for local women: ‘Pandora’s Hope’. Over the past few months, the women have been making duvets for distribution to poor families in the area, for protection against the bitter Afghan winter. The APV coordinate and carry out the distribution of the completed duvets, as well as the sorting and distribution of the materials to the seamstresses, some of whom work at home.

We spent time with these women and, through Hakim’s diligent interpreting, we caught the sense of just how precarious life has been over the past 35 years of war. Most of the people we met had been affected by the decades of conflict, first from the Soviet invasion, then the civil war and the Taliban terror, followed by the US/NATO invasion.

This latest manifestation of war in Afghanistan was, at first, welcomed by the people, but as they became aware that the invaders were doing little to help build a more peaceful and just society, as they had promised, acceptance turned to mistrust and fear.

Women bear the brunt of the fragile situation. We met a woman who had lost two children in a suicide bombing. The fear of such attacks, as well as fear of Taliban resurgence, NATO drone attacks and all the other potential consequences of an unsafe and unstable situation, serve to increase the tensions of parents fearful for the safety of their children.

The APV arranged meetings for us with various groups who are working for a safer Afghanistan. Human rights activists, women’s representatives, workers for transitional justice and disability groups, were among the people we met either at the APV house or in offices in Kabul. Visiting the offices gave us the opportunity to see more of Kabul, a damaged yet dignified city which bears the scars of decades of war. The people who spoke to us, whether grieving mothers or human rights workers, gave the same message: deep unease about the way the international community has allowed war lords to maintain power in government and in their regions, and fear of the future with the withdrawal of international troops.

The APV use the internet to communicate their message to the world. Their website is full of articles and videos which reflect their joys, hope, sorrows and fears. On the 21st of each month they invite people throughout the world to join them in a Global Day of Listening (via Skype). They often have specific campaigns where they collect signatures for petitions and encourage people to join them on Facebook. This online contact is vital for them to know that they are not forgotten and that they can communicate with friends young and old worldwide. Several times during our visit we had the same accusation directed at us: the world has forgotten us and does not care what will happen to us when the international troops leave.

Members of our delegation are working on campaign ideas directed at British members of parliament and the courts, to stress the urgency of helping Afghanistan to a fairer, safer future. We can all connect with the APV on the internet so that they can, in turn, assure the people around them that they are not forgotten.

Susan Clarkson is a member of Oxford Catholic Worker.

The APV have a website called Our Journey to Smile and you can also find videos on YouTube under this name: www.ourjourneytosmile.com
Voices for Creative Non-Violence UK: www.vcnvuk.wordpress.com
Global Days of Listening: www.globaldaysoflistening.org