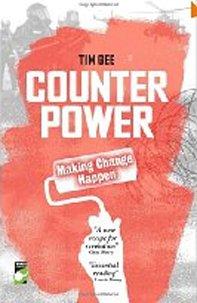 "This book", says Tim Gee at the start of the first chapter, "will make a bold claim. That a single idea helps explain why social movements past and present have succeeded, partially succeeded, or failed. Strategically applied, it has helped win campaigns, secure human rights, stop wars and even bring down governments."

The central idea is Counterpower, which he describes as "the resistance of the oppressed". There are three types of Counterpower: Idea Counterpower which challenges the dominant ideology on an intellectual level, Economic Counterpower such as strikes and boycotts, and Physical Counterpower. The latter involves "Literally fighting back, or, alternatively non-violently placing our bodies in the way of injustice". Analysing historical examples such as the Indian independence movement and the anti-Vietnam War protests in the US, Gee argues most of the successful movements for transformational change have used all three kinds of Counterpower, while many of those that have been unsuccessful have used only one or two. The chapter on the Anti-Apartheid movement is particularly impressive and will be especially interesting to younger activists who will not have been personally involved in the struggle.

An interesting by-product of Gee's survey is the realisation that it has been those who were considered "extremists" and "unrealistic" who have been proven right in terms of making progressive change, while so-called moderates tend to get swallowed up by the very centres of power they are supposedly opposing. There is also a short discussion of the relative merits of nonviolent and violent forms of protest, a recent study of 67 revolutions showing levels of democratic rights were far higher in countries that had used nonviolent methods to achieve democracy.

Gee, who is involved in numerous grassroots campaigns like the student and Occupy movements, says he wrote Counter Power "for anyone who is involved in movements for justice today". However, I think the bookís main strength is its potential relevance and accessibility to people beyond activist circles. Frustratingly there are no page numbers contained in the footnotes, making further research difficult. One wonders too if the book is simply making explicit something activists know all too well already.

These, though, are minor quibbles about a very important and positive book that deserves to become influential in the months and years ahead.