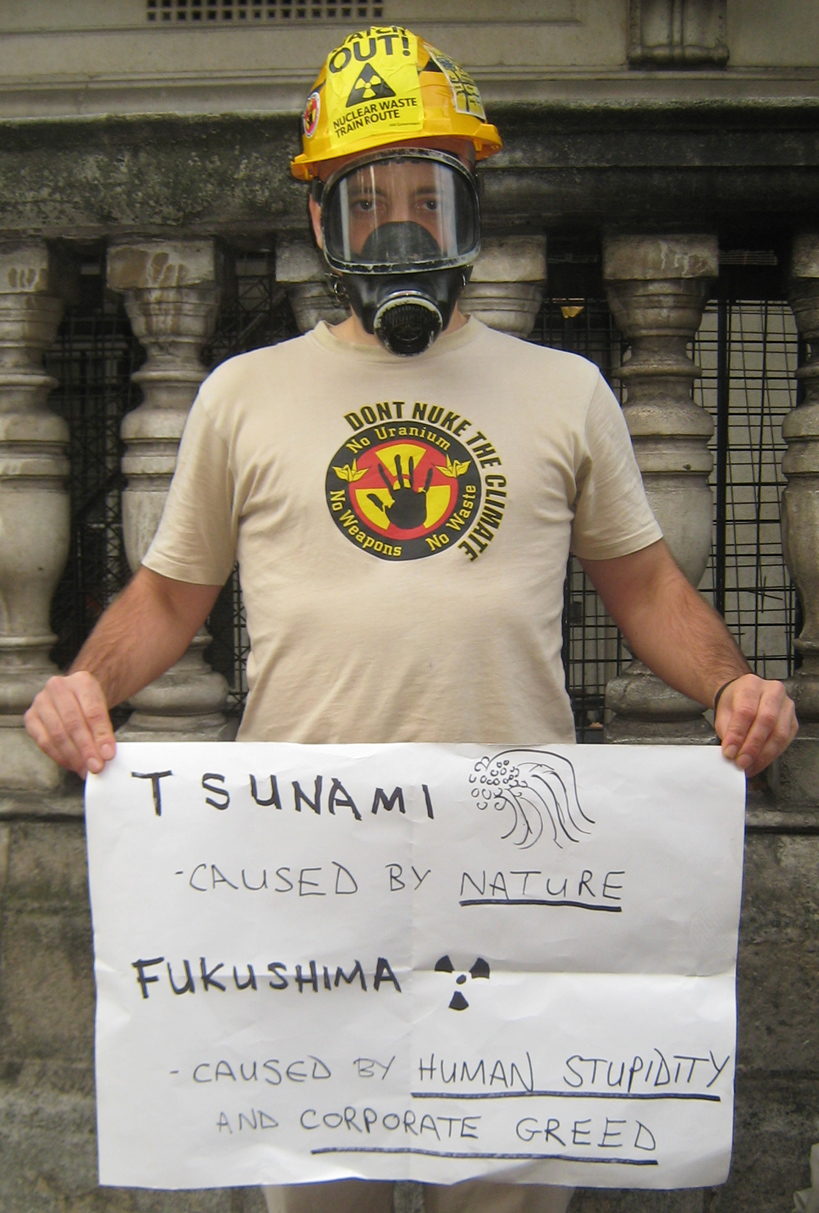 It's too early yet to say post-Fukushima, says Philip Steele.
01 Dec 2011 Feature by Phil Steele 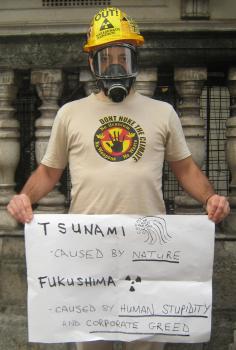 Dan Viesnik outside the Japanese embassy, London, 2 November. One World, No Nukes delivered a petition to stop the shipping of contaminated rubble from Fukushima to Tokyo. PHOTO: Kick Nuclear

Post-Fukushima, did I hear you say? Eight months later, we should still be speaking of the Fukushima-Daiichi disaster in the present tense. After the earthquakes, after the tsunami, after the explosions, after the triple-meltdown, after the massive leaks of radioactivity into land and ocean, the drip of news (now relegated to the back pages) still raises grave concerns.

The true situation in the reactor basements remains unknown. Accidents are still occurring:†on 18 October, another 3 tons of radioactive water leaked at the Fukushima No 1 plant. On 2 November, the Tokyo Electric Power Company (TEPCO) reported evidence of new nuclear fission at the No 2 plant, raising questions as to whether cold shut-down can be achieved by the end of this year. The Japanese governmentís 30-kilometre exclusion zone has not prevented large numbers of children being exposed to unacceptable radiation levels. Decommissioning? At least 30 years.

Within days of the events of 11 March, TEPCO, the Japanese government, the global nuclear lobby, the British nuclear industry and its journalists all hit upon the same emergency response ñ an urgent public relations campaign. The plan for containment consisted of burying bad news.

Recent studies reveal that the complacency thus engendered may indeed have been misplaced. A report pending peer review, featured in the journal Atmospheric Chemistry and Physics (Stohl, A et al Atmos Chem Phys Discuss 11, 28319-28394; 2011) suggests that xenon-133 emissions may have begun before the tsunami struck, and that the plucky little power plant did not withstand the initial quake, as had been claimed. The report also suspects that estimates of radiation released during the disaster may need to be doubled from previously accepted figures. Caesium-137 emissions may have amounted to 42 percent of the levels of the 1986 Chernobyl disaster in Ukraine.

It is well known that nuclear disasters, civil or military, have a slow-burning fuse. That is the nature of radiation risk. As a resident of North Wales I am only too aware that 355 farms in Snowdonia still have restrictions on land use and movement of sheep following the Chernobyl disaster. The rush to judgment over Fukushima was shockingly premature.

The same could be said of the report by Dr Mike Weightman, chief of the UK Health and Safety Executiveís Nuclear Directorate, published on 10 October. Weightman's aim was to assess UK nuclear installations to see whether a Fukushima disaster might be replicated here. Since the United Nations' action plan will not be published until March 2012, and the Convention on Nuclear Safety will not meet to consider the lessons to be learned from Fukushima until August 2012, the Weightman report might be seen as part of a political rush to shore up confidence in nuclear new-build. History should tell us that political expedience is the mother of all nuclear disasters.

Despite the fact that the EU's final report on the stress testing of existing European reactors will not appear until the end of this year, Weightman races ahead to proclaim no fundament-al weaknesses in the system. He effectively gives a green light to nuclear development in Britain, although one would have expected a different conclusion, given his 38 recommendations for improvement.
Weightman considers seismic risk, flooding and emergency procedures, but fails to address at all many other areas of concern, such as terrorism, cyber-attack (witness the 2010 Stuxnet malware attack on the Bushehr reactor in Iran) or direct impact by aircraft.
In my own neck of the woods, the proposed Wylfa B station would be less than a minuteís flight away from an airbase where the RAF trains overseas pilots on the latest fighter jets. No risk assessment?

Chris Huhne, secretary of state for energy and climate, when in opposition an outspoken opponent of nuclear new-build, blithely announced: "The report makes it clear that the UK has one of the best nuclear safety regimes in the world". Well, if that is the case, doomsday is nearer than we feared.

Dr Paul Dorfman of the Nuclear Consultation Group also pointed out the lacunae in the Weightman report, quite rightly highlighting the inadequacy of emergency planning zones around nuclear plants.

Returning to the example of Wylfa B, the nuclear power plant would be sited on an island, Anglesey, which has only two highly congested bridges as exit points - any evacuation would be impossible. Dr John Large, the internationally-respected independent nuclear consultant, described the Weightman report as "whitewash".

I would suggest there is a wider problem. Across many policy areas, good scientists often fail to see the wood for the trees. They underestimate the chances of human error. They fail to see that something as mundane as a leaking gutter could set off a dangerous chain of events. They fail to take account of political context or of the broader perspective of history.

Letís look at Wylfa B again: the plan is to store on site spent fuel which is twice as radioactive as current legacy waste. The spent fuel will be too hot to handle for up to 160 years. What will be the state of the nation then? Who knows? And then?

There is still no answer to the long-term storage of nuclear waste over the millennia. Focus on the technology by all means, but never ignore the fact that progress may falter, that social or political cohesion may break down, that an economic meltdown or a war could cause a nuclear meltdown, that it is impossible to guarantee a safe and technologically-advanced future.

Time to get out!

Some governments are being more circumspect. Scotland, Germany, Switzerland, Italy and Australia have all rejected nuclear new-build because their eyes have been opened by Fukushima.

Worldwide, public opinion has begun to swing against the nuclear industry. German investors see the future lying in renewable energy, and they are right. By the time the new reactors could be built, they could be redundant, overtaken by new and ever cheaper photo-voltaics, by a single European grid, by various and more sustainable technologies, by improved conservation and energy efficiency. All these things could be done, but they need political will, a will currently diluted by the nuclear obsession.

The industrial impact of Fukushima is already profound. Uranium prices have fallen. The giant Siemens corporation decided to give up on nuclear in September 2010. The nuclear consortia lined up for the UK are beginning to wobble too. SSE has pulled out of the NuGeneration consortium. German-based RWE-npower are reported to be discussing with partners E.ON a pull-out from Horizon Nuclear Power. EDF, bogged down by massive overspend and delays at their EPR projects in Finland and Normandy, has declared a delay on four new-build projects in the UK. Maybe they are waiting for shedloads of taxpayersí money to make it worthwhile.

Never let it be said, Mr Huhne, that there would be bribes or subsidies from the taxpayer. Perish the thought!

If the economics donít work out, that is grand. But please, county councillors, MPs, MEPs, Welsh AMs, please remember that other kinds of jobs ñ and safer ones ñ can be created. Please remember too the real reason we donít want nuclear power: it is potentially dangerous, with long-term global consequences.

The proliferation of nuclear materials is a threat to world peace and security, for civil and military nuclear have always been inextricably linked. Uranium mining damages whole communities. Could Fukushima be replicated in the UK? Maybe not precisely, but as a general principle, a disaster of that magnitude could indeed occur. Of course it could.

The nuclear renaissance is not a done deal. Blow at that house of cards right now and we might just bring it down.

Philip Steele is a member of People Against Wylfa B, a community group opposing nuclear new-build in North Wales:
www.stop-wylfa.org/wp