Just Do It: A tale of modern day outlaws. Directed by Emily James 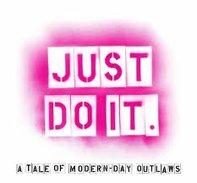 Emily James spent a year embedded in the environmental direct action movement with groups like Plane Stupid, Climate Camp, Bike Block and others, gaining their confidence and trying to capture the passion, commitment, and excitement of putting direct action into practice.

The resulting film is a dense, fascinating, fast-moving work in which we meet and follow a variety of individuals, and hear stories from their lives as activists. We see them in action at the Vestas wind turbine factory occupation, the Blackheath Climate Camp, and the Copenhagen climate talks protests. We learn about consensus decision-making, blockading tactics, lock-ons and legal consequences. And we see the reactions of the authorities at first hand, not least when the film-maker is forcibly detained by Danish police!

I enjoyed the film, for several reasons. A lot of the faces and campaigns were familiar, which gave extra personal interest, and I suspect many PN readers may be in the same position as me in that respect. It's a well-made film that looks and sounds great and communicates the excitement and realities of direct action very well.

On the minus side, it felt too long. It might have worked better as a short film; alternatively a stronger unifying narrative could have made the feature-length format work better. I would also have loved to have seen something in the film about the history of direct action, and also more about the politics and arguments behind the actions covered. But such retrospective comments seem churlish. Just Do It should be widely watched, as a very important piece of documentation and propaganda for environmental direct action that has succeeded for once, in part at least, in reaching out of the activist ghetto. That alone is a major achievement for a film on activism.