Eddie Linden, A Thorn in the Flesh: Selected Poems 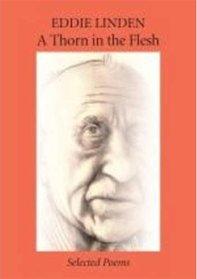 The well-titled A Thorn in the Flesh is the latest book from the indefatigably wondrous poetry publisher Hearing Eye. It contains 37 (mostly short) poems from the equally wondrous Eddie Linden.

I've heard of Eddie, know of his place in, and impact on, the poetry scene but, prior to this book, had encountered only one poem - and that in an Hearing Eye anthology. Now Iíve made his literary (not physical) acquaintance, I understand the impact he made when he arrived from Scotland in the 1960s. The book has an informative blurb and an enthusiastic foreword which tells you everything you need to know in order to relate to his "pacifism, his sexuality, his conflicts with the Catholic Church".

The poet/publisher/hand-set printer/pamphleteer, Dennis Gould, remembers meeting him for a while outside Hampstead tube station where Eddie sold the pacifist-anarchist paper Catholic Worker and Dennis sold Peace News. Dennis, too, knew little of his work but, like me, was astonished that Eddie had managed to launch, in 1969, his still extant poetry magazine, Aquarius, and elicit the support and patronage of top players in the poetry league. Eddie had an appallingly deprived upbringing in Scotland and claims that "I just lived for it. The thing that saved me - this creative thing - it changed my life".

As to his words: they are as much a social document as poetry and he is a legendary performer of them. They are by turns, savage, angry, witty, and speak of desolation as well as reconciliation. He speaks plainly and, at best can land you one like a heavyweight boxer...

Then the poet arrived,
fully clothed,
only to find
vultures
ready to strip him down
mentally, and
leave him naked to the world.
What have you found
underneath his flesh?
Nothing.
Then for godsake
leave him alone.